Private Players Are Making Government Schools Obsolete Across The Country 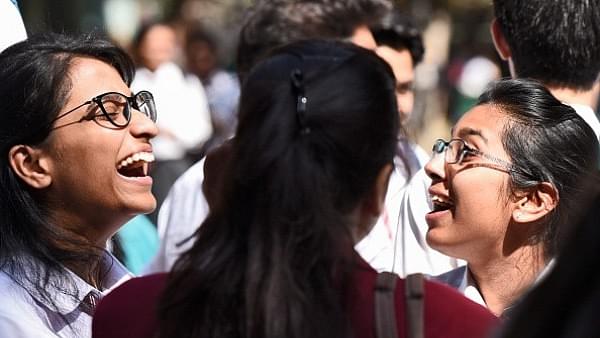 Students at a private school. (Burhaan Kinu/Hindustan Times via GettyImages)

The debate around private and state schools is gathering momentum. For the millions of newly urbanised Indians, the prospect of sending their children to private schools fits in with their belief of a better future ahead. Given how private schools have managed to brand themselves in this digital age across tier-1 and tier-2 cities, and the emergence of new players in education, enrolment decisions are now taken on the basis of visible infrastructure, student-teacher ratio, and availability of co-curricular activities, while some critical factors pertaining to education have taken the back seat.

When it comes to school education, there is more than meets the eye. For starters, the increased visibility of private schools does not necessarily amount to quality education, better-paying capacities for the staff members, or a significant shift in enrolments from government to private schools. Two, bureaucratic sanctions and policies for private schools are curated around a few prominent players, thus presenting a skewed picture. With many private unaided non-recognised schools also in the fray across states, one does not get the complete picture when evaluating the performance of children studying in private schools.

While the success of Right to Education (RTE) is debatable, it must be lauded for bringing all schools under a single roof by warranting mandatory registration. This has ensured visibility of non-recognised aided/unaided private schools that were earlier operating without any recognition.

Before digging into the intricacies of enrolments across private and state schools, one must have clarity with the segmentation of the former. Clearly, state schools are funded by the government. Besides, there are private aided schools that function like state schools, teachers are selected via a State Education Service Commission and, unlike private unaided schools, are paid at par with the ones in state schools.

Referring to the data in Table-1, where the percentage of children studying in private schools has been discussed, one realises that the spread of private education is far more prominent in urban areas than it is in rural areas. Segmented across different age groups, one comes across a stark variation for enrolment in the 6-10 years age group, with 49 per cent in urban areas and only 21 per cent in rural areas. For starters, every second parent is opting for a private school for their child when it comes to primary education. The low enrolment in rural areas can be attributed to the lack of private players in villages and economic backwardness.

The difference continues to remain stark for the 11-14 years age group with 40.7 per cent urban enrolment and 17.5 per cent rural enrolment. The cause for decline in numbers warrants investigation, for some factors are leading to students leaving private schools after completing their primary education. This could be attributed to high costs, lack of imparted quality in education and constraints in urban areas, and lack of infrastructure, child labour, and social constraints in rural areas. The situation continues to grow dire for urban areas, as the enrolment for 15-18 years age group reduces to 36 per cent with a small, unexplained rise in rural areas at 24.5 per cent.

For private schools (private unaided schools), the national rural employment percentage hovers around 20.8, while for urban areas, it is 42.1, almost twice as much. However, these numbers are without stark variation across different states.

Referring to the data in Table-3, one witnesses significant improvement in urban enrolment numbers. However, the variations here are quite visible. Jammu and Kashmir, at 37.1 per cent, has almost thrice the state enrolment of Maharashtra, at 13.1 per cent. For the northeast states which include Arunachal Pradesh, Manipur, Meghalaya, Mizoram, Nagaland, Sikkim, and Tripura, rural and urban enrolments are 17.1 and 32.9 per cent respectively.

Across Table-4, the variations continue to grow. Telangana, a state recently carved out of Andhra Pradesh, has 62 per cent state enrolment against West Bengal, which registers only 10.2 per cent. Interestingly, Telangana has the highest urban enrolment in private schools at 77.6 per cent, followed by Rajasthan at 70.1 per cent, and then Haryana and Andhra Pradesh at 67.2 per cent and 64.5 per cent respectively.

Uttar Pradesh, Rajasthan, and Punjab have over 40 per cent state enrolments in private schools.

Thus, as we observe from these tables, the rural and urban enrolments in private schools across India must not be confused for a national trend but studied for different states, given the prevailing variations.

Even with 74.5 per cent of government schools (including schools run by Education and Tribal and Social Welfare Departments, and local body and other central government schools), why are we witnessing a surge in enrolments in private schools?

The increased enrolments in private schools, especially in urban areas, can be attributed to several factors. First, increased focus on branding by private schools in cities like Gurugram, Noida, Hyderabad, and several other tier-1 and tier-2 cities has inspired the urban middle-class to opt for private schools. Second, the lavish infrastructure offered by schools, especially some chains in the National Capital Region, are no match for the otherwise conventional facilities offered in state schools, thus adding to the shift. Three, the indispensability of English as a language is a catalyst in the same decision-making process. Four, the increasing number of private institutions has driven admissions away from government schools, raising alarms in the Ministry of Human Resources and Development.

Even with the RTE and schemes like mid-day meal in play across government schools, the private schools are witnessing increased enrolments. So, where does it leave the state schools and what must they inculcate in their current operational structure to curb the widening gap?