Pune Pattern: How RSS Is Battling Covid-19 In The City, One Home At A Time 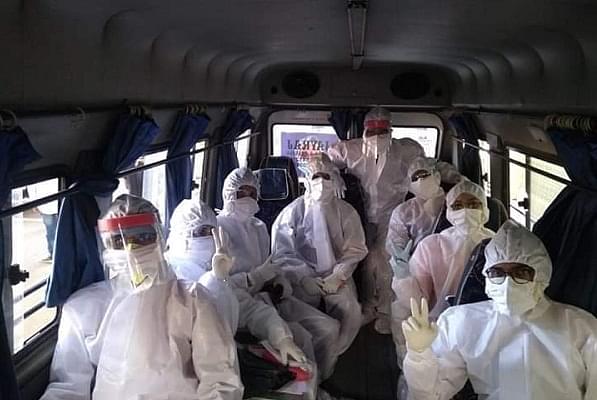 The temperature in Pune is 40 degrees centigrade. Samruddhi Jathar walks into a narrow lane in Bhawani Peth, one of the Covid-19 hotspots of Pune.

It is a densely populated neighbourhood with closely packed small houses on both sides. It is oppressively hot. There is no breeze, no sunlight, just a dark narrow lane flanked with closed iron doors on both sides.

It is unusually quiet, even though the time is 11 am.

As Samruddhi knocks on a door, her PPE kit crackles with the movement, her gloved hands catching a Covid-19 kit are sweaty, her mask is sticking to her face.

The door opens to reveal a woman in her late 40s, her look not very welcoming.

Samruddhi tells her that she is a volunteer who has come to conduct Covid-19 testing as part of the ‘Punekar Fights Corona’ campaign spearheaded by the Rashtriya Swayamsevak Sangh Jankalyan Samiti (RSSJS).

Samruddhi and her team have a long day ahead of them. They walk door-to-door in this stifling heat, convincing people to test for Coronavirus.

They have to quench their thirst with carefully measured sips of lime water, as visiting any hygiene facility is out of question.

Getting out of the PPE kit before the day’s work is done is impossible.

After six hours of non-stop walking going from door-to-door, conducting tests, and convincing people, Samrudhhi and her team will return, completely exhausted — not to their homes, but to the volunteer camp run by the Rashtriya Swayamsevak Sangh Jankalyan Samiti (RSSJS).

What makes the feat amazing is the fact that Samruddhi is a student who has volunteered to participate in this door-to-door Covid-19 screening drive.

She is not a front line health worker or a government employee.

She is a member of civil society, who has decided to be part of the screening campaign out of her own volition.

Samruddhi is not alone. Over 800 people, including 250 health professionals from the private sector and over 600 ordinary citizens have volunteered to be a part of the ‘Punekar Against Corona’ campaign.

So what drives so many people to respond to an appeal to volunteer to go door-to -door in some of the most dangerous Coronavirus hotspots, staying away from their homes for more than a week and agreeing to a forced quarantine of 5 days, fully aware of the risks they are taking on?

It can only be one thing. The spirit of Seva.

At a time when the state of Maharashtra is battling the deadly pandemic called Covid-19, the Rashtriya Swayamsevak Sangh (RSS) is doing what it does best — relief work under the most trying of circumstances.

An interesting ‘Pune Pattern’ is emerging as an effective case study to identify and contain the spread of the virus.

It involves teams of trained doctors and Sangh volunteers going door-to-door in the Covid-19 containment zones and conducting tests to identify infected patients.

The numbers are impressive. In less than three weeks, more than 13,000 households in containment areas have been covered by this team of volunteers and doctors in a stupendous effort.

‘Punekar Against Corona’ is a combined effort by the Rashtriya Swayamsevak Sangh Jankalyan Samiti (RSSJS), Pune Municipal Council and PPCR (Pune Platform For Covid-19 Response) — an initiative by the Mahratta Chamber of Commerce, Industries and Agriculture (MCCIA).

The city of Pune is seeing one of the worst outbreaks of Covid-19 in the country. The city administration has identified over 60  Covid-19 containment zones in Pune. Most of these containment zones are located in densely populated areas, where tiny dwellings stand cheek-by-jowl and hygiene facilities are common across households.

It is easy for government authorities to be overwhelmed at this time fighting the pandemic on so many levels.

Understanding the need to increase testing in containment zones to fight the Coronavirus spread, the RSSJS came forward to start one of the largest volunteer driven civil society initiatives in the country to combat Covid-19 — door-to-door mass testing for Coronavirus — in the identified containment zones.

On 24 April, RSSJS first sent out appeals to the medical community and civil society requesting for volunteers to do door-to-door screenings in containment areas identified by the Pune Municipal Corporation.

The appeal received a wide response. More than 250 medical professionals volunteered, including some of the most respected names in their field like oncologist Dr. Anantbhushan Ranade, Surgeons Dr. Parag Sahasrabudhhe, Dr. Shaunak Sule, Dr Manish Dastane and many others.

Apart from the doctors, 675 RSS Swayamsevaks volunteered for this effort, including several women.

The medical professionals and Sangh volunteers who agreed to give their time to conduct mass screenings in containment areas were called for training at designated centres.

They were clearly apprised of the risks and were informed of the safety protocols to be followed while conducting door-to-door screening in infection zones.

The training sessions were attended by the municipal authorities, medical professionals as well as senior Sangh functionaries like Shri Ravi Wanjarvadkar, who has considerable experience in disaster management.

After the first training session, door-to-door screenings were started from 27 April. The screening campaign is a result of seamless cooperation and coordination between municipal authorities and civil society, spearheaded by the RSSJS.

While the PMC provides logistical support like police presence and ambulances for the volunteer teams to travel and testing kits, PPCR (Pune Platform For Covid19 Response) — an initiative by the MCCIA — has sponsored the PPE sets, safety gear and other things needed for the campaign.

The RSSJS, the disaster management arm of the RSS, is spearheading the entire campaign by identifying volunteers, training them, running adequate facilities for their quarantine needs and the massive coordination that an effort of this scale needs.

It is not easy work. Volunteers have to be constantly on their feet for more than seven hours, clad in their PPE kits, masks and gloves in 40 degrees heat.

Access to hygiene facilities is limited. They have to follow a strict treatment protocol and most importantly, they cannot return to their families while on the job.

After their rota of five days is over, the volunteers have to stay in quarantine for four days in designated facilities run by the RSS.

The volunteers are then tested for Covid-19 infection on the fifth day. They can return home only if the results come negative.

However, the RSS volunteers seem to be undaunted by these challenges, as they go about their work.

I spoke to a few volunteers about their experience of Coronavirus testing in containment areas.

A great example is the Thakar family. Abhay Thakar, his wife Rajashri and daughter Samruddhi all volunteered for the screening.

Their decision was supported by the 82-year-old matriarch of the family, Abhay Thakar’s mother, who agreed to be on her own for the 10 days of the screening and quarantine.

The Thakar family would leave their volunteer camp in the morning in an ambulance provided by the Pune municipal corporation, fully equipped in a PPE kit, mask and gloves and go from door to door in  the containment areas, convincing people to do testing.

Many of the containment areas like Bhawani Peth and Kasba are Muslim majority neighbourhoods.

The volunteers initially had a tough time convincing residents to get screened, but they never lost their enthusiasm.

Rajashri says that spending the whole day in a PPE kit in the hot Pune summer was uncomfortable, but as it was an opportunity to do something for the society, she continued to persevere.

Another volunteer, Rutuja Mahendra Jadhav, a final year student of Ayurvedic medicine who took part in the mass screening campaign says, ‘The toughest part of the campaign was to stay inside the PPE kit the whole day while walking around in the hot sun, going from door-to-door convincing people to test’.

However, she says, it was an unforgettable experience for her to participate in a campaign like this, and it enriched her as a human being.

He is leading a team of volunteers for the mass screening campaign. He talks about the high enthusiasm and commitment of both the medical professionals as well as of the young volunteers who have undertaken this huge task.

Siddhant Prakash Shinde, a young Sangh volunteer from Karvenagar was one of the first people to volunteer for this campaign.

He says participating in this campaign was a huge learning experience for him. The area assigned to him was Bhawani Peth, one of the most congested areas of Pune and a Covid-19 hotspot.

Siddhant says he was shocked to see many of the homes he visited still displayed anti-CAA propaganda posters.

He says the posters made him angry at first, but then he was only filled with pity and compassion, as he realised that right now, the priority is to ensure that the Covid-19 infections are contained and not allowed to spread.

He said he and his team had to convince people in the area to participate in the testing, and initially, he saw a lot of resistance.

But seeing the dedication and the efforts of the volunteer team, many of the residents relented.

The young mayor of Pune, Shri Murlidhar Mohol as well as the deputy municipal commissioner of Pune, Ms. Rubal Aggarwal have publicly acknowledged the efforts of this campaign led by the Rashtriya Swayamsevak Sangh.

Both have spoken glowingly about the success of this testing campaign as well as about the unstinting efforts and dedication of the RSS to fight Covid-19 infections in the city.

In his Ramnavami address, RSS general secretary Suresh Bhaiyyaji Joshi had pointed out that over 100,000 RSS Swayamsevaks have been actively involved in various aspects of Covid-19 relief work all over India, including distribution of relief material, helping stranded migrants and the elderly, looking after students, among others.

The ‘Pune Pattern’ is just another addition to the exemplary Seva carried out by the volunteers of the RSS under trying circumstances.

The fight against Covid-19 continues, as the country gets ready for phase 4.0 of the lockdown, but the determination and efforts of these volunteers will continue to instill hope in people who are most affected by this crisis.

As Siddhant Shinde put it eloquently, ‘it is the dharma of the Swayamsevak to do seva in the times of any crisis’.