Random Meditations Through Her 1000 Names (15 and 16): Crescent And The Full Moon 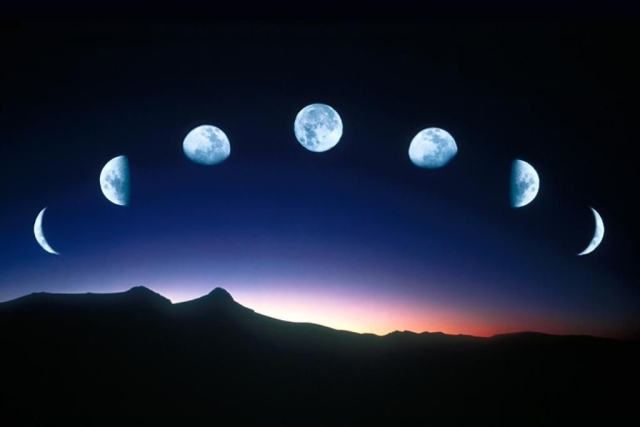 The Goddess emerges from the sacrificial fire-pit, chit-agni-kunda. First, her hair, adorned with a variety of flowers, appear.

So, she is the one with her forehead shaped as the eighth-day crescent: Ashtami-chandra-vibhraja-dalika-sthala-shobhita.

Then, the face emerges.

If her forehead is shaped like the perfect crescent, then her face itself is like the full moon. However, the moon has a little blemish.

The dark, smooth area which can be seen by unaided eyes on the bright surface of the moon had many cultures imaginatively think of it as an old man, rabbit etc., on the moon. Indian culture also saw in these dark shapes a rabbit and a deer.

However, in the Sri Lalita Sahasranama, it is the musk attained from the deer that is applied on the Goddess' face that parallels the lunar maria: Mukha-chandra-kalankabha-mriganabhi-visheshaka.

If we combine the comparison of the crescent moon of the eighth day(s) of (the waxing and waning of) the lunar cycle to the forehead of the Goddess and her face itself to the moon (implicitly suggestive of the full moon) then what we have here is a continuity of a very primordial connection - once present throughout the world but now found in its full bloom and all diversity only in Hindu Dharma.

In 1963, with the race to the moon and all, an archeologist, Alexander Marshack, was researching about the technological evolution of humanity - from tool-making to ultimately moon landing.

Pondering about the seemingly sudden big-bang in the cognitive skills and subsequent development in writing, mathematical skills, astronomical observations etc., he thought that there was a serious gap in the archaeological record.

Painstaking work and microscopic studies of old stone age artefacts (paleolithic age) made him put forth a thesis that palaeolithic people used a system of lunar notation at least as early as 30,000 BCE.

Feminist scholars of religion, Anne Baring and Jules Cashford, based on the work of Marshack, point out how the waxing and waning of the moon became important for the stone age people.

The passage is worth producing in some detail:

For Palaeolithic people, whatever they observed was defined by a seasonal rhythm. ... The moon was undoubtedly the central image of the sacred to these early people because, in its dual rhythm of constancy and change, it provided not only a point of orientation from which differences could be measured, patterns conceived and connections made, but also, in its perpetual return to its own beginnings, it unified what had apparently been broken asunder. As the great light shining in the darkness of the night, the moon, ... was regarded as one of the supreme images of the Goddess, the unifying power of the Mother of All. She was the measure of cycles of time, and of celestial and earthly connection and influence. She governed the fecundity of woman, the waters of the sea and all the phases of increase and decrease. The seasons followed each other in sequence as the phases of the moon followed each other. She was an enduring image both of renewal in time and of a timeless totality, because what was apparently lost with the waning moon was restored with the waxing moon. Duality, imaged as the waxing and waning moon, was contained and transcended in her totality.

Anne Baring & Jules Cashford, The Myth of the Goddess: Evolution of an Image, Penguin UK, 1993, p.21

In the Sahasranama, we have both the crescent and the full moon imagery.

The interesting aspect here is the specific mention of the ashtami or the eighth day crescent in name 15. The reason is not far to seek.

As the Vedic Mother Goddess Aditi, she has connections with ashtami.

The number eight was regarded especially sacred to Aditi as she is celebrated to have eight wombs, eight children and the eighth night (or eighth lunar day in each half-month, the Ashtami) is enjoined for offering her libation. A goddess is mentioned by the name Ashtaka or Ekashtaka who apparently personifies the eighth day after the full-moon of the new year. She is celebrated to be a divinity of great importance and a goddess bestowing riches, children and happiness on her votaries. In Atharva Veda III. 10.1-13, she is lauded as the mother of Indra and Soma, the daughter of Prajapati and the consort of the Year. Doubtless she was supposed to be identical with Aditi for Indra and Soma are her sons. As may appear from the Atharva Veda and Taittiriya Samhita originally this word represented a sort of new-year festival held on Ekashtaka or the first eighth day after full moon, and was deified as a goddess. Later, the Ashtaka days are raised in number in the Grhyasutra texts and the term ceases to enjoy the status of a goddess.

Sri Aurobindo considers Aditi as the undivided wholesome Consciousness. To him Aditi is:

Goddess of infinite being, mother of the gods, the indivisible consciousness, the Light that cannot be impaired, imaged by the mystic Cow that cannot be slain.

The association of Aditi with cow and dawn has another amusing parallel with the Egyptian Goddess Hathor, who was venerated by ancient Egyptians as the sun goddess, moon goddess and as the divine cow.

Hathor was the sacred cow goddess of Egypt, identified with the moon, as was the cow itself, perhaps because of the connection between cows, the lunar phases, and agricultural fertility. Hathor’s connection to fertility also associated her with the rise of the Nile River and the corresponding rise of the star Sirius, whose first yearly appearance signified the water’s rise. In representations of the great goddess, Hathor was often depicted in a horned headdress with the disk of the moon or Sirius between her horns.

S.B.Roy, who pioneered work on chronology in India and who was considered by archaeologist B.K.Thapar as the ‘authority’ on ‘ ethno-astronomy’, also associated the discovery of cycles—seasonal as well as feminine and even the discovery of Rta—to Aditi, whom he considered as a matriarch Vedic seer:

Then followed astronomy i.e. the knowledge that seasons were connected with the moon and the stars. According to the Indian tradition the credit for this discovery goes to a great matriarch who was deified as the mother goddess Aditi — the mother of devas — i.e. the mother of the gods of time. ... Aditi, the great matriarch, first discovered the connection between the stars and the seasons. She started the year with full moon at Aditi, and Aditi (Pollux) was made the autumn star. Pollux was the autumn star in c. 6100 B. C. ... The grand discovery of the Mother Goddess Aditi was that the same law embedded in the root word RIT, governed phenomena of the heavens, phenomena of seasons and phenomena of a female body. The peculiarity of the earliest Upanishads is that they seek to give all the interpretation simultaneously to the same hymn, because in the Upanishads, the concept of Atman is expanded to contain the entire cosmos ; The cosmos and the body is permeated by ONE SOUL which is not only personal but cosmic as well. This concept sharply distinguishes the Indian weltanschauung from al other philosophies and life-views.

Most probably, the historicity of Aditi may be a far-fetched speculation. Yet, it is also possible that Aditi was a historical Vedic seer who discovered cycles, in celestial spheres, terrestrial phenomena and also the feminine body, ultimately discovering Rta.

That way Aditi comes far anterior in a tradition that later produced the great woman mathematician Hypatia. If true, then we see the way human culture had decisively made a U-turn towards dark ages in the West when St. Cyril brutally killed the scientist-philosopher Hypatia.

But here, Aditi became what she discovered - the Goddess who contained in her all diversity and who permeates all existence as Rta. And in the cycle of moon, her symbolism shines.

Irrespective of Aditi’s historicity, she represents pure undivided Consciousness as Sri Aurobindo put it, and that is what Sri Lalita is . And through her names, we are able to reconnect with the ancient Vedic Divine Feminine, which shines through all our traditions, uninterrupted.

As we shall see, the moon symbolism, symbiotic with the Goddess tradition, found its fulfilment and full blossom in all its diversity in Hindu Dharma. In Sri Lalita Sahasranama, we will find again and again proof for that unique spiritual heritage of all humanity.

Today, Hathor is remembered in past-tense. Hypatia is seldom remembered so that Christian sensibilities will not be hurt. Most of the names of great goddesses are only of academic interests and their forms in museums—often mutilated—seldom venerated.

But when we utter the names 15 and 16 in the Sri Lalita Sahasranama, let us also remember that we carry the responsibility of being the last living guardians of the Goddess tradition.