Random Meditations Through Her 1000 Names - I 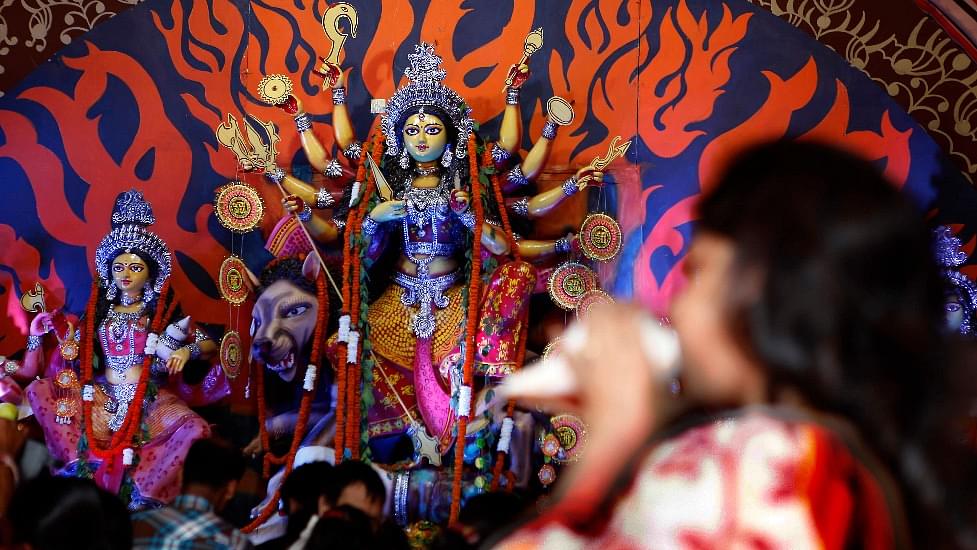 As the Tamil month of Adi commenced yesterday, the land is ready to be filled with the celebrations of the Goddess. This is an attempt to join those celebrations by randomly walking through her names as listed in the Sri Lalitasahasranama - the thousand names of the divine feminine, and meditating over them verbally. This is not a scholarly attempt to describe her names. These are just emotional associations that come and get developed as a name evokes them.

‘Sri Mata’ is the first name. She is the auspicious Mother. Traditional commentators point out that Sri can mean 'Lakshmi, Sarasvati, nurse or earth (dhatri), varga (group or family), prosperity, success, beauty, means of subsistence, the decoration of ornaments, wisdom, and the first day of the fortnights'. This they do based on the authority of Vyadikosa - a lost pre-Amarakosa lexicon, whose passages have been cited in many works. Simply stated, she is the origin of all categories.

The term ‘ma’ also means ‘to measure’. This demands more attention. Measurement is considered as the primal act of creation. According to Rig Veda, from the primordial undifferentiated chaos , the three strides of Vishnu made the orderly universe emerge (Rig Veda: 1.154). The creative power of Vishnu is also depicted as the divine feminine. Vishnu Maya, is incidentally, the 339th name.

Modern physics also links the act of measurement to creation at the very fundamental level. Physicist Reinhold Blumel considers quantum mechanics as 'more than a physical theory of nature' and as a 'quantitative philosophy' that describes 'the innermost workings of our worlds at its most fundamental level'. He explains:

In ancient pagan Greek tradition also, we find ‘metre’ and ‘mother’ etymologically related. The word ‘metre’ is linked to the womb as 'mother of all the embryos borne of it', which is how Serenos (physician who lived around 92 CE) describes the term. The term ‘Metropolis’ means mother-city. ‘Matter’ and ‘matrix’ are also related etymologically to ‘mother’.

With the ascendancy of Christianity, the divine feminine increasingly retreated from the living culture and finally would remain only in the realm of linguistic archaeology like in the etymological connections we saw. As Virgin Mary, the mother of incarnated Christian deity, the divine feminine was placed below the father god and his only son in the Catholic hierarchy. From being the origin of all existence, she has been reduced to a biological vessel for the incarnation of the male deity and rewarded with sainthood for her obedience to a sky god.

The divine feminine as ‘the Mother’ would resurface again in the West, in the field of Jungian psychology. Carl Jung wrote elaborately about the ‘Mother’ archetype. Archetype for Jung is a nebulous form in the collective unconscious. When surfacing to the conscious it would attain certain modifications and then manifest. He placed Mother as the first of the four major archetypes of humanity.

Jung sees ‘the paradoxical Kali’ as the ‘loving and terrible mother’ in Indian context. But he considers Prakrithi – the primordial matter in the Sankhya system as anima – the collective woman archetype in the male psyche, rather than as the Mother. He concludes that in the Mother archetype ‘the opposites remain united in one figure’. This he attributed to the ‘primitive mind’ remaining undisturbed by such a unity and also to 'predominantly intuitive intellectual attitude' of the Eastern mind leaving 'no room for feeling values'.

Jung also discusses the creed of ‘Assumption of Mary’, then announced by the Catholic Church. He considered it a counter-measure of the Church to the 'rationalistic and materialistic view' brought by science to the Western society, which in turn had 'threatened the spiritual and psychic heritage of man with instant annihilation'. Yet, for Jung, the creed of Assumption of Mary is inadequate because it does ‘nothing to diminish the tension between the opposites, but drives it to the extremes'.

It is here that we find Sri Mata as harmonising the perceived opposites of matter and spirit. This is not through ‘primitive’ or so-called Asiatic indifference to values, as understood through the colonial lens of Jung, but through the fundamental realisation of the creative act of Maya bringing into existence the phenomenal world. And who is this Mother who harmonises the seemingly contradictory polar opposites in nature?

Eleven years before Jung came up with his first lecture on ‘Mother’ archetype, Sri Aurobindo wrote six chapters on the ‘Mother’ (1927). He described her as the vast ‘Conscious Force’ that animates all existence.

The One whom we adore as the Mother is the divine Conscious Force that dominates all existence, one and yet so many-sided, that to follow her movement is impossible even for the quickest mind and for the freest and most vast intelligence. The Mother is the consciousness and force of the Supreme and far above all she creates.

Traditional commentators say that her very first name also contains the name of Shiva. In this interpretation another meaning of Sri as poison is combined with the term ma which means ‘to fix’. Thus taken, the name assumes a form which signifies the oneness of Shiva and Shakti as Ardhanareeswara. If so seen, then the penultimate name ‘Shiva-Shakti-aikya Rupini’ (999) completes the cycle.