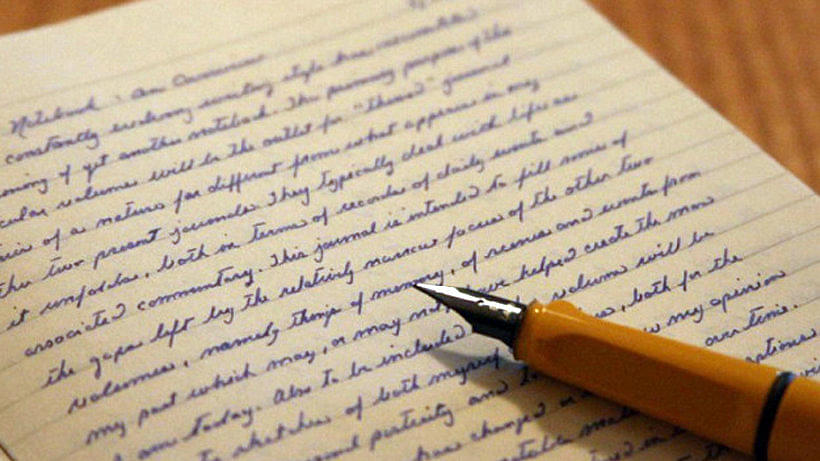 The joys of letters (Wikimedia Commons)

With letter writing a nearly forgotten medium now (where everything gets home-delivered, except handwritten letters!), a good place to rediscover the joy of letters is in a literary genre that has long held a fascination for me: epistolary books – that is, fiction and non-fiction showcasing correspondence between two people.

Dracula is one famous example of the epistolary novel – a story told through letters – while 84 Charing Cross Road is perhaps everyone’s favourite book of actual, real life letters. For me, personally, what engages me more is the latter: real letters exchanged between people.

A new book that looks at a wide range of letters exchanged between people is Letters of Note, compiled by Shaun Usher. It has become an instant classic on publication. Its two volumes have garnered much praise not only for the eclectic selection of letters but also for how they are presented in the book: replicating actual facsimiles of the letters. Along with this book, and Maria Popova’s widely read blog, ‘Brainpickings’, which often looks at letter writing, my interest in this genre has once again been rekindled. I’ve taken to reading one or two letters each night before I turn in for the day. The letters in Letters of Note range from “Virginia Woolf's heart-breaking suicide letter, to Queen Elizabeth II’s recipe for drop scones sent to President Eisenhower; from the first recorded use of the expression 'OMG' in a letter to Winston Churchill, to Gandhi's appeal for calm to Hitler; and from Iggy Pop's beautiful letter of advice to a troubled young fan, to Leonardo da Vinci's remarkable job application letter.”

Another current favourite of mine in the genre is Highway Dharma Letters, a tale of correspondence between a contemporary Buddhist teacher and his two disciples. Highway Dharma Letters: Two Buddhist Pilgrims Write To Their Teacher is the story of American Buddhist monks Reverend Heng Sure and Reverend Heng Chao, who undertook the ancient ascetic practice of bowing once every three steps on a two-and-a-half year pilgrimage up the coast of California. They took with them only their faith and a wish for world peace as they inched their way along at about a mile and a half a day.

Who gave them food? Where did they sleep? How did they diffuse the anger of drunks along the way, and overcome the hostility of law enforcement? What lessons did they learn in compassion and humility? And most importantly, what can we learn from their journey? Highway Dharma Letters is what the monks wrote every day to their master Hsung Hua. The message in the letters is timeless. I have been fortunate to know Reverend Heng Sure. Not long ago, I took a little trip to meet and talk to him about his book. He expressed surprise that people were still interested in their journey that was undertaken in 1977! And what’s more, that they were still buying the book. “I'm still amazed that people care to read these letters. The pilgrimage happened three decades ago and Marty (Reverend Heng Chao) has a white beard!”

On a recent visit to the Kennedy Library and Museum in Boston, I bought Letters to Jackie by Ellen Fitzpatrick. Within seven weeks of president John F Kennedy’s death, Jacqueline Kennedy received more than 800,000 condolence letters. Two years later, the volume of correspondence would exceed 1.5 million letters. For the next 46 years, the letters would remain essentially untouched. Until historian Ellen Fitzpatrick selected approximately 250 of these letters for inclusion in Letters to Jackie, a remarkable human record that perfectly preserves the heart-wrenching grief and soul-searching of a nation in a time of crisis. My heart sank and my eyes teared up often as I read through these letters that seemed to contain the extraordinary eloquence of ordinary Americans across generations, regions, race, political leanings and religion, expressing their anguish over losing their favourite president.

Apart from Dracula, there have been other famous novels written as letters; a good contemporary example is Alice Walker’s The Colour Purple. Why, even Arvind Adiga’s Booker prize-winning book The White Tiger is epistolary! The bestselling thriller by Elizabeth Kostova, The Historian, is made up of letters. And then there’s the old favourite, Helene Hanff’s 84 Charing Cross Road, about letters between a book lover and a bookseller. The book was adapted into a play, and then a movie, but it is the book that remains a classic.

The charm of this kind of a book made of an exchange of letters is the immediacy and intimacy it creates in the narrative. Each letter in 84 brings out the personality of the letter writer and the style of their writing. The contrast between the letters is what makes it so entertaining and engaging, even moving. And perhaps, best of all, the brevity of what is said. A flurry of short exchanges that makes you race through the book, and with each letter you get more involved in the lives of Hanff and the staff at the bookshop. An expectation is now set up: when a letter comes from the book lover, how will the bookshop respond? Because, while the staff write formal, affectionate letters, Helene writes very impishly and brazenly – and the fun is in how each staff member of the bookshop reacts to her wit and teasing. Finally, as the letters come to an end, there is nostalgia and tears, of both sadness and joy.

However, my all-time favourite book of letters, one that been central to nourishing my soul, is The Mahatma And The Poet, which are letters between Gandhi and Tagore. These are private letters written between 1915 and 1941 that are of great historical interest. They are currently preserved in the archives of Visva-Bharati, the university founded by Tagore. The book gives us deep insights into the relationship between these two giants. While both had major differences in opinion on numerous topics, the letters indicate the deep respect, admiration and love for each other.

In 1934, after Gandhi made a public statement calling the Bihar earthquake divine retribution for India’s sins, an appalled Tagore wrote respectfully but assertively, “I feel compelled to utter a truism in asserting that physical catastrophes have their inevitable and exclusive origin in certain combination of physical facts. … We, who are immensely grateful to Mahatmaji for inducing, by his wonder working inspiration, freedom from fear and feebleness in the minds of his countrymen, feel profoundly hurt when any words from his mouth may emphasize the elements of unreason in those very minds – unreason, which is a fundamental source of all the blind powers that drive us against freedom and self-respect.”

These letters offer a poignant example of what it means to be both friends and intellectual adversaries, to stand by one’s convictions with equal parts dignity and respect for the other, to seek above all else the advancement of the public good rather than stroking of the private ego. In the digital world, would we ever have the equivalent of Letters from a Father to His Daughter by Jawaharlal Nehru or The Letters of Ernest Hemingway or Graham Green: A Life in Letters – without letters themselves? Will the answer be books on emails or Twitter exchanges?