Remaking The World, Riding On The Coat-Tails Of An Unseen Agent – Part 2 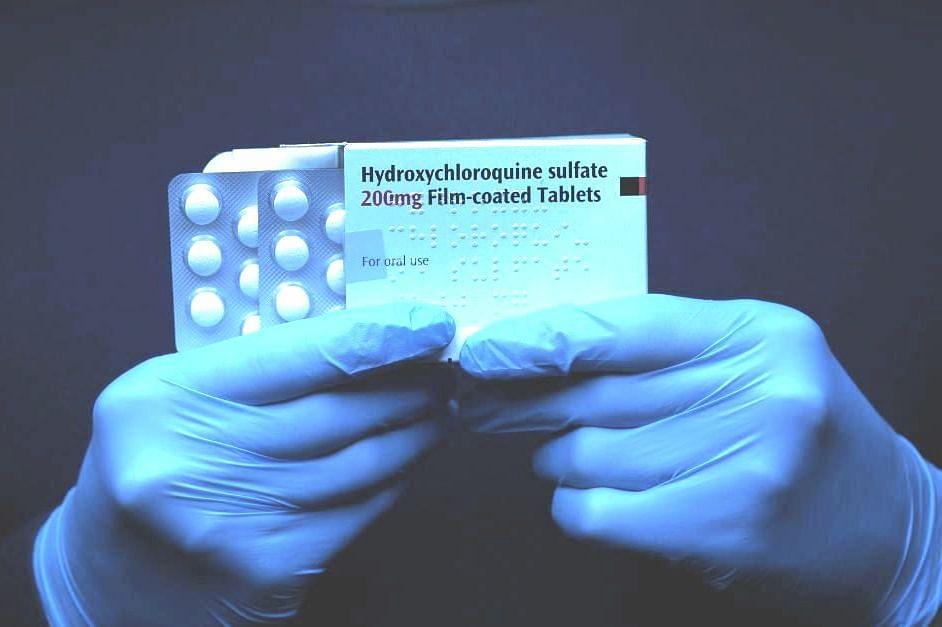 On 24 May, Swarajya published Part 1 with the same title. There is a little story behind it. My first draft had a page and half on the efficacy of hydroxychloroquine. I shared it with some knowledgeable friends for them to ‘approve’ the portions concerning hydroxychloroquine before I sent it off to the magazine editors. They guided me to this study published in the Lancet on 22 May.

It was devastating. So, I removed the portions that dealt with the positive impact the inexpensive hydroxychloroquine had on Covid-19 patients.

What follows below is the material on hydroxychloroquine that I removed before sending the article to Swarajya for publication.

Virology Journal is published by BioMed Central which is part of the publishing house, The Springer Nature. PubMed Central (PMC) is a free full-text archive of biomedical and life sciences journal literature at the US National Institutes of Health's National Library of Medicine (NIH/NLM).

PMC archive features an article published in August 2005, titled, ‘Chloroquine is a potent inhibitor of SARS coronavirus infection and spread’.

There were eight authors to the study and they belonged to Special Pathogens Branch, Division of Viral and Rickettsial Diseases, Centres for Disease Control and Prevention in America and the Laboratory of Biochemical Neuroendocrinology, Clinical Research Institute of Montreal in Canada.

Dr Larry Brilliant says, “studies of the genome show it is 95% identical to the original SARS virus, which caused a global scare in 2003.”

Given the incredible potential of chloroquine, noticed and documented as early as in August 2005, and its immense affordability, one would have expected many scientists to take up the matter from where these researchers had left it.

It is encouraging to note that the University of Oxford has commenced a study to administer chloroquine, hydroxychloroquine or a placebo to more than 40,000 healthcare workers from Europe, Africa, Asia and South America.

Prof Martin Llewelyn who is leading the study said that a widely available, safe and effective vaccine might be a long way off but if drugs as well-tolerated as chloroquine and hydroxychloroquine could reduce the chances of catching Covid-19, this would be incredibly valuable. Exactly. Given the highly favourable benefit-cost trade-off with chloroquine, that is an extremely constructive response.

What we get in mainstream discourse is, however, rather different. We encounter several attempts not only by scientists but also by mainstream media outlets to lampoon, to ostracise the medicine, the scientists who attest to its efficacy and doctors who report good results from using hydroxychloroquine.

There are dog whistles, innuendoes and character assassinations. One site that is self-styled as ‘for better science’ calls the respected French virologist Didier Raoult who reported successful outcomes with hydroxychloroquine, a “witchdoctor, barking mad and dangerous”. That indeed advances the cause of science!

In Cameroon, however, Didier Raoult is a ‘national hero’, according to France 24 (‘Covid-19: In Cameroon, chloroquine therapy hailed by French expert becomes state protocol’, 3 May 2020). Incidentally, Cameroon’s death rate is six per million population according to Worldometers.info. Its total population is 26.4 million.

In Spain, a bunch of doctors/researchers enrolled 18-85 years old inpatients from Central Defence Hospital “Gómez Ulla”, Madrid, who were hospitalised for Covid-19 and had a definitive outcome (dead or discharged). They concluded that, for their cohort, hydroxychloroquine treatment with 800mg added loading dose increased survival when patients were admitted in early stages of the disease.

There was a non-statistically significant trend towards survival in all groups. This was not peer-reviewed and published research.

However, we should remember that the model used by the Imperial College to predict millions of deaths from the virus was also a pre-publication version that had not been peer reviewed.

Bahrain is a country that has done well with the containment of the spread of the Covid-19 virus. The country has a population of 1.7 million. It has recorded 12 deaths till date (21 May 2020) and hence, seven deaths per million.

The Bahrain News Agency affirmed that the President of the Supreme Council of Health (SCH) Lt Gen Dr Shaikh Mohammed bin Abdullah Al Khalifa, the Head of the National Taskforce to Combat Covid-19, had affirmed that the therapeutic protocol of the Kingdom of Bahrain which uses hydroxychloroquine (HCQ) medication in treating Covid-19-infected cases had proved its effectiveness.

He said the kingdom is one of the first countries that used the medication, pointing out its success in alleviating the symptoms of the virus and reducing its complications.

The SCH president noted that Bahrain used hydroxychloroquine on 26 February 2020 after detecting the first Covid-19 case two days before. He pointed out that the National Taskforce to Combat Covid-19 decided to use the medication to treat the cases according to the experience of the countries which achieved a remarkable success in curing the coronavirus-infected cases, like China and South Korea, where the recovery indices rose remarkably.

None of this matters if the agenda is not to allow restoration of normalcy as early as possible but to delay it as far as possible. That is why the only treatment that shows promise and that is affordable has to be discredited.

According to the New York Times, the American doctor who treated his patients in a county in New York is touting his results. According to Washington Post, Justice Department scrutinises White House-connected doctor linked to disputed coronavirus treatment. That is a lesson in the number of innuendoes one could pack into a single sentence.

President Trump said he was taking HCQ (hydroxychloroquine). He was lampooned and so was the medicine. Now, fast forward nearly two weeks later, the story that has unfolded is incredible.

Look at the developments:

(1) "More than 100 scientists and clinicians have sent an open letter to The Lancet's editor, Richard Horton, and the paper's authors asking them many uncomfortable questions, but have failed to receive convincing answers from the authors. How can a drug like hydroxychloroquine produced in such huge quantities for a country as populous as India, safely consumed by millions and millions of chronic users for so many decades without any adverse effects, suddenly get a negative report in 2020 when it's most needed for a pandemic such as Covid-19?" (Source)

(2) "Meanwhile, Professor Harvey Risch, MD, Epidemiologist from Yale University has recommended an early therapy with Hydroxychloroquine & Azithromycin in the early therapy for Covid-19. His study ‘Early Outpatient Treatment of Symptomatic, High-Risk Covid-19 Patients that Should be Ramped-Up Immediately as Key to the Pandemic Crisis’ has been published by Oxford University Press, on behalf of the Johns Hopkins Bloomberg School of Public Health." (Source)

(3) These are the news stories concerning the study that the Lancet published.

(4) Read the story in The Guardian and the guy behind the company 'Surgisphere' is one Dr Sapan Desai and one of his employees is a sci-fi writer and another is (believe it) an 'adult content model'.

"Late on Tuesday, after being approached by the Guardian, the Lancet released an “expression of concern” about its published study. The New England Journal of Medicine has also issued a similar notice."

In an editorial published on 3 June, the Wall Street Journal observed, “Lancet editors last month published an editorial urging Americans to vote out President Trump, so it’s fair to ask if political bias clouded their scientific judgment and caused their publication standards to slip.

The World Health Organization’s knee-jerk reaction to the study has also further undermined its scientific authority, though on Wednesday it said it is restarting its HCL trial. HCL should rise or fall as a treatment on its medical merits, not whether people think it vindicates or repudiates Donald J. Trump. And keep the politics out of medicine.”

(5) Brazil's (now former) health minister – second one in two months – made a big show of resigning in protest because Bolsonaro insisted on HCQ. The minister was an oncologist by name Nelson Teich and he resigned within a month of being appointed. One of the causes of his resignation was the reported insistence of the ‘Far-Right’ (yes, all those who are not aligned with the preferences of self-appointed elites and experts are ‘Far-Right’) President of Brazil on using chloroquine.

"The final straw for Teich was reportedly a disagreement with Bolsonaro over using chloroquine to treat the virus. Like US President Donald Trump, to whom he is often compared, Bolsonaro touts the drug as a promising treatment. He wants it cleared for widespread use in patients, despite studies casting doubt on its effectiveness and raising concerns about its safety." (Source)

Professor Harvey Risch had the right attitude about the inexpensive medicine:

Some people will have contraindications and will need other agents for treatment or to remain in isolation. But for the great majority, I conclude that HCQ+AZ and HCQ+doxycycline, preferably with zinc can be this outpatient treatment, at least until we find or add something better, whether that could be Remdesivir or something else. It is our obligation not to stand by, just ‘carefully watching’, as the old and infirm and inner city of us are killed by this disease and our economy is destroyed by it and we have nothing to offer except high-mortality hospital treatment.

We have a solution, imperfect, to attempt to deal with the disease. We have to let physicians employing good clinical judgement use it and informed patients choose it.

There is a small chance that it may not work. But the urgency demands that we at least start to take that risk and evaluate what happens, and if our situation does not improve we can stop it …

… but we will know that we did everything that we could instead of sitting by and letting hundreds of thousands die because we did not have the courage to act according to our rational calculations.

I am shocked, depressed and speechless at how inhuman some of us, humans, have become.

(Postscript: The authors of the study published in the Lancet on 22 May 2020 (and earlier in May in the New England Journal of Medicine) that claimed that hydroxychloroquine carried safety risks and no benefit that have retracted their paper)