Rethinking ‘Cownomics’: A Smaller Herd Can Be Protected Better 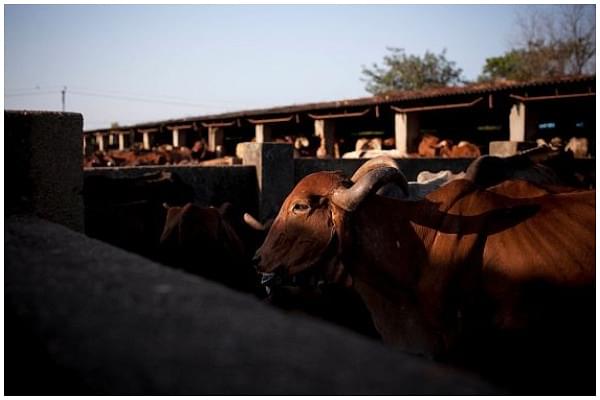 Cow-related violence, both the ones perpetrated by its protectors and its illegal transport mafia, calls for a strategic rethink by Hindus. It is not about questioning the sacredness of the cow or ending the ban on its slaughter, but about how we should go about making this ban work.

Unlike the Lutyens media mafia, which would like to irritate Hindus by holding beef festivals and pretending that the slaughter ban amounts to a denial of the right to eat what one wants, more thoughtful commentators acknowledge that in many countries totemic animals cannot be killed. The animals held sacred may vary from country to country, culture to culture, but what is sacred cannot be killed.

Sociologist Dipankar Gupta wrote as much in a Times of India article in 2017. Holding an animal sacred is not a Hindu obsession. Wrote Gupta: “Egyptians believed the cat was sacred; the Zoroastrians, like the Hindus, revere the ox as their prophet was, in lore, saved by one; the Cherokee Native Americans give the eagle a special place and nobody is allowed to mess with it. The gentle turtle is also an object of worship among many peoples, ancient and modern.”

Nor, Gupta assures us, is the ban on cow slaughter an imposition on those who don’t think it is sacred. “When a law prohibits the consumption, or slaughter, of a certain animal, then it applies to every citizen, without exception. In Germany, Britain, Ireland, France, South Australia, among several other countries, dog meat is banned. In six states in America you cannot flip dog flesh on your hamburger grill.”

Clearly, the freedom to eat argument is just secular nonsense intended to paint Hindus as some kind of weirdos. What, however, one must think about is how the slaughter ban is to be implemented and made effective.

Let’s start with basics. That which is too common or in plentiful supply cannot be made sacred by law. It is scarcity that works. If there are too many cows around, it automatically becomes less sacred. The sheer size of the herd makes it impossible to protect it or prevent its illegal slaughter.

As a corollary, one must acknowledge that the market will find a solution by seeking ways to balance supply with demand. When cows are in plentiful supply, their value will fall and slaughter will seem to be the only option. This will happen illegally, if it is not possible legally. This is the essential source of conflict between cow smugglers and gau rakshaks. Some 24 states have banned cow slaughter, but none of them has a policy in place – beyond setting up the odd gaushala – to enforce the law. Little wonder, the law is enforced by private protection racketeers.

This leads us to the obvious solution: to really protect the cow, we must reduce the herd over time. In their own intuitive way, Indian dairy farmers have started switching to buffaloes, since cows have become a problem to maintain after their useful life is over. The state must encourage this trend.

On the other hand, many Indian cow breeds are vanishing, as dairy farmers either do not find them remunerative, or have found other alternatives to securing a livelihood. Crossbreeds are now the rage, as farmers find it less worthwhile to invest in pure Indian breeds, of which there are 26 well-defined varieties. The rest, local varieties, constitute nearly 85 per cent of the total herd. If well-defined Indian breeds vanish one by one, the environment is the loser, as biodiversity reduces.

So, what is the way forward for the holy cow?

The Indian state must devise a strategy that involves the following.

One, it must incentivise the protection of multiple breeds, but in each case the numbers should not be allowed to grow beyond a certain minimum.

Two, there must be active incentivisation to reduce overall cow herds of non-descript varieties, till stable and sustainable levels of cattle populations are reached. States which ban slaughter must provide for maintaining a census and any expansion of the herd must need state sanction.

Sad though it seems, a licence-permit raj in cows may be necessary for its protection, though this needs supervision not just by the bureaucracy, but by joint public-private partnerships. Licensing gau rakshaks to turn legitimate protectors and enforcers is better than allowing them to earn illegal protection money from the cattle mafia.

Three, as the cow herds reduce in size, farmers will benefit from rising prices of cow milk, and these higher earnings must be used to provide for the upkeep of the cow once its useful life is over. This is how we take care of senior citizens, whose earnings during their work years enable pensions and medical care after retirement. The logic that applies to human society must equally apply to cattle and cows if you want to ban slaughter. Just as we tend to have fewer children in order to give them a better life, we need fewer cows to give them the veneration and protection they deserve.

Four, once herd sizes fall, their value goes up, and smugglers will find it harder to buy them for slaughter. A more valuable cow will be better protected and shielded from its executioners. Value comes from reducing supplies against potential demand. That which is cheap and plentiful cannot be protected.