Reverse Migration Of Labour Is A Recipe For Health And Economic Disaster; The Indian State’s Inability To Communicate Clearly Is To Blame 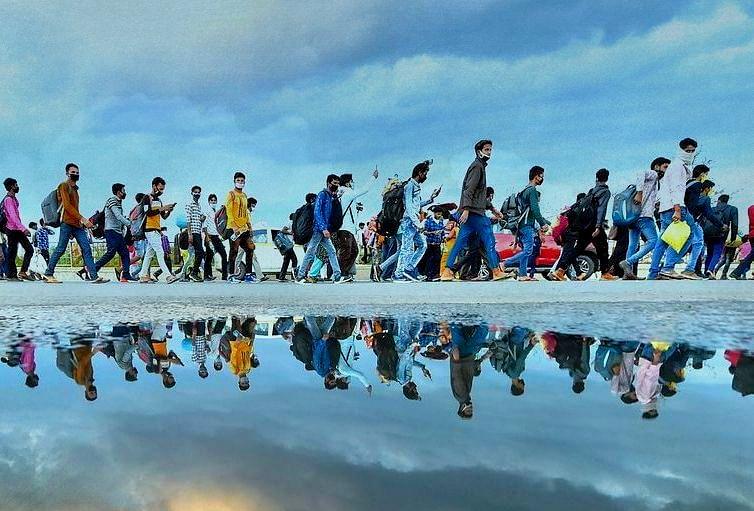 Migrant workers walk to their native villages after the announcement of 21-day nationwide lockdown.

As the Centre announced trains for migrant labour to move back to their home states, thousands were seen rushing to railway stations.

At a display of some strange sense of farewell, amidst chants of Bharat Mata ki Jai, many workers were seen bidding ‘goodbye’ to the officials flagging off the trains.

The optics aside, the scale of reverse migration as revealed now, or when thousands were said to have gathered at the Bandra station in Mumbai or at the Delhi UP border earlier, reveals a larger issue at hand, and an extremely complicated one at that.

56.3 million is the number of inter-state migrants, according to the 2011 census, while latest estimates pin it at 100 million across the country.

Mass return of internal migrants in the country is now being facilitated temporarily, but do the states have the necessary economic infrastructure to accommodate these returnees?

Karnataka CM B S Yediyurappa requested the migrant labour to stay back as industrial and commercial establishments and activities like real estate and construction were being restarted in the state.

Odisha CM Naveen Patnaik on the other hand, demanded, at a meeting of Chief Ministers with the Prime Minister, a standard operating procedure for the entire country for movement of stranded migrant workers, students, pilgrims and others.

And this led to the facilitation of the current ‘Shramik special’ trains and such other facilities that are now being made available.

Around 1.2 lakh workers were reportedly stranded in various states, according to the Odisha government.

But this ‘response’ to facilitating the return of those “stranded” could have been more thought out.

Students, workers, pilgrims and others could be said to be stranded. But are labour “stranded”?

Weren’t they at the host states to earn their living in the first place, owing to lack of options in their home states?

If they now claim to be ‘stranded’, though most states have been providing for the migrant labour and assuring resumption in activities, what means of earning are available for them at their home states?

On arrival, the passengers are supposed to be received by the state government authorities, which will also be making facilities for their travel from the railway stations to quarantine.

But do these states have the mechanisms and means to provide for the all-so-sudden influx of people thanks to this unchecked reverse migration?

In addition, the migrants are required to ‘register’ their vehicles on the official Covid portals but the loopholes and the effects have already begun to trickle in.

Workers have begun to migrate in trucks and vans, leaving locals and officials at border check-points frenzied.

Like this instance, where workers were moving from Surat to Odisha, over a 100 of them had to be sent to institutional quarantine after being stopped at the check-post on discovering that they did not have the required permit.

Similarly. in Kalahandi, as reported, the ‘sudden arrival’ of plantation workers from Khamam in Telangana is said to have caught the officials off guard, as the trucks filled with around 120 migrant workers reached the district borders.

Expecting the labour class to be going digital and filing for permits for vehicles or registering themselves on state government portals on their own, and host states permitting them to return in trucks, with recipient states clueless, is just the perfect recipe for a contact tracing nightmare and community transmission, if another wave of the virus were to break out.

Since most migrants are not temporary (many of them are semi-urban to urban movers, or plantation workers in case of rural-rural migration), could the reverse migration have been avoided?

Could bilateral activities and measures to provide basic essentials and health facilities for these cash strapped, unemployed migrant labour in all parts of the country be put in place to ensure they did not have to resort to ‘going home’?

The states to and from which these are labourers are moving have all been in red/ orange zones and hence, not quarantining them will surely bring in the second wave of the virus, given that most of them will now be home with their elderly, whose immunity to the virus is most likely much lower.

Mobs, migrant distress, and those countless episodes of labourers walking back hundreds of kilometres is all happening, among other reasons, owing to a failure of communication.

Clear, concise communication with regard to the facilities that will be provided — be it medical or otherwise — is lacking.

Forty million is the number of internal migrants in India who have been rendered economically distraught by this pandemic, according to the World Bank.

Given that the top five out-migration states are also those whose unemployment ratio has only been rising in the last year, this temporary influx of labour will only add to their woes.

The reverse migration highlights the highly uneven distribution of the labour force on one hand, and the lack of infrastructure — both physical and social — in the states where these movements have taken place.

And the Corona crisis should serve as the best opportunity to fix both.

Incentivising both Indian and international investment in these states where labour is available in abundance, trimming the red tape and amending archaic laws that have only strangled development like the land acquisition laws, and facilitating manufacturing activity to absorb this labour in tier-two and tier-three cities and semi urban landscapes should be now looked at with pressing urgency.

Both, for home states of these migrants as well as the recipient states.

Else, this flight of migrants will surely puncture the process of economic revival post lockdown.