Sabarimala Conflict: Who Exactly Is A Naishtika Brahmachari? 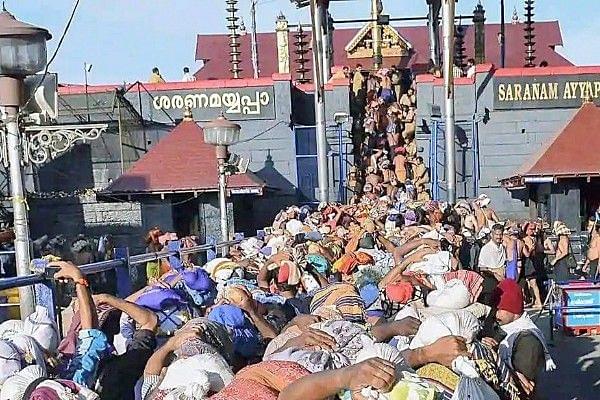 In a shocking development, the Travancore Devaswom Board, which manages the operations of the Sabarimala temple, has reversed its earlier stand with respect to the entry of women in the age group of 10-50 into the temple. In a baffling U-turn, the board has now decided to respect the decision of the Supreme Court and allow women in the age group of 10-50 years to enter the temple premises. This U-turn came when a five-judge constitutional bench of the Supreme Court was hearing pleas seeking a review of its earlier verdict.

One of the main points of arguments from the side of the defendants (those who want the practice to stay) has been that the deity, Swamy Ayyappa,  is in the form of a  ‘naishtika brahmachari’. In this form, it is being argued that the deity does not come into contact, in any way, even visual, with women aged between 10 and 50 years.

Since the temple is dedicated to worshipping Ayyappa in this form, any deviation from the required modes of worship will constitute an infringement of the fundamental identity of the religious denomination. The question that is being asked by the Supreme Court bench is: “Is the requirement a fundamental religious practice?”

The defendants have produced evidence from the temple agama shastras to prove their contention. It would, no doubt, benefit the arguments if further evidence from our shastras is produced to show that the requirement is based on sound religious requirements and that it is not a result of any misogynist mindset of the management.

Brahmacharya And Its Types

Quite a few of our smriti granthas (which are without a trace of doubt fundamental scriptures of the Hindu religion) touch upon this topic of brahmacharya. Manu Smriti, Vasishta Smriti, Jabali Smriti and Smriti Chandrika are some of the granthas that shed light on brahmacharya.

But two granthas  —  Smriti Muktavali by Sri Krishnacharya,  and Yajnavalkya Smriti,  give compelling details relevant to the current debate.

Smriti Muktavali explains the two types of brahmacharya as follows.

There exists two variations in brahmacharya : upakurvaana and naishtika. An upakurvana brahmachari is one who practises celibacy until he completes his education (vedadhyayana) after which he ends his celibacy, marries as per shastra, and leads the life of a gruhastha.

On the other hand, a naishtika brahmachari is one who undertakes a vow to remain a celibate till his death. He also has to undertake to live forever with his guru!

In addition to this, there are two primary requirements of such a naishtika brahmacharya which is featured in Yajnavalkya Smriti:

In this way (a naishtika brahmachari should) body should be subject to stress and an extreme control of the sense should be practised. Such a person shall attain brahmaloka and will not be born again!

So, two main requirements of a naishtika brahmachari are:

2) Extreme indriya nigraha or control of the sense.

Vasishta Smriti has a long list of requirements in terms of physical hardship that a naishtika brahmachari should undertake. A few examples are as follows:

Note: One may recall that the Ayyappa idol at Sabarimala is in a seated position  that is conducive to studies and reflects the dictum given above.

Thus, there are extreme requirements imposed from the point of view of physical hardship.

Extreme Control Of The Sense

Like we have seen above, Yajnavalkya Smriti says: “vijitendriyah” as the requirement from the point of view of sense control.

In this ‘mitakshara’ commentary on the above shloka, Sri Vijnaneshwara explains it as below:

The sensory organs that need to be controlled are eyes, ears, mouth (and tongue), nose, skin, hands, legs, reproductive organ, excretory organ and mind. Now it is well known that control of the sense involves control of actual performance of activities by the sense organs as also avoiding any thoughts that could corrupt the mind.

Since a naishtika brahmachari has been explicitly ordered to undertake extreme measures, in order to avoid the deviation of his mind towards procreation as also to keep the reproductive organs under control — he is required to completely stay away from women of procreative age.

Diety As A Human

It is a well-known, and well-accepted, fact that as per agama shastra, the deity in a temple is subjected to the same conditions that an ideal human in that particular form would undertake. Hence, whenever a male deity is worshipped as a naishtika brahmachari, the specific agamas of the temple — based on the injunction in Yajnavalkya Smriti — impose the condition that he not be subjected to the company of women aged 10 to 50  —  IN ANY WAY.

Hence their entry to the abode of worship is forbidden and only if they are on either side of the age limit are they allowed.

We can thus see that the temple agamas are clearly derived from one of the main smriti granthas — the Yajnavalkya Smriti to be precise. Smritis, along with the shrutis (vedas) form the core of Hindu religious scriptures.

Hence, this injunction is an absolutely essential requirement for the worship of a deity in naishtika brahmachari form.

This piece was originally published on the author’s blog and has been republished here with permission.