Sabarimala: Why Judiciary Stepping Back Is The Most Organic Solution To The Current Crisis 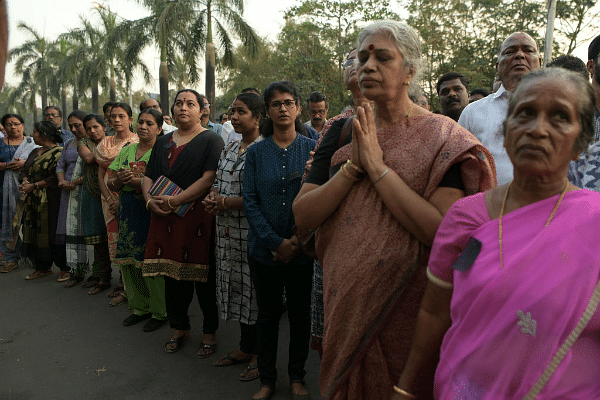 After claiming a hollow victory over the faith of millions of Ayyappa devotees across the country by secretly facilitating two women in their forties to enter Sabarimala, the Communist government in Kerala is now facing a law and order situation the state.

The hartal (strike) called by the Sabarimala Karma Samiti (SKS) on 3 January ended in a law and order crisis, with Chandran Unnithan, a member of the SKS, succumbing to injuries in stone-pelting during the protests.

Other than the police, protestors at various places, especially Pathanamthitta, had to face the wrath of the Communist Party of India (Marxist) or CPI(M) cadre. The latter disrupted the protests by pelting stones at the members of the Bharatiya Janata Party (BJP) and SKS. State-run buses were vandalised, and many got injured in a face-off between the protestors and the police.

However, much of the blame falls on the Communist government in Kerala, which is hell-bent on implementing the Supreme Court verdict, facilitating the entry of the two women when the apex court is yet to hear the review petitions on 22 January.

The events since the 28 September verdict have made it clear that any negotiation with the Chief Minister of Kerala is not possible. With his comments supporting the women who entered the temple and asking the thantri (head priest) to step down after the closure of the nada (sanctum door) for shuddhi kalasam, there is little hope that Pinarayi Vijayan would heed the devotees’ prayers.

However, recent events have agitated thousands of otherwise peacefully protesting Ayyappa devotees. The state saw the resurgence of the otherwise-silent majority of Hindus, with all opposition parties including the Congress joining the protests against the government. The pelting of stones by the CPI(M) on the protestors, including women, exemplifies how desperate the party is in suppressing the protests.

As it stands, the hearing of the review petitions by the Supreme Court headed by Chief Justice Ranjan Gogoi on 22 January assumes much significance.

The Supreme Court, as an interpreter of the Constitution and the highest judicial body in the country, should be revered. A breach of its ruling is not healthy for democracy, but neither is putting the beliefs of millions of devotees under jeopardy in the name of implementing its decisions.

This confrontation between the majority faith and the apex court must end. But how?

Legislative intervention? If the confrontation between Hindus and the judiciary gets too antagonistic, then the legislature and the political leadership must step in. But this would be an artificial solution because it does nothing to solve the problem from the side of the judiciary.

The most organic and natural solution, therefore, would be if the judiciary itself heeds the words of Justice Indu Malhotra and steps back from interfering in religious institutions and practices as one sees in Sabarimala.

Justice Malhotra had said in her dissenting judgement: “Permitting PILs in religious matters would open the floodgates to interlopers to question religious beliefs and practises, even if the petitioner is not a believer of a particular religion or a worshipper of a particular shrine. The perils are even graver for religious minorities if such petitions are entertained.”

The current crisis only underlines the dangers of such pronouncements of the apex court and of ruthlessly implementing them. It is in the greater interest of the democracy if the judiciary refrains from commenting on such religious practices.

Judicial review of religious practices ought not to be undertaken, as the Court cannot impose its morality or rationality concerning the form of worship of a deity. Doing so would negate the freedom to practise one’s religion according to one’s faith and beliefs. It would amount to rationalising religion, faith and beliefs, which is outside the ken of Courts.

Let this be the guiding wisdom when the Supreme Court hears the review petitions on 22 January 2019.