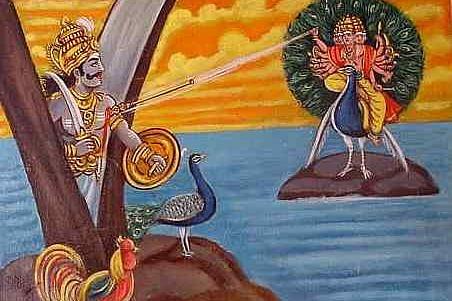 Skanda splitting the tree into two halves with his divine spear.

This puranic event differs from most other puranic slayings of asuras in the sense – here the asura is not killed. Instead he is transformed into a peacock that becomes the vehicle of Skanda, with the rooster becoming a part of his flag.

Skanda Purana was written in Tamil as Kantha Puranam by Kachiappa Sivacharyar. He lived in Kanchi. Scholars still debate the period in which he lived. Mostly, it should be around the eleventh century. According to tradition, Kantha Puranam written by him was vetted by none other than Skanda himself, everyday.

Sooran and his two brothers, Tarakasura and Simhamukasura, were born to Maya and Maharishi Kashyapa. These sons were instructed in penance and austerity by their father, and ambition and revenge by their mother. The three asuras did severe penances towards Shiva and received many boons including invincibility, which means no one except Shiva can defeat them.

With these boons they started tyrannising the three worlds. All devas were held in captivity.

Devas approached Shiva who was immersed in deep meditation and tried in vain to get Shiva married to Parvati using Kama. After burning Kama, Shiva married Parvati, and Kumara was born. He is Skanda-Muruga. After many remarkable events which reveal the oneness of Shiva and Muruga, the lord decided to remove the sufferings of the devas and fought the asuras with his divine troops.

Tarakasura was known for his powers of delusion. Muruga smashed the Krauncha hill, that created the illusions and deluded the divine warriors, and killed Taraka.

Simhamukasura much like Kumbhakarna in Ramayana revealed to Soora Padma the real nature of divine child Muruga, who is identical with Shiva himself. But Soora would not listen and Simhamukasura went ahead and fought and was killed by Muruga.

The last was Soora Padma. As the fight progressed, Muruga revealed his cosmic form to Soora Padma. The mighty asura realises that the one in the form of a child is the divine principle which is the cause of all existence. The child is Shiva himself.

The child seated in the beautiful peacock was,
I assumed, just a kid, never realising His real nature;
For Vishnu and Brahma and all other Devas Divine
This God before me is the Primal Causative God!

But when Muruga resumes the warrior form the asura assumes that his opponent is just a kid whom he could win.

As the war progresses the asura takes the form of a huge tree. The divine spear of Muruga splits the tree into two halves. One becomes the peacock and the other a rooster. Both the birds ferociously charge at Muruga. But the divine gaze of the beautiful child Shiva-Muruga removes all vestiges of negativity that both become the servants of the lord.

Here the maya when combined with penance gives raise to three asuric persona – each symbolising the three inner impurities described in Saiva Siddhanta as ego (aanavam), karma (kanmam) and maya. According to Siddhanta, all souls have these three impurities of which the ego is the primal one. Soora Padma symbolises this. Simhamukasura symbolises karma and Tarakasura symbolises maya.

Of the three, it is the aanavam or ego which usually resides in the soul in its journey towards liberation. Skanda arrives and engages the soul in a fight because of his great compassion. He also gives a vision – fleeting glimpses of his real form.

At the same time, he hides truth through his power of concealment – one of the five fundamental functional archetypes of the divine. The concealment helps the soul merge with the world taking the visible reality as the only reality.

When all the impurities are removed by the spear, which symbolises divine wisdom, ego still remains. Ego is not destroyed but is transformed. It is interesting that the two birds – one with beautiful feathers and the other known for its shrill call – the beauty and fury – show how ego can subtly resist the divine till the end.

It should be understood that it is the divine gaze of the lord that at last subdues and transforms the ego. Though the qualities of beauty and ferocious sound remain, they are no more asuric but have become instruments of the divine.

They are so closely associated with the divine that they are worshiped by every devotee of Muruga. Ego never becomes the lord. But it becomes a tool and a servant of the divine consciousness.

This is Siva-Advaita or Sutha-Advaita of Saiva Siddhanta. It removes the pitfall of falsely, arrogantly and even abusively identifying the ego or even deeper aspects of ego with divine consciousness in the name of Advaita – a pitfall we see in many modern ‘gurus’.

Today, as Muruga slays the asura to transform him into a divine being ever abiding in the grace-filled presence of Skanda, we celebrate this as Soora Samhaara.

The sacred place where the puranic event took place is Tiruchendur in southern Tamil Nadu, where these events are enacted by the devotees. Skanda Purana combines sacred geography with inner sadhana – an important core element of puranic literature, through a living culture. It is not history in the ordinary sense of the term but it is more real and truer than any ‘history ‘ as we understand it.

May Skanda perform it in the heart of every devotee eternally.