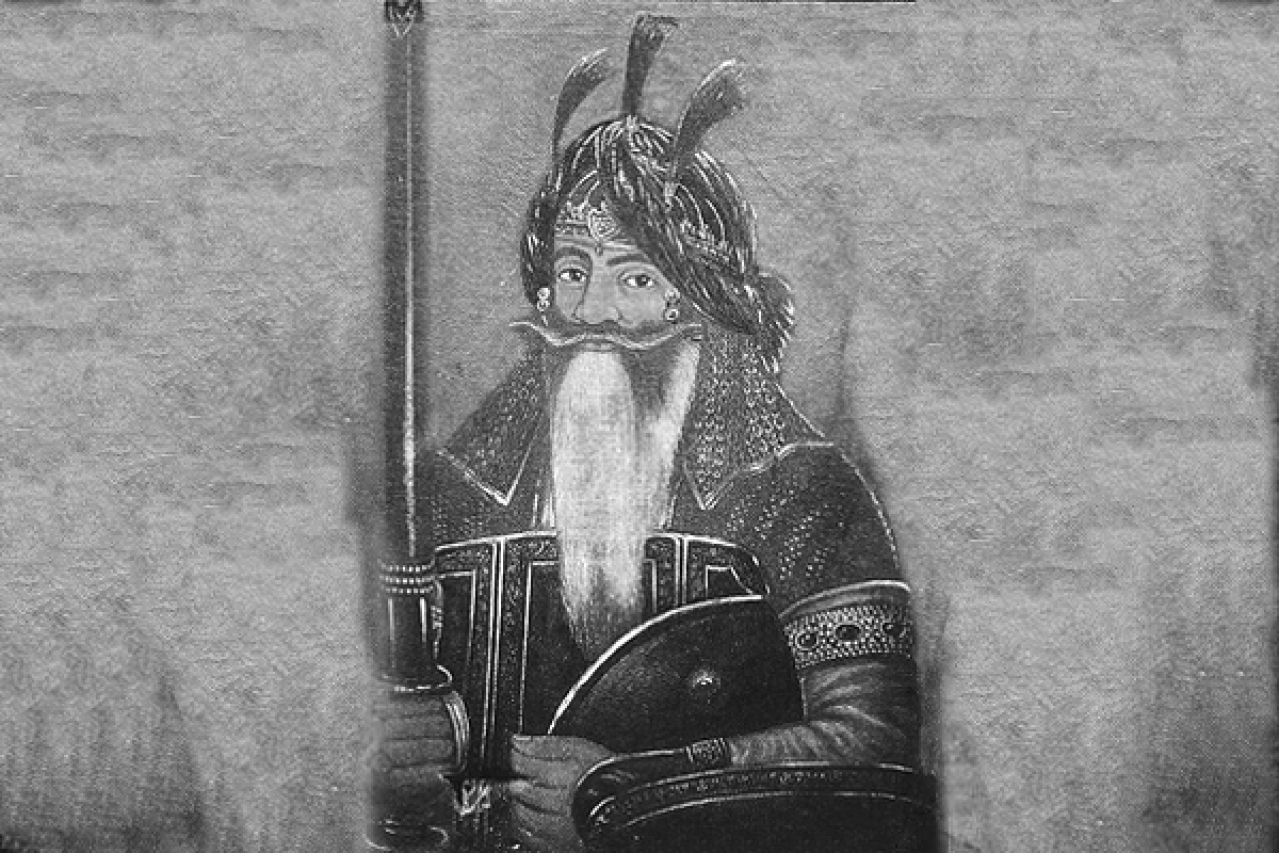 Hari Singh Nalwa was the general of the Sikh empire of Ranjit Singh who, to a large extent, was responsible for shaping the political boundaries of modern South Asia as we know them today. During the turbulent late eighteenth and early nineteenth century, when the East India Company was fast gobbling up territories of the Indian sub-continent from the east and the south, Hari Singh Nalwa expanded the empire of Ranjit Singh further to the west and to the north. He brought Kashmir and Multan under the Lahore durbar while also extending Sikh rule beyond the Indus, bringing the Sikhs face to face with their old enemies - the Afghan kingdom of the Durranis - with whom they had been constantly at war during the eighteenth century when the notorious Ahmad Shah Abdali had ravaged the Punjab with his plundering raids. Such was the destruction caused by Ahmad Shah in the Punjab that it gave birth to a common idiom popular in Punjab even today :

Rest all is the property of Ahmed Shah)

This time however the shoe was on the other foot. Having consolidated their hold over the Punjab through the eighteenth century, the Sikhs were after the famed Afghan capitals of Peshawar, and eventually Kabul.

Peshawar was the winter capital of the Afghan kingdom of Durranis. More than just an administrative centre, Peshawar had also been the cultural capital of the Pashtuns throughout history – from the Gandharan civilisation of 5th century BC to the Kushan empire of Kanishka of the 1st century CE down to the Mughals in the 16th century, Peshawar served as the nerve centre of Afghan life and culture for millennia. In the 18th century, to imagine an Afghan kingdom without Peshawar was like imagining a Bengal without Kolkata, a Maratha empire without Pune, a Punjab without Lahore.

Under orders from Ranjit Singh, Hari Singh Nalwa wrested Peshawar from the Afghans. Were it not for Hari Singh, Peshawar might well have remained with the Durranis, and the British, having annexed Punjab and Sindh by 1849, would have remained content drawing the boundaries of their empire at Rawalpindi itself. The Pakistan of today would not have inherited Peshawar and most of its north-western tribal areas.

Rise Through The Ranks and the Capture of Peshawar

Born in 1791 in the city of Gujranwala (now in Pakistan) Hari Singh arrived at the court of Maharaja Ranjit Singh of Lahore as a young boy of 14. He quickly rose through the ranks to become the commander-in-chief of the armies of the Sikh empire by distinguishing himself in a series of battles, quickly fought, and decisively won.

With each victory, the Sikhs progressively moved westwards, alarming the Afghans and worrying the British. The Afghans often sought British help during these battles but the latter calculated that with the Sikhs led by Hari Singh Nalwa and Ranjit Singh, the Afghans didn’t stand much a chance and preferred to keep their distance from the wars between Sikhs and Afghans, waiting for a more opportune moment to intervene.

In 1827, Attock on the north-western edge of the Punjab was captured from the Afghans after a bloody battle and Hari Singh Nalwa soon found himself at the ramparts of the great city of Peshawar which was in 1834 defended by Dost Mohammed Khan, the Emir (king) of Afghanistan.

The actual conquest of Peshawar however turned out to be an anti-climax. No great battle was to be fought to conquer the great city. Such was the reputation of Hari Singh Nalwa by this time that the Afghan garrison gave up after a token resistance and the Sikhs entered the famed Bala Hissar fort of Peshawar without a fight. The Peshawar fort was renamed by the Sikhs and called Sumer Garh, after the Sumer mountain in the Himalayas that Guru Nanak is believed to have visited during his travels.

Hari Singh Nalwa had by now earned the sobriquet of ‘ The Terror of the Afghans’.

The Battle of Jamrud

Under Ranjit Singh, Sikhs expanded rapidly beyond the Punjab to include Kashmir in the north and Multan in the south to their dominions. However it was Kabul that Ranjit Singh desired above all and he trusted Hari Singh Nalwa to deliver it to him. With the fall of Peshawar, Sikhs moved further west to occupy the strategic town of Jamrud overlooking the historic Khyber Pass – considered the gateway to India by invaders from Central Asia throughout history. Following Dussehra celebrations in Amritsar in October 1936, Hari Singh, accompanied by prince Nau Nihal Singh – Ranjit Singh’s grandson - quickly subdued the fiercely independent tribals of the area who were known to stubbornly resist all forms of authority. Jamrud too fell quickly sending shockwaves through South Asia, and leaving the Khyber Pass within a stone’s throw reach of the Sikhs.

Right across the Khyber Pass lay the bustling Afghan city and commercial centre of Jalalabad, with Kabul another 150 kms to the west. Dost Mohammed knew that once the Sikhs crossed the Khyber Pass and captured Jalalabad, Kabul would fall within a matter of days. To save his empire, he gathered his wearied forces one last time and waited nervously for the right moment.

Meanwhile in Lahore, preparations were in full swing for the wedding of Kunwar Nau Nihal Singh. Sir Henry Fane, Commander-in-Chief of the British Armies in India was invited as a special guest for the wedding at Lahore. On 22 March 1937 Sir Fane witnessed a splendid celebration of Holi at Lahore in which in his own words “ the very face of the earth looked red from the profuse lac-dye and rosewater”. For the wedding itself, a splendid show of military strength was planned to impress the British for which troops were withdrawn from all parts of the Punjab and ordered to Lahore.

As Kunwar Nau Nihal Singh left Jamrud for Lahore along with a sizeable part of his entourage, Hari Singh Nalwa was left in charge of the Jamrud fort with only 800 men. News of the weakly defended Jamrud fort quickly reached Kabul, and wasting no time, Dost Mohammad Khan swooped down on Jamrud with a force of 25,000 men. A fierce battle followed in which Hari Singh Nalwa was fatally wounded on 28 April 1837. However as he lay on his deathbed, Nalwa instructed his second-in-command, Sardar Mahan Singh Mirpuri, to not let the news of his death leave the walls of the fort.

Mahan Singh had Nalwa’s garments hung on the fort to trick the Afghans into believing that the general was still alive, while he sent for reinforcements from Lahore. The Afghans knew that Nalwa had been wounded but such was his terror that for four days they contented themselves with firing volleys at the fort from a distance, never daring to storm the fort until the news of his death was confirmed. On the fifth day, a reinforcement of 10,000 men arrived from Lahore and the Afghans fled back to Kabul. Jamrud was defended, but the great general was lost. In keeping with his last wishes, his ashes were mixed with the mud at the wrestling pit at Lahore fort, where young warriors learned their first lessons in the art of fighting.

Following Nalwa’s death, the westward expansion of the Sikh empire was halted and the Khyber Pass became the boundary between the Sikh empire and the Emirate of Afghanistan. This was the boundary that the British inherited in 1849 at the end of the Second Anglo-Sikh War and the annexation of the Punjab, naming it the Durand Line. 181 years after his death, this boundary separates the states of Afghanistan and Pakistan, cleaving the ancient Pashtun heartland into two, and to a great extent, being the cause of the tribal unrest in Pakistan’s north-west.

Hari Singh Nalwa was also a prolific builder and administrator. He founded the city of Haripur in 1822, which is named after him, in the Khyber Pakhtunkhwa Province of Pakistan. The city is located a few miles from the ancient site of Taxila and was the first planned town in the region. Today, Haripur is a bustling city with a population of close to a million in the entire district.

Hari Singh also built the historic Gurudwara of Panja Sahib at Hassan Abdal near Peshawar to mark Guru Nanak’s passage through the region. The Gurudwara today is a major pilgrimage centre for Sikhs.

Ruins of Hari Singh Nalwa’s haveli exist in the Chakwal district of Pakistan, located adjacent to the famed Katas Raj temple of lord Shiva. The ruins and the temple attract visitors and history-lovers from Pakistan and from India.

In 2013, the government of India issued a commemorative stamp to honour the great general.

The Saffron from Bhagat Singh)

Despite this, the name of Hari Singh Nalwa is not known to most Indians, and the above ode to him written in 1967 remains the only depiction of this great general in popular culture. His 181st death anniversary is being observed on 30th April 2018.