Stephen Hawking: A Scientist Who Brought The Cosmos Closer To Common Man 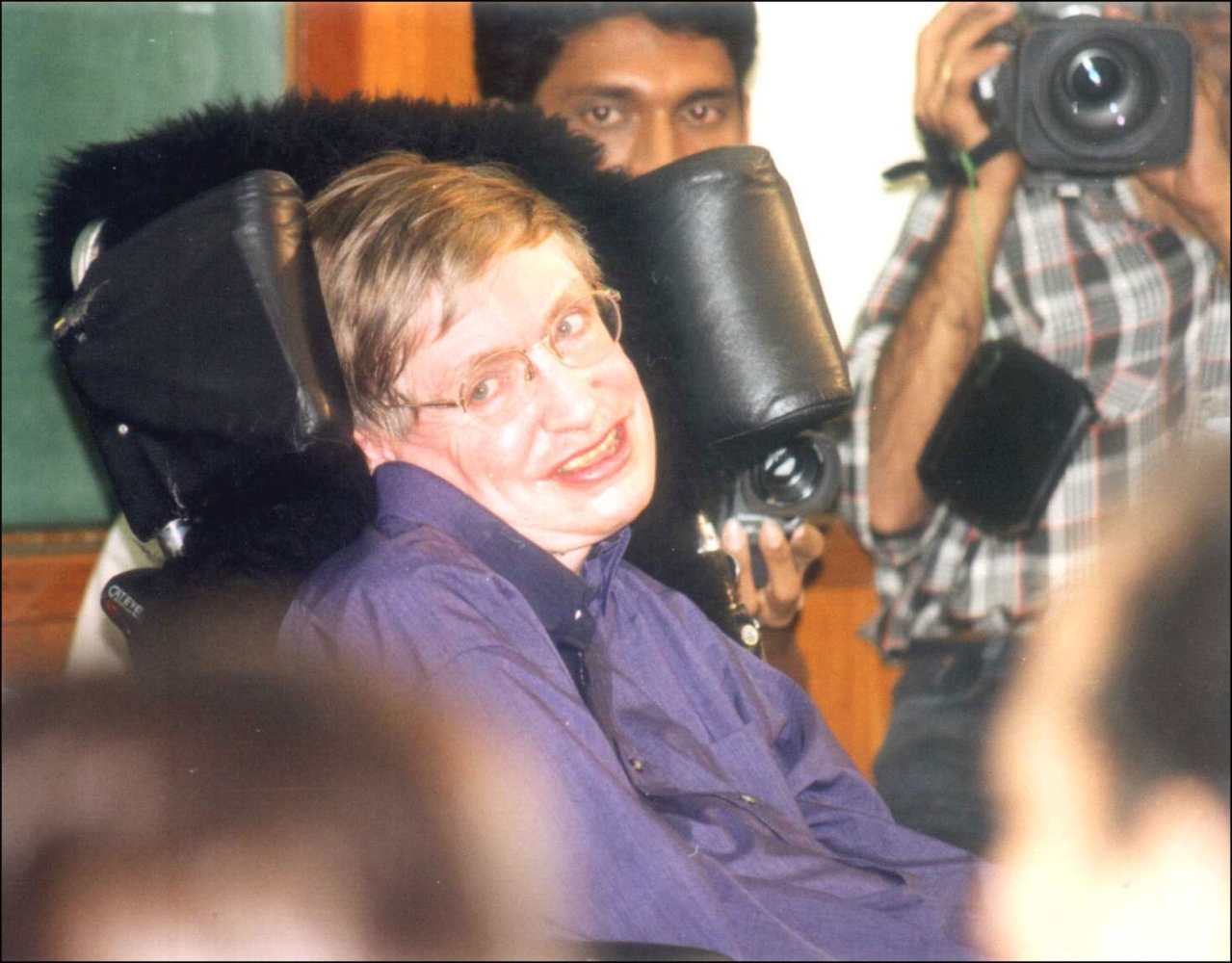 Carl Jung would call it syncronicity and Richard Dawkins may call it as an instance of his Petwhac. That exactly 300 years after the death of Galileo he was born and died on the International Pi day, (as here in India), seems to be the way numbers in cosmos contrive to pay homage to a great mind. Stephen Hawking sat in a wheel chair and with synthesised voice verily built the tower of Babel with his equations, which this time united humanity and challenged the certainty of the creator deity.

He was not just a great physicist but also a great populariser of science. With his A Brief History of Time (1988) he brought the then cutting edge cosmology to the general public. He humorously remarked that someone told him each time he included an equation in his book that would halve the sales. So he “resolved not to have any equation at all” and yet in the end he had to “put in one equation, Einstein's famous equation, E=mc^2.” He added, “I hope that this will not scare off half of my potential readers.”

His discovery of ‘Hawking radiation’ showed that black holes also emit radiation, lose energy and ultimately disappear. That was in 1970s. Then Hawking created a paradox. A sort of thought experiment. What would happen to the encyclopaedia, a large body of information, thrown into the black hole? Will it also be destroyed for ever? It should be. But then quantum mechanics says that information cannot be lost. So this is the paradox. Meanwhile, in 1973 famous physicist John Wheeler had argued that the black holes were bald. That is they do not have hair, which here mean 'minute deformities in space-time'.

This divided physicists into two teams - one backed the no-hair model and the other, including Hawking, asserted that black holes have hair. In a 2015 conference, Hawking proposed that “the information is stored not in the interior of the black hole as one might expect, but on its boundary, the event horizon". In 2016, in a paper published together with Malcolm Perry and Andrew Strominger, Hawking explained the hair of the black holes “in terms of soft gravitons or photons on the black hole horizon, and shows that complete information about their quantum state is stored on a holographic plate at the future boundary of the horizon”.

So the black holes are no more ‘black’ as they were made out to be. Rather they leak radiation and information in the form of ghost holographs perhaps even into another universe! But just think about the persistence of Hawking’s mind - from 1970s to 2016 relentlessly attacking a problem and seeking a solution!

Hawking often had a brush with the religious figures of the West. In 1981, when he attended conference on cosmology organised by the Jesuits (and let us not forget Jesuits themselves have made some stellar contribution to modern astronomy), Pope John Paul II told him that it was okay for the physicists to study “what happened after but not to probe 'Big Bang' itself as it was the realm of god. In the narration of Hawking, one can almost discover a devilish grin when he writes:

I was glad that he did not know the subject of the talk I had just given at the conference - the possibility that space-time was finite but had no boundary which means that it had no beginning, no moment of Creation. I had no desire to share the fate of Galileo, with whom I feel a strong sense of identity, partly because of the coincidence of having born exactly 300 years after his death!

In a way for an avowed atheist who pooh-poohed the notions of hell and heaven and afterlife as childish, one can say he was deeply spiritual in his own way. Often he returned to the problem of a creator deity and what implications modern cosmology had for a creator. In A Brief History of Time he wrote, “if we discover a complete theory, it would be the ultimate triumph of human reason – for then we should know the mind of God.” And he further asked “What is it that breathes fire into the equations and makes a universe for them to describe?” In this he echoed the statement of Srinivasan Ramanujan, when he said, “an equation has no meaning for me unless it expresses a thought of God”.

For both Hawking and Ramanujan in this conception, god is immanent in the existence. This god is more the impersonal Brahman and seeing the universe including the equations as its emanations. Unfortunately, the much publicised interaction between science and religion, portrayed by Western media circus in the form of war and confrontation, assumes an entirely different quality in the case of Indic religions. In the first edition of Stephen Hawking's famous bestseller A Brief History of Time, there was an introduction by astrophysicist Carl Sagan in which he stated the word 'god' fills the pages of the book. By equating god with the structure and process of the physical universe, Sagan introduced a notion of god that is theologically incompatible with the Western notions of creator-deity.

This is also a book about God ... or perhaps about the absence of God. The word God fills these pages. Hawking embarks on a quest to answer Einstein’s famous question about whether God had any choice in creating the universe. Hawking is attempting, as he explicitly states to understand the mind of God. And this makes all the more unexpected the conclusion of the effort, at least so far: a universe with no edge in space, no beginning or end in time, and nothing for a Creator to do.

It is easy to see that this is the impersonal all pervading god, God of Spinoza and of course the Brahman of Hindus. And none would ever pronounce it so openly except Michio Kaku. And Hawking in his books kept returning to this theme. In his 2010 book A grand Design he took on the more sophisticated notion of ‘fine tuning’ and wrote:

Vatican had always been uncomfortable with Hawking despite Hawking, perhaps like Richard Dawkins, considering himself to be a cultural Christian. Vatican with its army of theologians and astrophysicists could clearly see where the no-creator wonderment of science leads to - towards a Spinozan spirituality which can very well gel with pagan spirituality world over - particularly the Hindu-Buddhist. As late as 2017, Jesuit astrophysicist Guy Consolmagno took a dig at Stephen Hawking

Stephen Hawking said that he can explain God as a fluctuation in the primordial gravity field. If you buy that, it means God is gravity ... maybe that’s why Catholics celebrate mass!

Despite the bad joke, it was actually a retreating trumpet of Christian theology. No longer can science be made to be the handmaiden of theology. In such attempts, science always emerges as a greater authority than faith.

The confusion can be traced back to the scientist-theologians of Newton’s day, who saw God as having the job of filling the gaps in physics theory. But even more, the fault rests with Christian apologists who trued to baptize the Prime Mover of Aristotle’s physics by identifying it with the Christian God. ... Trying to use ‘science’ to prove the existence of God had the effect of making science a greater authority than religion - it gives science the last word over faith.

‘Would You Baptize an Extraterrestrial?: . . . and Other Questions from the Astronomers’ In-box at the Vatican Observatory’, 2014

So the god of the gaps has to be abandoned. The god as prime mover - the first cause needs to be jettisoned. Now the theology is back to square one - just god is the god of faith. - accept him only on the authority of faith and the church. Hawking had among others served in this retreat made by Christian theology from its aggressive encroachment of the philosophy of science from the mediaeval throughout the colonial times to even before a few decades.

Stephen Hawking also had alarmist views about both alien intelligence and artificial intelligence. He was not comfortable with our own contact with alien intelligence and our research into artificial intelligence. He warned against (Search for Extra Terrestrial Intelligence) SETI to contact alien life as aliens could be “vastly more powerful and may not see us as any more valuable than we see bacteria.” In the case of Artificial Intelligence (AI) he was even more detailed: "Success in creating effective AI, could be the biggest event in the history of our civilization. Or the worst. We just don't know. So we cannot know if we will be infinitely helped by AI, or ignored by it and side-lined, or conceivably destroyed by it. ... Unless we learn how to prepare for, and avoid, the potential risks, AI could be the worst event in the history of our civilization.”

Perhaps, it is possible that while he moved through his own domain experience, towards natural pantheism closer to the conception of the divine in Hindu-Buddhist traditions, in the domains of non-human intelligence he harboured a deeply Christian prejudice. At best it can only be a suggestion.

Stephen Hawking the man apart from the physicist was a very complicated personality. A brave fighter, he demonstrated the power of indomitable human will over some of the worst circumstances, which would break down most of the humans. His personal life was stormy. And to this writer , it was unfortunate that Hawking allowed himself to support the BDS movement against Israel. It is perhaps the Haldane-complex that plagues some sections of the science establishment in the United Kingdom. Haldane the biologist and the Marxist, realised it later that in the utopia state of Marxism he supported, his own science was getting wiped out. The cosmology of Hawking that precluded a creator and teasingly said that the universe may not need a creator at all, will be taught in the universities of Israel but if the Palestinian State ever materialises, then in the streets of that Palestine the books of Hawking would be burnt. This is a simple truth many otherwise intelligent ‘liberals’ living in the safety provided by the secular humanism of the West fail to realise.

On the whole, he made this planet richer in terms of knowledge and if ever the intelligent aliens about whom he was so concerned arrive on planet Earth they most probably will have his works for their own reference and validation. Now that he has passed into the great silence of dimensions, he belongs even more so as planet Earth’s contribution to the cosmic heritage - in him we have a definite entry into Encyclopaedia Cosmica - even when it is thrown into a black hole!