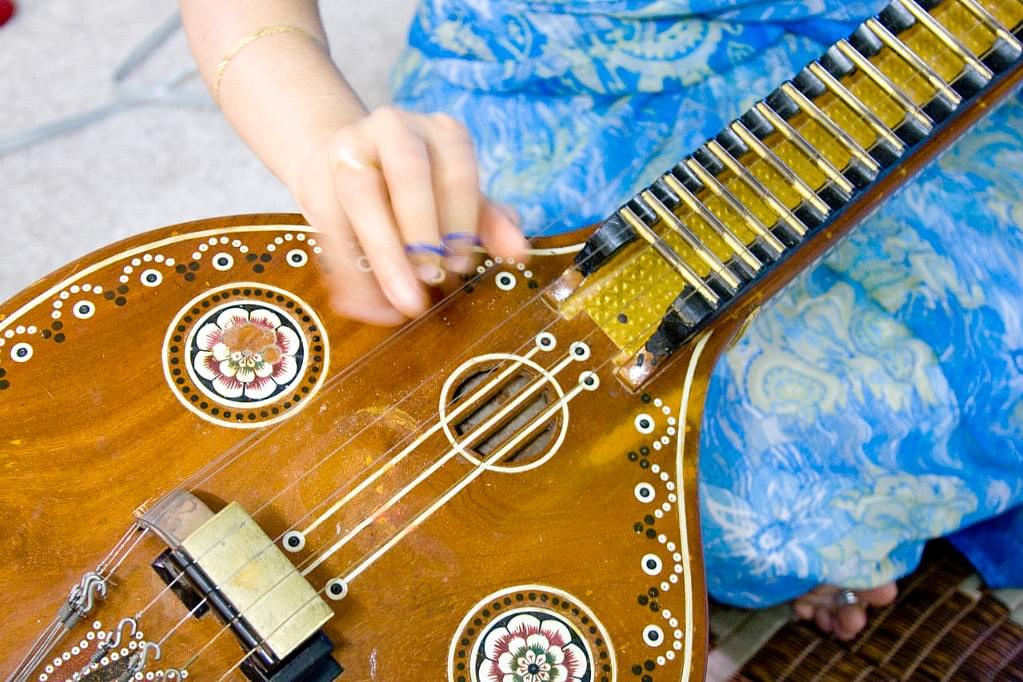 Recently, there was a hullabaloo over the participation of O S Arun in a Christian Carnatic concert and the subsequent focus on an album of Christian Carnatic songs. Various Carnatic artists, both famous and not so famous, came out in support of the album and labelled those who raised concerns communal and narrow-minded. One famous artist tweeted that he pledges to release one Carnatic song on Jesus or Allah every month just to spite the people who are finding an issue with this.

This comes close on the heels of another storm that brewed over Christian Bharatanatyam and Kathakali dance pieces. During both controversies, the media slandered the concerned music and dance lovers who were raising the issue as communal hate-mongers.

Considering the vile comments and threats issued by many on social media regarding Karnatik compositions on Jesus, I announce here that I will be releasing one karnatik song every month on Jesus or Allah.
T.M. Krishna #art #religion #jesus #allah #communalism #freedom #music

Most of these “vile comments” are actually just from music lovers asking how after being educated in Carnatic music under the guru parampara, a Carnatic musician can collude with the “stooges of Vatican”.

The defence of the artists has been that dance and music transcend boundaries and are secular arts, to be freely enjoyed by everyone. Nityashree Mahadevan, a popular singer and granddaughter of the great musician D K Pattammal, who is in the eye of controversy for singing the song “Prabhu nee samanulevaru” in the album, issued a defence that the song does not replace Rama with any other name and “it would be completely unacceptable” to do so, after a severe backlash called for her boycott during the upcoming music season in Chennai.

Numerous albums and songs have been released on Jesus and Mary in the past; the most famous of these was released in 2008 by none other than Aruna Sairam. There was no controversy raised then. Sairam also collaborated with Western musicians and released a fusion album featuring traditional Indian chants and medieval European Christian chants. That album was very well received. Why, then, is there a stink being raised now?

The albums released thus far have been original Christian songs set in Carnatic music. Carnatic music, as such, is available to anyone who has learnt it to put to use. If a composer has used their own mental faculties to set lyrics composed by them to the tune, one can still appreciate it as art for art’s sake. This time, however, the album at the centre of controversy contains songs that have blatantly plagiarised Tyagaraja, one of the trinities of Carnatic music. Jesus has been substituted for Rama in the kriti “Rama nee samanamevaru (Who is equal to you, oh Rama)” which has been sung as “Prabhu nee samanulevaru (Lord, who are your equals)”. Note the use of the plural “equals”, implying the plurality of Hindu gods including Rama.

In the face of Mahadevan maintaining that the songs are similar but not the same and that Rama’s name has not been replaced with another, the same can be said of all the songs plagiarised by the Bollywood musical industry. By changing bits here and there, one cannot claim to have created something new. A detailed analysis of the similarities and differences are beyond the scope of this article and users can listen and validate for themselves; however, this writer would like to draw attention to the fact that they did not even change the raga family. All it takes to shift from kharaharapriya, the raga of the original, to shankarabharanam, the raga of the Christian version, is a single grahabheda (tonic shift).

Christian missionaries have been indulging in this sort of plagiarism for quite some time and it has gone on largely unnoticed by the mainstream. There is a Yesu Suprabhatam, Christ Bhagavatam, and Jesus Sahasranamam. There are many churches in Chennai with Dhwajasthambhams. There are ghee-in-lemon lamps and kumkumarchanas for Mary. The famous Velankanni church, which is an important pilgrimage centre for Indian Christians, sees a yearly padayatra where Christians from nearby villages walk to the church in September. This practice of walking to the church pre-dates the building of the church. Around Navaratri, Hindus of the area used to do a padayatra (pilgrim walk) to a shore temple of Shakti which was built to commemorate the place where Shakta tradition holds that Maa Parvati gave the spear – Shakti Vel – to her son, Murugan, before he went on his first war. When Christianity spread in the area, they simply appropriated the practice and turned it into a Christian festival.

This slow cultural appropriation is the modus operandi for digesting a native culture and completely replacing it with an Abrahamic one, successfully followed everywhere by the proselytising Abrahamic faiths. The sentinel example of this process is the ancient pagan practices of celebrating the winter solstice, which was converted into Christmas.

The missionaries appear to be doing something similar here. They have turned yoga and meditation into secular practices and now they have Christian Yoga and meditation. Now they are secularising Carnatic music and Indian classical dance. Tomorrow they will tell you how the shankarabharanam raga is actually yesobharanam and how it is based in the Bible; and the media will extol the same and expect us to applaud, or will run a smear campaign against the discerning. My concern, however, is that there would be nobody left to even identify such appropriation and call it out if it happens sometime in the future, because we Hindus are quick to jump on the “secular” bandwagon and say our culture and its symbols have nothing to do with our religious beliefs.

Can anything be further from the truth? When any musician or dancer performs their art without understanding the bhavam (emotive spirit of the lyric) behind the composition, we reject such a performance as soulless. The bhaavam is the life of the performance and it can only stem from bhakti (devotion) and understanding of the spirit of the composition and the composer. Carnatic music and Indian classical dance are rooted in Hinduism, just like yoga is. Without Hinduism and bhakti, there is no glory in the music or the dance. When we see a Vempati Chinna Satyam dance, the Shivashtakam, we see Shiva himself doing the tandav. When we hear a Balamuralikrishna sing the Pancharatnakritis, we can visualise Tyagaraja himself doing padapuja of Sri Rama. This is possible only due to the devotion of the artist towards the art and the composer and deep understanding of the emotive spirit behind the composition. Take the emotion away, and there will be no difference between these great artists and any learned member of the audience. We sway to the emotive spirit and not the brilliance of the jatis or the swarams.

While the leftist ecosystem expects us to stand by and watch as culture is appropriated, and celebrate it as some great achievement of secular ideals, non-Hindus become heads of Kalakshetra and remove idols of Nataraja himself. Some singers may be ready to kill the bhavam for whatever compulsions they may have, and then claim to have done it because art is secular and they want to foster communal harmony; but we, as art lovers, would do well to remember that there is no Indian classical music and dance without Hinduism. We should remember this not only for the sake of art, but for the sake of Hinduism itself.

Remember, the cultures and religions that let their practices be digested into Abrahamic faiths thinking, “Oh, what harm can come out of cultural appropriation”, are today extinct, and we learn of them only in museums and encyclopaedias. Cultural appropriation is dangerous. It strips a culture of its uniqueness and makes the followers of the religion that the culture is based in to think there is nothing special about their way of life – and this is what stirs trouble.

This rarely happens in one large sweep; it is a gradual process. We view each such small change as harmless and keep adjusting to the new equilibrium, losing out on it one bit at a time. New generations do not even have an idea of how things stood even a few decades ago and directly start from the new state of things, and thus whole cultures and traditions just vanish and are replaced by their new form. Consequent generations have no knowledge or pride in their native inherent culture and look at everything as an import of the West and keep feeling inferior to the invading cultures.

Protect your culture, stand up for the great composers of Carnatic music and Indian classical dance, for yoga and its origins from Shiva. The media and artists, driven sometimes by selfish motives, money, and vested interests, would slander your stand as bigotry. They have all the reason to do so as the preservation of Indian culture is not their priority. Be unapologetic about your stand, voice it out loud and clear, and boycott their concerts as the cause is worthy. Hinduism and Indian culture are worthy enough to be preserved in the face of this relentless and all-devouring slow-but-steady evangelism of the Abrahamic religions.