The Colonial Roots Of Sadhu Lynching 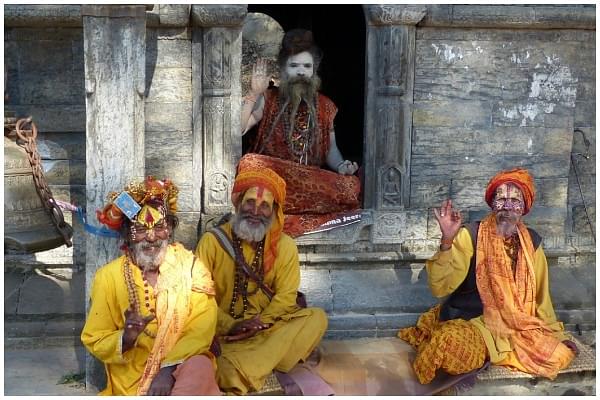 Sadhus at a temple.

The Negative Stereotype Of The Sadhu Goes Back To Colonial India

The British considered sadhus, particularly the wandering monks, as rebels who were instigating the people against the British.

They were seen as having considerable influence on the people. The British wanted to destroy that. So did the evangelicals.

So, the British CID created elaborate dossiers on wandering sadhus.

Growing up in Tamil Nadu in the 1970s, many of us heard stories of sadhus abducting the first-born children "because the magical formulation they do with the skulls of the first-born gave them magical powers".

When going to school, apart from being instructed to never accept anything from strangers, there were two additional instructions, "never tell you were first born" and "never accept holy ash from unknown sadhus”.

It took decades to find out that these instructions had actually been disseminated by the British CID and became part of the rural lore even in post-independent India.

Indian tradition by itself cautions against fake sadhus. Remember Ravana came as one to abduct Sita in the epic, Ramayana.

The Arthashastra also cautions about spies in the garb of sadhus.

The Mahabharata speaks of a cat faking itself as a sadhu in order to get rats. Duryodhana tells the tale actually to ridicule the Pandavas taking up tapas.

So, the notion of fake sadhu is not unknown to Indian society.

But there is a difference. And a paradox.

In the Indian tradition, we did not create a negative stereotype of wandering monks.

Let it be stated clearly: Hindu culture is perhaps the only culture in the world that has for millennia consistently fought against all kind of stereotypes.

But the British government took extraordinary efforts to create that stereotype, putting its bureaucratic network to effective use.

Historian William Pinch makes an insightful observation into this aspect of history (unusual too for his type of scholarship) that shows how the British over-laboured to disseminate this negative stereotype:

That sadhus generally were seen as a potential source of criminal mischief by officials of the Raj is evident in the publication in 1913 of a police handbook in Urdu that described the various religious orders and, in detailed linedrawings, examples of representative figures down to the distinctive sandalwood-paste sect marks.

Sadhus would soon be considered a fount of outright sedition with the emergence of a newer form of resistance to colonial rule: mass nationalism. The colonial distrust of monks can be perceived not only in the early disdain for the Mahatma’s political style, but also in the official attitude toward monks in north India who gravitated toward Gandhi in the early 1920s.

... It was only to be expected that police and intelligence officials would editorialize negatively about the morals, behavior, and sincerity of religious commitment of individuals opposed to colonial rule

. ... As such, the “political sadhu” represented an important example of the ties that bound religious community, or sampraday, to society. Colonial administrators may not have appreciated the subtleties and importance of sampraday; they certainly feared, however, the power of sampraday loyalties to challenge even British imperial authority, and they strove therefore to dismiss the sampraday dimension of what they characterized as a political sadhu “problem.”

Of course, Mahatma Gandhi understood the trick of the British.

Whatever criticism a section of Hindus may have for Gandhi, his grasp of the power of traditional symbols eluded even Veer Savarkar.

He realised how the British were demeaning and destroying the traditional image of a sadhu. He also understood the power of that image. He himself assumed the form of a traditional wandering sadhu, earning himself the derogatory name of "half naked fakir".

But one should realise how much that image of Gandhi also boosted the image of traditional sadhus.

Unfortunately, Jawaharlal Nehru had no understanding of this dimension of Gandhi, and media in post-independent India played heavily on the sadhu stereotype for cheap thrills.

So, the lynching of sadhus in Maharashtra shows how much we have fallen for the colonial stereotypes even in the villages of India.

The result is as simple as it is dark.

The media in India will never generate an outrage for the lynching of sadhus. The same media which generated the ‘lynchistan’ narrative will fall silent on the lynching of two saffron-clad humans — precisely because they were dressed in saffron.

Although, through sustained ground reporting, my colleague Swati Goel Sharma has demolished the lynch-libel on Hindus which the national English media and international media imposed so strongly.

Even so, the lynching in Palghar shows that the need for decolonising the Hindu mind is actually a project of higher urgency than most of us think.