The ‘Haaretz’ Paradox: Why Would An Israeli Newspaper Propagate The Myth That St Thomas Came To India And Was Killed By Hindu Priests? 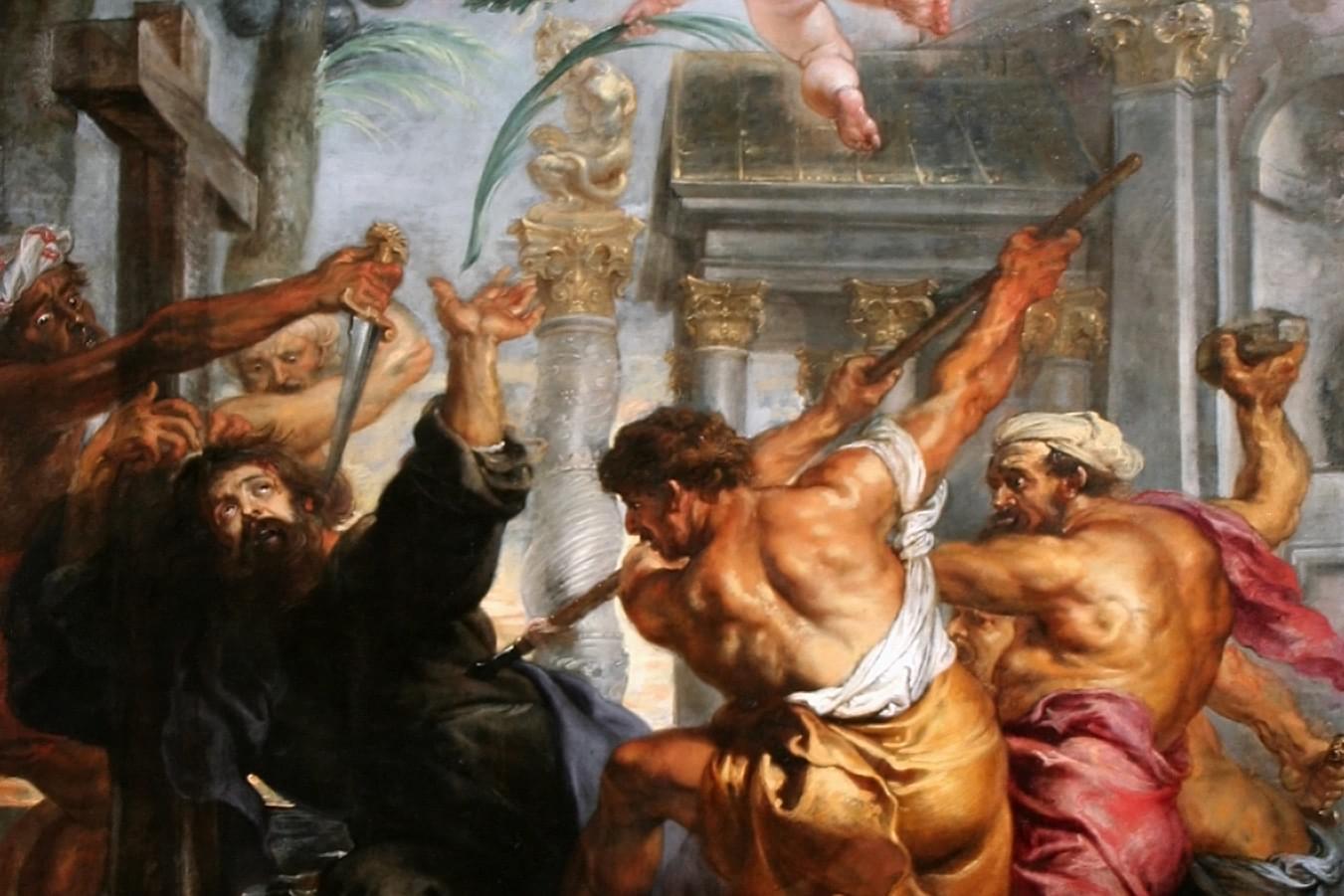 On 30 April 2020, the Israeli newspaper Haaretz reported on a picture that is part of the recently declassified confidential material relating to the Second World War — particularly Holocaust of the Jews — from the Vatican archives.

The initial study by researchers reveals some disturbing facts. Ofer Aderet, the correspondent for Haaretz reports:

The researchers conclude that the Catholic Church knew about the Holocaust well before it has admitted knowledge of it, and that it appears that the church deliberately concealed documents that might further tarnish the church’s reputation regarding its conduct during the Holocaust.

On 27 September 1942, the United States sent a letter to the Vatican.

It contained a report on the mass killing of Jews in Nazi-occupied Poland.

The report spoke of how Jews were getting mass-murdered, with specific mention of 50,000 Jews killed in Lvov and another 100,000 killed in Warsaw.

The US envoy requested Vatican if it had any information that would corroborate the information in the report.

The new research indicates that after the pope read the letter and the report, Vatican Secretary of State Luigi Maglione wrote: “I don’t believe we have information that confirms this serious news in detail. Correct?” Other documents show, however, that at the time, the Vatican did have sufficient information to confirm and expand on the report from the Americans, but that out of anti-Semitic and political motivations, Vatican officials chose to minimize and discount their value.

As the Vatican did not respond, the US insisted again.

Finally, Cardinal Montini wrote that the response should be that Vatican ‘had heard about the harsh treatment of the Jews,’ but had no way of assessing the accuracy of the information.

In reality, nine days before the US asked Vatican, the latter had received similar reports from two sources — one being its own Bishop.

So what explained the muted response?

Angelo Dell’Acqua, a Papal Adviser, had questioned the veracity of the reports ‘because the Jews also tend to easily exaggerate.’

In others words, Antisemitism played a role in shaping the response of the Vatican.

At the heart of Christian Anti-Antisemitism are two factors.

One is that though they were the original people of the book, the Jews had rejected the claim of Jesus to be the messiah.

The second and the more important factor in Christian Antisemitism is the charge of Deicide.

In the dramatic narrative in the Gospels, the Jews were made to say that they and their descendants would carry the responsibility for the act of Jesus’ crucifixion, thus absolving the Romans.

Since the Gospels became the sacred text of Europe, the Jewish people scattered all over Europe became the targets of hatred for the next 1,700 years.

Connected to this was the blood-libel charge — elaborately built on false claims of rituals where Jews were falsely accused of killing Christian children.

The silence of the Pope and the role of the Church in the build-up to the Holocaust should be understood thus in the context of the blood-libel and charge of Deicide on the Jews.

The Parallels With India

The Church has been propagating a similar fictitious ‘sin’ on the Hindus — the murder of St Thomas.

There have been quite a number of tracts and propaganda books that speak of how Hindus, particularly Brahmins, plotted and killed St Thomas.

Today, the St Thomas myth has been revived among Christians.

Any Hindu resistance to the massive proselytising industry gets linked at once to this mythical killing of St Thomas.

Crackpot theories claiming that Hinduism was nothing but Christianity brought by St Thomas and perverted by ‘cunning Aryan Brahmins’, are today fed to a gullible mass of believers as articles of faith.

The political agenda to go with this is of making India a ‘Christian Nation’. It also feeds into the pseudo-scientific racial binary of Aryan and non-Aryan.

Now, why should the St Thomas myth be talked about here?

Haaretz is an Israeli newspaper that was started in 1918. It has been constantly veering towards the radical left — more and more so in recent years.

With respect to India, it usually borrows materials from India’s own left media, like the magazine Frontline.

In this, Haaretz declares this ‘event’ with a bold heading: 72 CE: Thomas the Apostle Is Murdered in India.

In the sub-title, it adds with an additional flourish: 'According to common Christian tradition, 'doubting' Thomas, a practising Jew, was killed by jealous Hindu priests of Kali. (Or a peacock hunter.)‘

Within the article itself, the more accurate fact is presented:

Modern historians believe that Christianity actually arrived in India several centuries after the era of the historical Thomas, with the arrival of Christians from Syria and from Persia.

But in the very next paragraph, the article goes back to charging Hindus with the ‘apostle killing’:

The martyrdom of Thomas, however, took place not on western coast of India, but on the other side of the subcontinent, in the southeastern city of Mylapore, near latter-day Chennai. There, Thomas came into conflict with the Hindu priests of Kali, who killed him for insulting their deity — or simply for converting many of their followers.

Willfully Ignoring the Other Side

A Hindu critique of this charge had been written by Ishwar Sharan with the title The Myth of Saint Thomas and the Mylapore Shiva Temple and was published by Voice of India.

Sharan had done a wonderful work of studying the myth and exposing the evangelist hate agenda behind the fabricated story of St Thomas.

Even Christian theologian and author, Thomas Charles Nagy, who had produced a sympathetic account of the St Thomas tradition, was forced to write:

The two main issues that weaken the historicity of the St. Thomas story and thus make St. Thomas a controversial figure in the modern day, is the reliance on the Acts Thom, as a pseudo-historical document, as well as the flimsiness of oral tradition as an accurate recording of history.

Additionally, while the various arguments regarding the preservation of early Christian communities along the Malabar Coast are far more historically viable, they also cast some doubt over the validity of the St. Thomas tradition. It seems far more logical that Christianity was introduced to India by way of the Eastern Syrian Church, maybe as early as the fourth century CE, and maintained by subsequent migrations from those regions of the Middle East that fell under the jurisdiction of the Eastern Syrian Church.

At the same time, Nagy downplays the anti-Brahmin hatred that is contained in the St Thomas myth and completely conceals the appropriation attempts on Hinduism that the Church (including non-Catholic evangelical Churches) make using the Thomas myth.

When researching for Breaking India, I discovered the centrality of the Thomas myth to the appropriation of Hinduism.

The Church had stealthily encouraged an entire evangelist industry based on the pseudo-history of Thomas and his martyrdom at the hands of Hindus.

It had also fabricated ‘historical’ evidence like a stone cross that is said to have been sculpted by Thomas at the mount.

As a Hindu, I could understand and even respect if it were a faith tradition and would not like to puncture it with demands of its historicity.

However, the murder charge that the Church places on Hindus necessitates that as a Hindu I find out the truth.

Hence in 2010, I sent the photo of the cross sculpture to Joseph Zias, who was the Curator of Archaeology and Anthropology for the Israel Antiquities Authority for 25 years from 1972 to 1997. Pat came the reply:

Shalom. This cross story has to be an out and out fraud as the cross, representing Christianity is a rather late symbol as the early Christians wished to convert other people and the cross was not a symbol of much hope.

More curiously, Haaretz chose to use the painting of the 17th century Dutch artist Peter Paul Rubens for its piece, which shows a horde of murderous ‘priests’ with rage killing an unarmed St Thomas.

The painting, when being created, would have been done in the ignorance of those times.

But when Haaretz uses it in a modern context against ‘priests of Kali’ then that act makes the painting no dissimilar to the very recent Antisemitic painting of the Catholic painter, Giovanni Gasparro, which has rightly evoked universal condemnation.

That Hindus are unaware of the strands of hate web being woven around them is no excuse for anyone to indulge in such stereotyping of an ancient people.

And it is sadder that such an act is indulged in by a magazine that comes from a people who have painfully experienced and documented their own suffering and hence know very well what happens when such stereotypes and legends of hatred are perpetuated.