The International Solar Alliance: India’s Own ‘OPEC’ Of Future 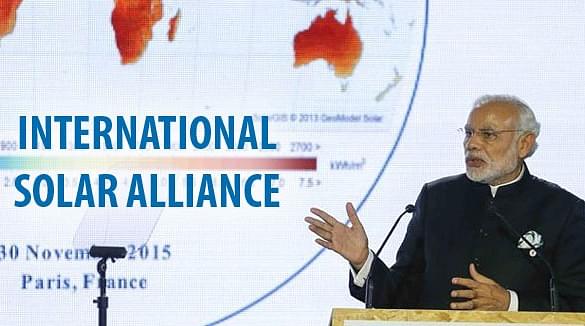 Far from the hustle-bustle of United Nations in New York and Geneva or headquarters of international government organisations in cities like Vienna and Paris, the idea of first India-led treaty-based inter-governmental organisation was talked about in April 2012 in Santanpur, a tiny hamlet in the Charanka village of the Patan district of Gujarat.

Narendra Modi, then chief minister (CM) of Gujarat, was speaking at the site for the Gujarat Solar Park. Inaugurating what was then the largest solar park in the country, Modi had said:

There are different league of nations like OPEC and others. A league should be formed among the nations which get more sun rays. India should play a prominent role into the formation of such a league and step up its R&D to lead those nations.

Modi was already an early proponent of solar power. As the Gujarat CM, he had unveiled a solar power policy in 2009, which aimed to install 500 megawatts (MW) of solar power by the year 2014 in his state. When he inaugurated the Gujarat Solar Park in Charanka in 2012, the state had already achieved an installed capacity of 605 MW, well ahead of the target date.

Little he knew that he would inaugurate the International Solar Alliance (ISA) on Indian soil less than six years later.

The idea of the ISA was first spoken of by Prime Minister (PM) Modi during the India-Africa Summit 2015. Speaking at the plenary, where 54 African nations participated, Modi had said:

Our goal is to make solar energy an integral part of our life and reach it to the most unconnected villages and communities.

When Modi visited the United Kingdom (UK) later in November 2015, he addressed a gathering of the Indian Diaspora at the Wembley Stadium in London. At this forum, he was more vocal about the Indian ambitions – “India can lead”, he said. He spoke about a solar alliance he was trying to cobble up – an alliance of countries which get a lot of sunlight and should come together to act on climate change. He named these countries ‘suryaputra’ or sons of the sun.

On 30 November 2015, Modi and then French president Fracois Hollande unveiled the plan for the ISA during the 2015 United Nations Climate Change Conference held in Paris. All countries which are located between the Tropic of Cancer and the Tropic of Capricorn were invited to join this alliance.

These countries all get 300 days of sunlight on an average, but are at a varying degree of maturity with respect to tapping into solar power. They also do not have any particular collective bargaining capacity against equipment suppliers and energy buyers. Renewable energy policies are at great variance across countries – the ISA hopes to harmonise some of these to ensure collective action on promoting solar power. Finally, the ISA aims to usher in $1 trillion of solar power investments globally by 2030 for massive deployment of solar power at scale topping 1,000 gigwatts (GW) and using efficient, high-productivity technology.

During Hollande’s visit to India in January 2016, he and Modi laid the foundation stone for the ISA headquarters (HQ) in Gurugram district. The ISA HQ will be built adjacent to the National Institute of Solar Energy (NISE) located in the Gwalpahari village. The interim secretariat of the ISA is hosted at the NISE until the HQ is constructed.

India has dedicated five acres of land at this site for the ISA HQ. India has also contributed $27 million to build the ISA campus and has committed to meeting the operational expenditure of this body for the first five years. The Indian Renewable Energy Development Agency (IREDA) and Solar Energy Corporation of India (SECI) also announced contribution of $1 million each to the ISA corpus fund at this launch event.

The framework agreement of the ISA was opened for signatures to the participating countries in November 2016 at the COP22 in Marrakech. Fifteen countries signed this agreement on the first day of COP22, with the summit ending with 19 signatures. The ISA framework agreement required that at least 15 countries ratify this deal, before the ISA could become a full legal entity. The Ministry of External Affairs, government of India, which acts as the depository for the ISA, got its 15th ratification on 6 November 2017.

Prime Minister Narendra Modi and the current French President Emmanuel Macron will jointly witness the founding ceremony of the ISA on 11 March 2018. This founding conference will take place at the Cultural Centre of the Rashtrapati Bhavan in New Delhi.

In the formative years, ISA has started working on some interesting initiatives, mostly with Indian involvement and underwriting. The African Development Bank is aiming to achieve universal electricity access and ending hunger and malnutrition by 2025 in the continent. One of the levers to achieve these objectives is to deploy solar irrigation pumps, which run on localised off-grid solar power set ups for the specific purpose of irrigating crops. The ISA is getting involved in some of these projects using the $10 billion concessional line of credit India extended to the African countries during the India-Africa Summit 2015. Up to $2 billion of this credit line can be deployed for distributed, local, off-grid solar power projects.

The ISA has also set the ball rolling on stakeholder consultation on coordinating policies and activities related to four solar energy applications – decentralised rural applications, solar mini-grids for remote areas, solar rooftops and solar-powered mobility. This consultation will enable government agencies and private parties from the member countries to assess market potential, risks and opportunities in the above areas. The member countries will be able to showcase their best practices, technology solutions, ideas to optimise costs, and outlining barriers for solar power adoption. Finally, the member countries will spell out their expectations from the ISA, so that a future plan of action can be created by the alliance.

The ISA has come a long way since its conception in Paris in 2015. There are still hurdles for this India-led body. Barring France, no other developed country has yet joined the alliance. The Paris deal has been actively opposed by the United States, and China has been on the fence. Until a few large countries, which are themselves investing in solar power, help propel the ISA, the alliance will find it difficult to raise resources.

There are other good and bad news for the solar power sector globally. While the multilateral agencies like the World Bank are looking to increase funding of renewable energy programmes, a trade war on solar equipment is looming large. Both the US and China, the largest manufacturers of solar power equipment, have their interests to protect. India has been trying to attract domestic manufacturing of this equipment. Resultantly, the three countries have been at loggerheads in international trade forums as well as bilaterally since the ISA was formed.

The ISA has the potential to change the balance of energy geopolitics from oil to sun. Consequently, it has the potential to reduce the influence of the oil producing countries in how various countries, India included, run their foreign policies as well as domestic social policies. The vision for the ISA is ambitious and a start has been made.

What Organization of the Petroleum Exporting Countries (OPEC) did for countries like Saudi Arabia, ISA can do the same for India. It is a smart investment in simultaneously achieving three objectives – taking the moral lead on climate change, creating a platform for future trade and geopolitics domination in the energy space, and emerging as the leader for the developing world on the key common issue of energy security.

Modi dreamt big on ISA and delivered. The successive Indian governments over the next few decades will now decide what leverage India generates out of this platform.