The Quest For River Saraswati: Moving From Myths To Facts 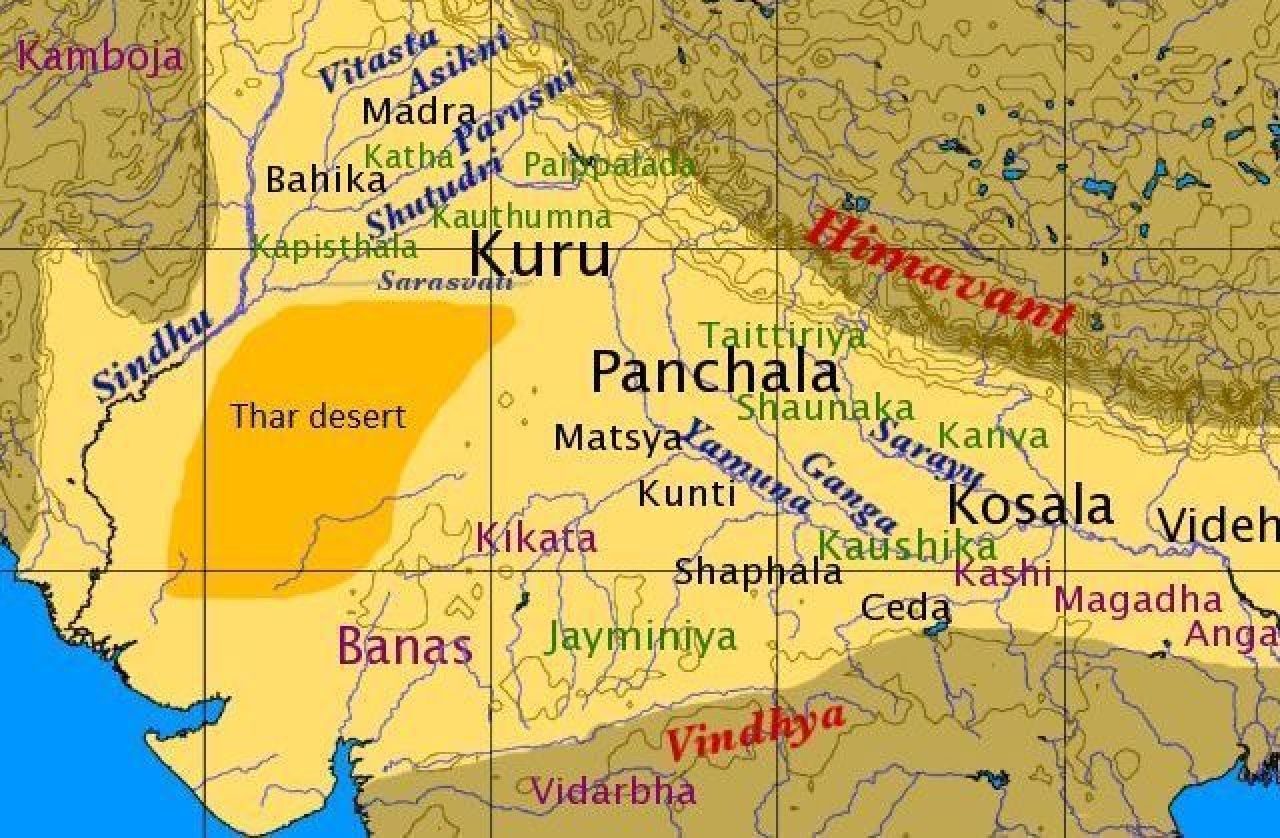 Rivers during the Vedic age.

Major General GD Bakshi’s recent book, The Sarasvati Civilization, is a comprehensive aggregation of evidence and analysis, demonstrating the past existence of the Saraswati River, and, a civilisational continuity from the Indus Valley Civilisation (IVC) into the present age.

This hypothesis contests the traditional beliefs of Marxist historiographers and colonial Indologists, who consider the Saraswati to be a myth, and maintain that the IVC declined into socio-cultural extinction for ecological reasons, and submit that it was wholly supplanted by racially-different, Sanskrit-speaking, horse-riding, nomadic foreigners.

In this article, we offer additional evidence – both physical and scriptural – to support two theses: one, that the Saraswati actually existed, and two, that the migrations forced by its desiccation are recorded in the ancient scriptures.

These, in turn, offer further support to an important conclusion: that this episode was a nature-induced interregnum, and not a civilisational break.

The physical evidence draws from governmental investigations in the 1950s, which were conducted across the Saraswati for entirely non-archaeological reasons.

The textual evidence shows that an intra-subcontinental migration, away from the banks of a slowly-dying river, has indeed been recorded unambiguously in the ancient scriptures.

A key, disruptive event which led to the decline of the IVC was the drying of the Saraswati some 4,000 years ago.

This is when the Saraswati’s two principal tributaries, the Sutlej and the Yamuna, abruptly changed course. Earlier, both glacier-fed perennials used to merge at Kurukshetra (in modern Haryana), and flow through Rajasthan to open into the sea near Kutch.

Then, the Sutlej shifted westwards to join the Beas, while the Yamuna shifted southeastwards, to join the Ganga at Prayagraj.

This crisis was compounded by a shift in precipitation patterns. It reduced soil fecundity, lowered water table levels, and initiated an insidious desertification in the Punjab-Rajasthan region.

This caused a gradual, mass exodus outwards from that area. As a result, the economy of a highly evolved, richly urbanised, millennia-old culture was devastated. People were forced to find new lands to settle in, and start their lives afresh.

These mass migrations were undertaken in different directions, including into the Eastern Gangetic plains.

They took generations to be completed, and when the arduous resettlements were finally done, only two things remained – a memory of the river Saraswati, and faint, remnant traces of her once mighty course.

According to popular belief, a quest for the Saraswati’s course only began with satellite remote sensing in the 1970s.

By this time, the green revolution too had begun, so large swathes of the river’s ancient route came to be obscured by the spread of organized, irrigation-driven agriculture.

Still, scientists were nevertheless successful in retracing the old channels.

However, there were earlier efforts – ones which appear to have been overlooked by seekers of the Saraswati.

Soon after it was formed in 1956, the Oil and Natural Gas Commission of India (ONGC as it was then named) commenced a nation-wide exercise of photo-mapping prospective areas, as a precursor to identifying petroliferous sedimentary basins.

One of the officers spearheading this effort was the late K. Varadarajan, a geologist with ONGC, and son of the legendary Trichy physician, Dr. Kalamegham.

In conversations with this writer in the mid 1990s, Varadarajan explained that a curious byproduct of this photo-geology project, was the aerial evidence of large, wide, dried river channels stretching for a thousand miles from then-undivided Punjab, through Rajasthan, to near Kutch.

Unfortunately, they were then on the hunt for oil, not lost rivers, so nothing came of the effort by way of history or archaeology. Nevertheless, the data would still be in ONGC’s archives.

And remember, that these high-quality images were taken before the green revolution, when natural features like river beds had yet to be covered by agriculture or civil constructions.

To that end, this data set constitutes a valuable source of evidence, which still awaits interpretation by historians.

A second data point is a hunt for sweet water, undertaken outside Jaisalmer town in the late 1950s to early 1960s.

The District Magistrate of Jaisalmer for a part of that period was Vinod Chandra Pande (later Cabinet Secretary, and Governor of Bihar).

He had a budget for a dozen exploratory bore wells, and a remit to find a substantial source of drinking water for the town.

After ten dry holes, Pande was forced in desperation, to turn to a friend – Dr. K. Narayanan, an ONGC geologist, then conducting the geological mapping of Jaisalmer district.

The geologist used the data he had collected, mapped the now-subterranean riparian channels, and proposed a location for drilling a bore well.

It hit sweet water, and has since remained a primary source of water supply to Jaisalmer town (the battery of wells can be seen on the left, as one drives south from the fort towards Shiv and Barmer).

Further details would be available in district records.

The point here is that what photo-geology spied from the sky, was separately confirmed by surface geology on the ground.

Obviously then, there are multiple locations where pertinent, vital information still awaits historians and archaeologists – like the archives of the Jaisalmer district collectorate, and ONGC.

The river Saraswati remains never seen yet never forgotten, because of multiple references to it in ancient Indian scriptures.

Perhaps, the most detailed, human account of it is found in the Satapatha Brahmana (SB) – an adjunct text to the ‘White’ Yajur Veda.

While much of the SB is devoted to the precise conduct of Vedic rituals, one section makes a clear reference to our lost river:

Section 1.4.1 of the SB (verses 10-20) tells us of a king named Madhava, of Videgha, who went from the river Saraswati into the eastern Gangetic plains.

He cleared forests, drained marshes, and made these new lands habitable for his people.

The lines are filled with poetic metaphors, but the references themselves are direct, perfectly clear, and unambiguous.

Verse 1.4.1.14: Madhava, the Videgha, was at [one] time on the river Saraswati. Then he went east, following the burning fire [a reference to the clearing of the forests and the marshes].

Verse 1.4.1.15: Today there are many Brahmins in the east. [But] at [one] time, it was uncultivated and very marshy, because it had not been ‘tasted by Agni’ [fire].

Even a cursory reading of the section shows that the author of the lines is referring to an individual who lived before in time; meaning, that it is a record of how a group of people living on the banks of the river Saraswati, moved east under their leader, Madhava, and used fire to clear and settle previously-forested and marshy lands in eastern Uttar Pradesh and Bihar.

The above are but two pieces of evidence awaiting fuller, integrated interpretation by experts. There are more.

For example: the integration of geological, hydrological, archaeological and old photo-geology data on a common platform.

Or, a study of the reactivation of faults in the Himalayan foreland basin using geophysical data, and its integration with bore well and archaeological data.

Such approaches are important, because, it is in the nature of rivers to change their course. The river Ganga changed its course from the Hooghly to the Padma between the 12th and 16th centuries.

The Brahmaputra, which had its own, separate delta system in eastern Bengal, abruptly changed course during the great flood of 1787, to join the Ganga. The Saraswati is no different.

Consequently, only one last line will do: The quest for our past has just begun; we have a long way to go.