The Story Of Kampili: A Phoenix That Burnt Itself To Ashes So That Vijayanagara Could Rise 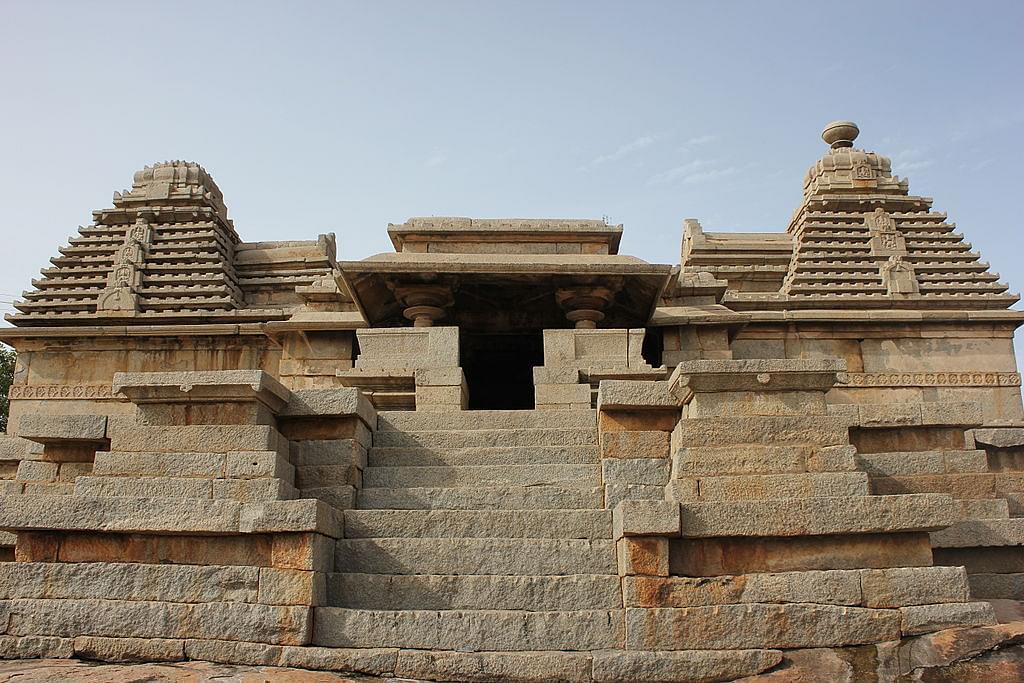 The Shiva temple on Hemakuta hill in Hampi built by Kampili Raya, ruler of the Kampili Kingdom.

The early 14th century was a time of great political turmoil in southern India. The last great Hindu dynasties of the Hoysalas and the Kakatiyas had been snuffed out by repeated invasions of the Delhi Sultanate from the north while the great Vijayanagara kingdom was yet to rise. Historians often view this period as one of unchecked expansion of the sultanate during which it rolled down the Indian subcontinent like an all-conquering juggernaut.

There were, however, pockets of stiff resistance that the sultanate had to overcome. These conflicts often took the form of a David vs Goliath struggle between the much larger sultanate and the smaller Hindu state. It made little political sense for the smaller states to go to war with the sultanate when mere acceptance of sovereignty and payment of tribute were enough for survival. Despite this, we witnessed numerous instances of what can only be described as wars of honour, where all was staked and all was lost for the sake of honour. A serious historian is trained to sift through hyperbole and superlatives to look for the dry facts of history. However, there are times when admiration for the deeds of men and women who lived centuries ago seeps through the wall of indifference cultivated by the professional historian.

The story of Kampili is one such instance.

Kampili was a short lived kingdom by mediaeval standards – lasting a little over 40 years. It was founded by Mummadi Singa or Mummadi Singeya Nayaka sometime around 1290 C.E. Not much is known about Mummadi Singa except that he was a commander in the service of the Yadava king of Deogiri, Rama Deva Raya who fought in that kingdom’s several battles with Alauddin Khilji that weakened the Yadava kingdom and eventually led to its annexation by the Delhi Sultanate.

Mummadi Singa appears to have left the service of the Yadava kingdom sometime towards the end of the 13th century and established his own kingdom on the banks of the Tungabhadra river near the historic city of Anegundi, some 20 km from Hampi, in Bellary district of modern day Karnataka. From here Mummadi Singa consolidated his kingdom swiftly, conquering the major fortresses and commercial centres of the region in quick succession. Raidurg, Badami and Raichur all fell rapidly, swelling the king’s possessions and his count of followers. It was around this time that historians such as Burton Stein believe that the Sangama brothers, Bukka, Harihara and the others - who were later to found the Vijayanagara Empire - entered the service of the king of Kampili.

That same year in faraway Delhi, Muhammad bin Tughlaq succeeded his father Ghiyasuddin Tughlaq as the second emperor of the Tughlaq dynasty and master of territories ranging from Peshawar to Patna. Under Muhammad bin Tughlaq, the Delhi Sultanate was to reach its zenith, witnessing its greatest territorial expansion covering most of Indian sub-continent. Tughlaq was, however, also known to be exceptionally cruel even by mediaeval Turkic standards, and fond of concocting grand schemes of world domination that often ended in disaster. For his barbaric, heart rending cruelty, and his ambition bordering on delusion, Tughlaq has often been called the Caligula of India, after the first century Roman emperor known to be one of the worst tyrants in history.

The Rebellion Of Bahauddin Gurshasp

As was often the case, soon after the sultan’s coronation, rebellion broke out in the sultanate. Bahauddin Gurshasp, a cousin of the sultan and governor of the Deccan rebelled from his base in Sagar, Madhya Pradesh. Described by historians as noble, kind, and learned, Gurshasp was the antithesis of the cruel and ambitious Tughlaq. In some ways, the rivalry between Tughlaq and Gurshasp mirrors that between Aurangzeb and Dara Shikoh of 3 centuries later. Dara Shikoh was eventually defeated by Arurangzeb and his severed head sent to their incarcerated father, Shah Jahan on a plate. The fate of Gurshasp, however, was not to be so kind, for Tughlaq’s love for the macabre made even Aurangzeb look like a gentleman.

After raising the standard of revolt, Gurshasp fled southwards, hoping to raise support from the Hindu kings of peninsular India. However by this time no strong power remained that could challenge the sultan’s army and Gurshasp, facing one defeat after another, sought refuge with Kampili Deva Raya whose fame had by now crossed the Deccan. At Kampili, Gurshasp was welcomed and promised that no harm would come to him as long as the Raya of Kampili lived.

In hot pursuit of his rebellious cousin, Tughlaq crossed the Vindhyas and made Deogiri, the erstwhile capital of the Yadavasin and present day Maharashtra, his base of operations in southern India, renaming it Daulatabad. (He would soon force the entire population of Delhi to shift here)

Death Before Dishonour – The Jauhar Of Kampili

Thus it was that in 1327, the tiny kingdom of Kampili, ranging over a few districts in modern day Karnataka, found itself standing all alone against the might of the Tughlaq Sultanate that extended over roughly half of South Asia. Tughlaq demanded Gurshasp from the Raya of Kampili. The Raya replied that he had sworn to protect Gurshasp with his life and was willing to fight unto death for his word.

The war between the kingdom of Kampili and the Tughlaq empire lasted over a year during which three expeditions were sent by the sultan against Anegundi. The first two were successfully repulsed. However, in the third, the sultanate army succeeded in breaking through the defences of Kampili, leaving the warriors besieged in the fortress of Anegundi, outnumbered and outgunned.

When even the defence of Anegundi became untenable, Kampili Deva Raya knew that the end was near. However even in the face of certain defeat, death, or even worse - given the notorious reputation of Muhammad Tughlaq for the most horrific forms of torture - the Raya was not willing to compromise with his honour. He had promised to shelter Bahauddin Gurshasp even at the cost of his life, and he intended to live up to his word. From Anegundi he arranged to have Gurshasp smuggled to the Hoysala capital of Dwarasamudra where a greatly weakened Veer Ballala 3rd still held some semblance of control. A letter of commendation from Kampili Deva Raya was enough for Gurshasp to be welcomed into the court of the ageing Veer Ballala 3rd.

Having ensured Gurshasp’s safety, Kampili Deva Raya retreated to another fortress nearby mentioned in various sources as ‘Crynamata’. Here, he gathered together 5,000 of his best men and informed them of his decision to not surrender to the enemy. According to the Portuguese historians, Domingo Paes and FernaoNuniz who wrote an account of the Vijayanagara kingdom in the 16th century, a funeral pyre was then lit into which jumped all the women and children of the assembled warriors. Finally the gates of the besieged fortress were opened and the warriors of the kingdom of Kampili fell upon their besiegers, embracing death with swords in their hands than surrendering to the enemy.

Historians agree that while the Kampili warriors were killed almost to a man, the sultanate army took some young princes as hostages back to Delhi. These princes were converted to Islam, but were otherwise treated with honour, owing to the bravery and noble conduct of Kampili Deva Raya that had left a deep impression even on Muhammad bin Tughlaq. However, the exact identity of these princes is a matter of dispute among historians. While some sources claim that these princes were the sons of Kampili Deva Raya himself, others, including Burton Stein and K A Nilakanta Shastri claim that these princes were the five Sangama brothers – Bukka, Harihara and the others who were soon to found the Vijayanagara kingdom.(Gilmartin : 300)

Either way, what is undisputed is that these princes managed to escape back to the south, apostatising from Islam, reverting to the religion of their birth, and entered the service of Veer Ballala -3rd who was by now an ageing monarch nearing 80, and whose kingdom was threatened by the Madurai Sultanate from the south and the Delhi Sultanate from the north. When the last embers of the Hoysala empire were finally extinguished in 1343 at the hands of the Madurai Sultanate, the Vijayanagara kingdom arose from the ashes, built by these princes of the Kampili kingdom who had fought in the service of Kampili Deva Raya. The fortress city of Anegundi - which had witnessed the brave final stand of the Raya of Kampili and his 5,000 warriors, along with the jauhar of their women and children - would become the first capital of Vijayanagara.

The Portuguese chroniclers Paes and Nunizmention that after their escape from Delhi, the Kampili princes cremated the body of the king Kampili Deva Raya with full ceremonial honour that was due to him, and from that moment on, Anegundi became the place where future kings of Vijayanagara were buried while Kampili Deva Raya came to be worshipped as a saint. (Nuniz : 295)

As for the fate of Bahauddin Gurshasp, it is best described by Wolseley Haig, author of the Cambridge History of India Vol 3. After the jauhar of Kampili, Tughlaq’s forces fell on Dwarasamudra and captured Gurshasp from the protection of Veer Ballala 3rd.  Gurshasp was then brought back to Delhi where he was flayed alive. His skin was stuffed with straw and put on display at the centre of the city as a dire warning to anybody getting anymore adventurous ideas in their heads. The flesh of Bahauddin Gurshasp was cooked with rice and fed to his unsuspecting wife and children on the pretext of a celebratory feast. (Haig : 133)

In the political whirlpool that was 14th century peninsular India, Kampili was like a spark that lit the darkness and gave birth to something far greater than itself. In a way, Kampili was like a phoenix that burnt itself to ashes so that Vijayanagara could be born.