The Tragic Life of Victoria Gowramma: How Victorian Monarchy Tried To Evangelise India Through An Unwilling Princess Of Coorg 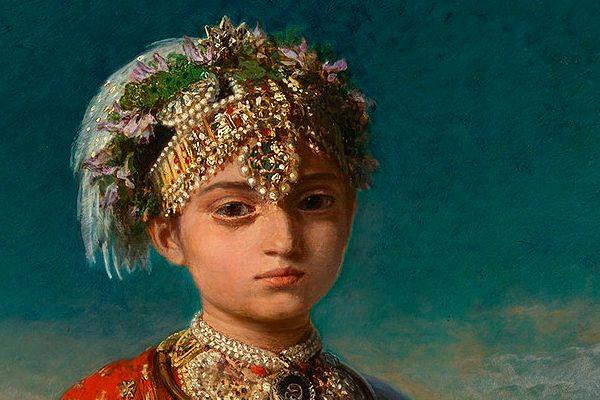 Princess Gouramma depicted in Indian dress and rich jewellery, leaning on an Indian table. She is holding a Bible, an allusion to her conversion to Christianity. (Franz Xaver Winterhalter)

Meghan Markle and Prince Harry’s recent interview with Oprah Winfrey has brought to fore the tumultuous relationship the British monarchy has with all things concerning race. Markle alleged that a member of the royal family had expressed concerns over how dark their baby Archie's skin would be.

Notably, the Duchess of Sussex is not the first person of colour to be subjected to royal racism.

The institution's colonial past is filled with instances of the ‘firm’ ( as Markle calls it) taking upon itself the duty of civilising the ‘coloured’ citizens of the colonies it conquered.

In this regard, the remarkable life of Princess Gowramma, the Princess of Coorg and the goddaughter of Queen Victoria, provides interesting insights into the treatment of people of colour by the imperial echelons of the nineteenth century British society.

Princess Gowramma was born in Banaras, to the deposed king of Coorg — Chikka Veerarajendra Wodeyar, who had been exiled by the British in 1834.

She was the Raja's favourite daughter and was thus his natural choice when it came to accompanying him on his journey to England, where he intended to demand in court the return of his wealth from the East India Company.

Some sources claim that Veerarajendra conveyed his intent of converting Gowramma to Christianity to gain the good graces of the company, so as to receive permission to travel to England.

Governor General Lord Dalhousie and other directors of the company found the idea of voluntary conversion by an Indian royal quite appealing, especially since it would help improve their sagging image in Britain.

Thus, in 1852, after Gowramma had received an education in Christian mannerisms and scripture, she and her father set sail to become the first Indian royals to ever set foot in England.

Upon reaching the island, the 11-year-old Gowramma was presented to Queen Victoria. The Queen, quite taken by the princess declared that she would become the godmother and even endowed Gowramma with her own name — ‘Victoria’.

The Princess of Coorg was then baptised by the Archbishop of Canterbury, at a private chapel in the Buckingham Palace, in the presence of Queen Victoria, her family, senior officials of the government and directors of the company.

Post the baptism, the Queen gifted Victoria Gowramma a bound and autographed Bible with gold embellishments. She then entrusted the princess to the care of Major and Mrs Drummond, who were to groom her with Western thought and education.

Queen Victoria took great initiative in expanding Gowramma’s social circles. She would invite Gowramma to regularly interact with her children and also bestowed upon her a title that made her equivalent to European princesses.

However, Gowramma, who was made to abandon her traditional Indian clothing for Western wear was depressed. She was cut off from all connection with her father and was instead forced to talk, dress and behave like a British aristocrat.

Unable to cope with the pressures of high society, Gowramma tried running away multiple times. She often expressed her desire for privacy and even stated that she rather live like a servant with the handmaidens than suffer the compulsions of regal life. Her troubles were dismissed by the Queen and her consort Prince Albert as ‘innate oriental weakness’ that seeks to escape civilisation.

Meanwhile, back home in India, the British had defeated Maharaja Ranjit Singh to annex Punjab. They then took his minor son, Duleep Singh, under their care.

Exiled to Fatehpur and kept away from Lahore so as to avoid chances of revolt, Duleep Singh was subjected to a Western education that eventually culminated with his acceptance of Christianity out of his own ‘free’ will. He then set sail to Britain in order to formalise his conversion under the Church of England.

The Queen, to whom Duleep Singh presented the Kohinoor Diamond, took an instant liking of the Maharaja and became his godmother. She and Prince Albert in cahoots with the company plotted an alliance between Singh and Gowramma.

The hope was to use the influence generated by the marriage between two Christian Indian royals as a tool for proselytising the Indian population. This idea also had the endorsement of Singh’s English guardians — the Logins. They were firm believers in the European responsibility of spreading the word of the Bible amongst the pagan worshippers of India.

However, upon introduction, Singh was lukewarm in his response to Gowramma. He made it known to the Logins that he considered the princess more an honorary sister than a potential wife.

Gowramma, who had earlier been forgiven by the Queen for her torrid affair with a stable boy and her attempted elopement with an under-butler decided instead to marry a close friend of Singh — Lieutenant Colonel John Campbell, who had served in Bellary and was 30 years her senior.

Meanwhile, Chikka Veerajendra, who had lost a seven-year-long legal battle with the company had died.

Gowramma gave birth to a daughter named Edith Campbell on 2 July 1861. By the time Edith was three years old, Gowramma had developed signs of tuberculosis.

She died from the disease on 30 March 1864 just a few months short of her 23rd birthday.

Lieutenant Campbell, who in their short marriage had either neglected his wife or had persistently pestered her for money, disappeared after her death along with the crown jewels of Coorg that had been in her possession.

It is believed that he had only married the princess for her 1,000 pound allowance, the Queen’s favour and of course the jewels of Coorg.

The tragic life of Victoria Gowramma, a princess who had been alienated from her own land and language, was perhaps the paradigm the Britain had for the citizens of her colonies to follow.

Had Duleep Singh and Gowramma not fell short of the royal scheme envisioned by Queen Victoria, they might have had a significant role in shifting India's religious history.

After all, colonial rulers did find religious conversion a greater instrument for the control of the colonised than plain force.

Gowramma today serves as a reminder of the potential detachment and loss of identity a fiercely Western education can ensure.

Victoria Gowramma was buried in the Brompton Cemetery, her tombstone bears the epithet composed by Queen Victoria, it contains the poignant words — “Other sheep I have, which are not of this fold" (John X,16).