The Wars That Were Won: Chandragupta Maurya’s Victory Over Seleucus I Nicator 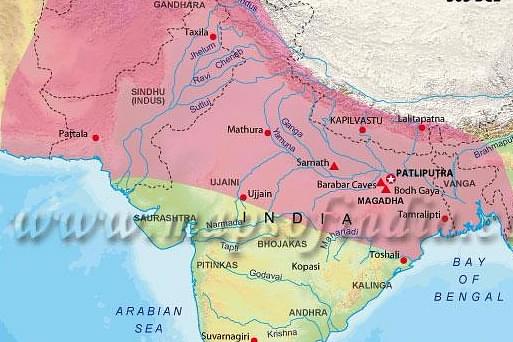 Our history books and mainstream narratives are filled with vivid descriptions of battles in which Indic forces have suffered defeats. This is an attempt to look at the numerous instances in our history where Indic forces were victorious – a narrative which has sadly been suppressed from most Indians by Leftist historians.

Chandragupta Maurya, the founder of the Maurya Empire, was undoubtedly one of the Indian sub-continents greatest monarchs.

Not much is known about Chandragupta’s family ancestry but where most historians concur is that he was not born into considerable power and his rise to prominence began when he came under the tutorship of the legendary philosopher Chanakya, who took a young Chandragupta from his birthplace of Magadha (southern Bihar) to the Takshashila (north-west Pakisthan) and tutored him for around 8 years.

With Chanakya architecting his military and political strategies, Chandragupta initially established his rule in regions around Magadha (southern-Bihar) by 321 BCE and then looked towards expanding his dominance over the Nanda Empire. The Nanda Empire was – at the time – the dominant power in the subcontinent. The legends of its military capabilities were so awe-inspiring that it had forced a mutiny within the army of Alexander the Great when his soldiers fearfully refused to engage the Nandas in battle, forcing Alexander to retreat from the Indian sub-continent.

What followed was a bitter war of around a decade which ended with Chandragupta Maurya – guided by the strategies of Chanakya – defeating the Nandas and assuming control of the Nanda capital, Pataliputra. By 312 BC, having established is rule over most of north and north-west India, Chandragupta Maurya began to look further west towards the regions which had been conquered by Alexander of Macedonia.

Seleucus I Nicator was a member of the infamous Diadochi – a group of Alexander the Great’s generals and friends who battled of the control of his empire after his death in 323 BC.

Post the death of Alexander, Seleucus was one of the most powerful participants in the War of the Diadochi and managed to wrest control of the eastern territories of Alexander which also included regions in the Indus Valley.

After having established his dominance in the east, Seleucus engaged his major rival amongst the Diadochi, Antigonus, in the Babylonian War. The war ended in a decisive victory for Seleucus and Antigonus was forced to retreat westwards.

Soon after Seleucus, following the tradition of Greek kings founding cities in their names, constructed the city of Seleucia (within present day Iraq) and proclaimed himself king of the regions he controlled.

His numerous military victories over his rivals also earned him the epithet Seleucus the Victor amongst the Greeks and his subjects.

With his rule over northern India secure, Chandragupta and Chanakya saw the sudden death of Alexander and the disarray amongst his generals as on opportunity to expand their rule towards the west.

Alexander had left his Prefects in control of the regions he had conquered in the Indus Valley. Chandragupta is said to have taken control over the areas governed by four such Prefects – Nicanor, Phillip, Eudemus and Peithon, resulting in Mauryan control being established until the banks of the Indus River. Chandragupta’s conquest of these regions and his military prowess is vividly described by the Roman historian Marcus Junianus Justinus who went onto claim that the Mauryan king was even revered by ‘wild lions and elephants’.

News of Chandragupta’s western forays reached the ears of Seleucius, who decided that he needed to secure his eastern flank and thus began the Mauryan-Seleucid War.

The war is estimated to have begun in 305 BC, with Seleucius crossing the Indus and engaging Chandragupta’s forces in the Gandhara (north-west Pakisthan) region.

While no accounts of the actual battled fought exist today, the historical consensus is that Chandragupta Maurya emerged victorious against the Greek forces. Post the battle, Chandragupta continued control over all the regions he had conquered previously. Seleucius also ceded to Chandragupta his territories in Arachosia (Kandahar), Gedrosia (Balochisthan) and Gandhara. Around the same time, Chandragupta is said to have taken over the Hindu Kush, eastern Iran, Punjab and east Afghanistan – greatly growing his empire and expanding his victory of Seleucius to establish his dominance from modern-day Afghanistan to Bihar.

The Roman historian Appian of Alexandria also suggests that the terms of terms of peace negotiated by Seleucus with Chandragupta went beyond the ceding of Greek territories to the Indian monarch. Seleucus is also speculated to have married off his daughter to Chandragupta while receiving 500 war elephants in return - either as a gift or dowry.

Seleucus would put the 500 elephants he received from Chandragupta to good use soon after. The beasts were said to have played a decisive role in Seleucus’ final battle with his great rival Antigonos in the Battle of Ipsus. In the battle Seleucus inflicted a final defeat onto Antigonos and then added Antigonos’ regions into his own empire. With this victory, Seleucus was able to found what came to be known as the Seleucid Empire which ruled over large parts of the Mediterranean and the Middle East until its collapse in 63 BC.

Chandragupta Maurya, of course, had already established the Mauryan Empire by the time he came into conflict with Seleucus. Nevertheless, his victory in the Mauryan-Seleucid War and his tremendous expansions towards the west lifted him to exalted status in the region. He would soon turn his focus towards the south beyond the Vindhyas and into the Deccan. At the zenith of his reign, Chandragupta is said to have ruled over most of the Indian sub-continent.

Chandragupta’s legacy went beyond his military conquests as well.

The Mauryan Empire, which he founded from next to nothing, became one of the largest empires in the world at the time. Under the guidance of Chanakya – unquestionably one of the greatest philosophers of all time – Chandragupta implemented administrative systems which allowed trade and agriculture to flourish under his rule, starting off a period of great economic activity in the Indian subcontinent. Chanakya’s mastery of economics, finance, defense and statecraft also enabled Chandragupta to ensure peace, prosperity and security for his citizens under his rule. This was also a time when the region enjoyed great religious peace and harmony along with flourishing art and culture. More importantly, the systems and structures which Chandragupta put in place lived beyond him – allowing his successors Bhindusara and Ashoka to build on his achievements and take the Mauryan kingdom to greater heights.

Unfortunately, this great conquest of Chandragupta - and those of others like him – are almost forgotten today. An intellectual project, spearheaded by Leftist academia, ‘rationalised’ out the great achievements and victories of Indic monarchs and generals from our textbooks and consequently, from the minds of our people.

However, for India to truly become the power that it deserves to be, it is important for its citizens to remember its real history and to truly appreciate the greatness of some of its successes.