To Fight Love Jihad, Women Must Be Informed What Happens To Their Rights In A Sharia Marriage 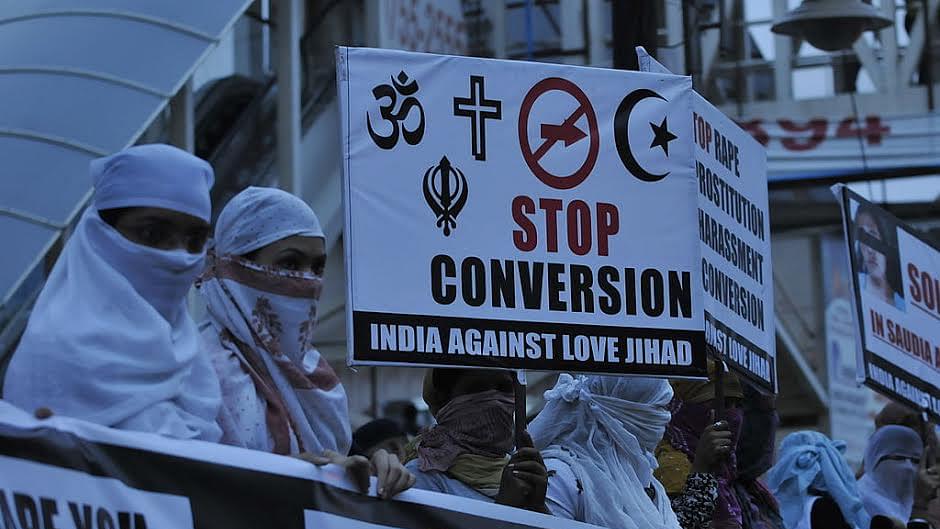 There is a commotion right now on Indian social media following the "love jihad case" in Kerala. According to a recent report, in the Economic Times, the Supreme Court of India has ordered the National Investigation Agency (NIA) to investigate the case.

Some folks dismiss the whole thing as laughable and others consider it to be a criminal act. Here is my take on the matter.

What On Earth Is “Love Jihad”?

Any random 'Muslim – non-Muslim' love affair or marriage is not Love Jihad.

1) an element of deception

3) there is alleged conversion to Islam

In addition to the above three, there is sometimes, but not always an alleged conspiracy angle. The charge is that a group of religious leaders sponsor young men with leisure, money, accessories, and training to fall in “love” with unsuspecting Hindu or Christian girls and get them to convert.

Two Parallel Legal Systems And The Contract Of Marriage

India has a unique system of personal law. Muslims are allowed to “register” (in a sense) their union under the Sharia Law and Hindus under the Hindu Marriage Act.

There is also a “Special Marriage Act” popularly known as register marriage which couples from any religion can use.

For simplicity, I am omitting Christians/ Sikhs etc – even though Christians in Kerala have been complaining about Love Jihad.

Irrespective of the route used, the act of marriage should be viewed as a legal contract to distinguish it from just cohabiting. Furthermore, as with any contract, a marriage contract bestows both husband and wife with rights and duties.

In the Hindu and Special Marriage Act, the rights and responsibilities of the husband and wife are more or less equivalent.

As per the Sharia Law, they are not. The rights of the wife are dramatically lower in the latter. In a grand compromise, our secular state has created two parallel systems. This was done to chicken out of a tough judicial and political situation like most of the Idea of India laws. But nothing is free.

Given the two legal systems, one of which has dramatically reduced rights of the wife – the conflict moves to the interface between the two.

You may notice that instances of love jihad always involves a non-Muslim girl crossing over. On paper, a Hindu man marrying a Muslim girl can convert and acquire enhanced rights vis-a-vis the girl. This appears to be uncommon as the Muslim girl who is about to marry outside would seek parity and opt for the register marriage.

A lot of people are pointing out the “forced conversion” angle. That is not the main point in my view.

Under Sharia Law, both the man and woman have to be Muslims. So the real issue is that in all cases of love jihad – the man is forcing the girl to get married under the Sharia Law instead of the Special Marriage Act. The conversion is just a formal requirement – there just can't be a Nikah (i.e. the Maulvi will refuse to conduct it) unless both the participants are Muslim.

So you may rightfully ask. What's the big deal? If the girl willingly marries – what difference does it make to anyone what law that is used to solemnise it?

Here Is The Issue In My View

When a Hindu girl gets married under Sharia Law, she gives up her existing rights. So even if she consented – was it an informed consent in the sense that she voluntarily surrendered her rights?

The girls that usually show up in love jihad stories don't seem to be of the type that would know what rights they had to begin with. I don’t have any proof, but I guess a lot of these young girls would be just thinking that the marriage ceremony is done following Muslim customs while they retain all their rights.

They agree to go through the marriage routine then discover that the guy is already married or is getting ready to marry another girl. Pregnancy and childbirth complicate things further because simply walking out is easier said than done under these circumstances.

This is a common thread to all these stories. Therefore, the “deception” part of Love Jihad seems to related to the loss of rights.

Banning cross religious marriages would be ludicrous. I am not even remotely suggesting such a thing. But to work around this issue of rights, I propose the following.

Hindu girls marrying under Sharia (after converting of course) must be either required to sign or at least informed about exactly the rights they are losing. I prefer the waiver form to be direct so that these rural girls understand whats going on. Something of the kind: Do you agree to waive your right that your husband does not need your consent if he wants to marry again? Do you agree to waive your right to divorce procedure? etc.

There are plenty of Hindu girls who marry Muslims and lead happy lives out of love and out of their own informed choice. This post isn't about them.

It is evident that this is not a zero-sum game. An act of love jihad does result in a net loss of rights. Therefore we have to put up checks to ensure that information about the loss of rights is readily available to these women before they make the biggest decision of their lives.

This article was published on Reality Check India and has been republished here with permission.