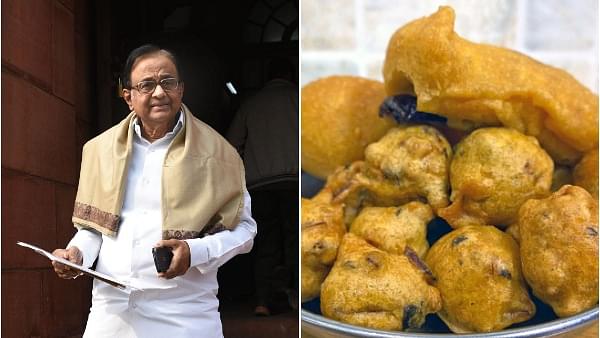 We are a land that always believed in sahasranamas. At least a thousand words - to describe not just our gods.

For example, in English, it’s just one word. Moon. But we have at least 20 names and words for it. From Amalendu to Sudhakar. Covering its every mood, each stage of waxing and waning to its full blown glory and then, its velvety-dark, mysterious absence. We even have a name for Lord Shiva to honour its sickle presence in his dreadlocks. Shashidhara.

And as inadequate as moon is the word “fritters”.

Because it dares to – and fails miserably, of course – describe what is actually a galaxy of galaxies of what happens when batter meets hot oil.

Pakora (Batter embracing everything from bread to palak to paneer to fish).

Bajji (That’s how we Southies like to call it and so smitten are we, that in Karnataka, we have grown ourselves a chilli specially designed for bajji making.)

Vada (From Batata to Maddur to Mumbai, where it’s often seen wrapped in the arms of a pav, sporting fried green chillies.)

In other words, it is said that an Indian is someone who can make a pakora out of anything. Or a bajji. Or a vada. Or a bonda....you get my drift.

No food historian has vouched for this, but methinks it all started on a rainy afternoon. (Some would argue, no, it was a winter afternoon but since winter is as alien as snow in many parts of India - nah. Rainy afternoon, it was.) As the rain clouds dripped a grey, soggy dampness over everything and as the first pakoda-vada-bonda-samosa maker moodily splashed through another muddy puddle, he/she had an epiphany. A vision of things being dipped in batter, then being gently slipped into a bubbling cauldron of hot oil and emerging as hot crunchy, golden brown morsel-mermaids, dancing at the edge of a slotted spoon, shaking off the oil like water from a girl’s hair...

And the first pakoras were born. Or pakvavata, as they called it then, since these were times when people were wont to natter in Sanskrit. And since then, for hundreds of hundreds of years, we have crunched our ways happily through hundreds of millions of kilos of these little packets of fried heaven.

Some made at home.

But many, many, and now increasingly with more and more people living in cities and having less and less time to cook, many, many, many, many made at the little roadside shop/stall/shack/handcart of your favourite pakora-vada pav-bonda-bajji wallah.

Which means that it is the time to ask the question that the very erudite, very Harvard-educated, very ex-finance minister, very probably-never-eaten-a-roadside-pakora-or-vada Mr P Chidambaram wants us to ask.

Is selling pakoras at the nearest nukkad a job? As in the type that gets you PF/LTA/DA/pension/medical/gratuity/quarters/maternity leave etc.? And a watch or a Tanjore plate when you retire 35 years later? And that would command a fairly decent dowry?

Is it a job that you should seriously consider as a career option after you complete your BA/BSc/MBA/Ph.D/Whatnot?

And is it a job as in “Mera beta bade ho kar pakoda wallah banega.”?

But, by that count, no parent dreams that their kid will grow up and become a typist. Or a bus conductor. Or a peon. Or a sanitation worker. Or a waiter. Or a bank clerk. Or a coolie. Yet, in Mr Chidabaram’s book of definitions, these are all jobs. And if the Modi government had created 50,000 jobs in each of these categories, Mr Chidabaram would have grudgingly conceded that it had kept its promise of job generation.(Or maybe not.)

My point is this.

There are jobs and there are jobs. And most of them are not your average BA/BSc/MBA/Ph.D/Whatnot’s dream job. Yet he/she takes the job because life has to go on, you have to marry and have kids and these jobs offer some sort of – however paltry – economic security. (Even if, economically speaking, most of these job wallahs will retire more or less where they were when they started.) Plus, “respectability” is a big thing for the average Indian and a typist, or a bus conductor or a bank clerk are respectable jobs. (The jury is still out on waiter/ sanitation worker and coolie.) And no, being splattered with hot oil and coming home smelling strongly of sweat-garlic-chutney-and-fried onion is not something you would associate with “respectable”. (“Ladka kya karta hai? Ji, Chandni Chowk mein uski pakore ki redi hai...”)

So, as much as it made us cringe, we know where Mr PC came from when he made that pakora-seller-beggar remark.

Firstly, selling pakoras, even on the street - is an honest day’s work and begging is when you get money for doing no work. So pakora wallahs don’t qualify, but many politicians do.

Second of all – and Mr PC, the Harvard-educated economist would understand this – with the average Indian so partial to his/her regular fix of pakora/vada-pav/bonda/bhajiya and there being at least a few million Indians buying and munching them at any given point in time, pakora (and the rest of the biradari) sales must be a source of a very decent amount of income generation. (Why don’t statisticians have a pakora clock, I ask you, counting number of pakoras eaten every second. I mean we’re bored with the babies-born-every-second clock. We know we make a lot of babies but we also make and eat a lot of pakoras.)

That is why, even the United Nation’s Food and Agriculture Organization (FAO) has acknowledged that street food is one of the vital income generators in urban economies of countries like India

Street food micro-industries are vital for the economic planning and development of many towns. The contribution of street food vendors to the economies of developing countries has been vastly underestimated and neglected.

And I wonder if Mr Chidabaram knows that India is one of very few countries that have developed a National Policy on Urban Street Vendors. Adopted in 2004, it aims to ensure that these vendors (pakora wallahs being one of them), find recognition for their contribution to society.

Like Singapore did. Ranked fifth on the UN Human Development Index and with the world’s third highest gross domestic product (GDP) per capita, Singapore’s street food is considered such an important part of, not just its economy but also its culture that in 1971, six years after independence from Malaysia, the government set up hawker (an ugly word everywhere but in Singapore) centres all over the city with piped water, sewers, and garbage disposal facilities. And Singapore is not just a hotspot in the global street food tourism (one of Forbes’ magazine’s 10 best street food cities; Mumbai figures in the CNN’s 23), but even Michelin was forced to wake up in 2016 and award two of Singapore’s “hawker” stalls a single star each!

Third of all, as far as I know, not a single typist, factory worker, bank clerk or bus conductor has ever ended up a billionaire. Or even a millionaire. (Unless they quit their jobs, like Rajnikant did.) But there is a Mumbai roadside kulfi-and-chaat seller who arrives to work in a Mercedes Benz. Dolraj Ghaire, Bhopal’s Cycle Soupwala, started off by selling soup on a bicycle, 5 rupees for a cup, take your pick from tomato, sweet corn or manchow. Today, he owns a chain of seven fast food joints with an annual turnover of crores. And an Indian in London, sacked from his cushy, as-described-by-Mr Chidambaram-job, set up a vada pav joint (not at a street side, I will grant you, but they were renting space inside a failing Polish ice cream shop which is almost the same thing) with his college mate. Seven years later, they have 35 employees, 3 branches and an annual turnover of over Rs 4 crore. Just the tip of the roadside-pakora-wallah-to-riches chronicles

So, dear Mr Chidambaram, we don’t care what you call selling pakoras.

And we love our pakora wallahs.

And our vada-pav wallahs.

Because, no matter how hard we try, we can’t stop eating the golden, crunchy-hot morsels that tumble out of their big, greasy, black, bubbling kadais. And so, we are going to continue eating them by the tonne and while I can’t swear about the aloo in the samosa, as long as there are Indians and India, there will be a pakora wallahas at every nukkad. We only hope Mr Modi and his government will give them their just, respectable and honourable, not to mention clean and piped-watered, place in society. (And maybe even EPF and DA).

Finally, dear Mr Chidambaram, I too have a dream. We have a chai-wallah as our Prime Minister. How about a Michelin star for one of our pakora-wallahs?