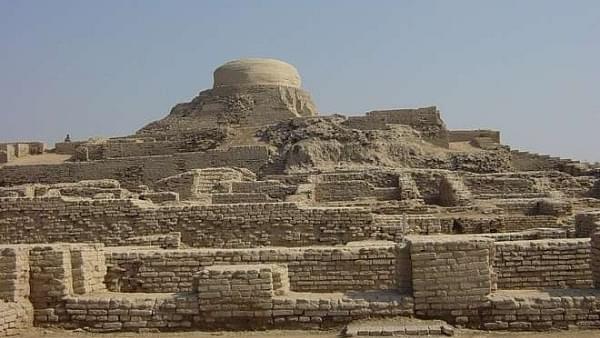 Archaeological ruins at Mohenjo-daro, one of the largest settlements of the Indus Valley civilisation. (UNESCO/Wikipedia)

In the 1850s, Max Müller - a German orientalist who lived in Britain most of his life - introduced the notion of an Aryan race that invaded and conquered India from Central Asia in antiquity and brought with it Hinduism and the Sanskrit language.

In the late 19th century, the British "race scientist" Herbert Risley introduced the idea that the people of South India are a separate race - Dravidians - based primarily on perceived differences in skin colour and language, and on the ratio of the width of a nose to its height. He also categorised the people of India into seven castes.

Then, in the 1920s, the great metropolises of Harappa and Mohenjo Daro were discovered and excavated by the British. Evidence of other settlements was also found. They called this the Indus Valley Civilisation (IVC). In light of this discovery, colonial historians declared that the IVC was a Dravidian civilisation, which was destroyed by the invading Aryans.

These ideas were the genesis of the Aryan Invasion Theory (AIT), which is the foundation upon which the whole of Indian history has been written. Its central thesis has three main components:

Two, India was invaded and conquered from the West by a nomadic people called the Indo-Aryans around 1500 BCE. These Indo-Aryans were of European origin (hence white-skinned); and spoke Vedic Sanskrit. They destroyed the indigenous Dravidian civilisation, subjugated the natives, and forced them to migrate to India’s south.

Three, the Indo-Aryans then composed the Vedas, and imposed Hinduism and the caste system upon the Dravidians and other indigenous peoples of India.

The AIT was further modified in the 20th century. The newer iteration of the theory is called the Indo-Aryan Migration Theory. It posits that the Aryans migrated into India rather than invaded it.

After Independence, despite a de-facto moratorium on historical research in India's universities, striking archaeological evidence began to emerge that many of the traditions and customs prevalent in the IVC continue to exist in modern India. Unmistakable evidence emerged that the mighty river Sarasvati mentioned extensively in ancient Indian texts did indeed exist, and that the Rig Veda, India's foundational literary text, was composed closer to c. 5,000 BCE when the Sarasvati was last in its prime, than to c. 1,500 BCE, when the Aryans are supposed to have conquered India.

In short, there exists voluminous archaeological, literary, and linguistic evidence that consistently and repeatedly demonstrates that "Vedic" and "Harappan" are respectively literary and material facets of the same civilisation. Furthermore, there exists literary as well as archaeological evidence that Sanskrit-speaking Indians migrated out of India into lands thousands of kilometres west of it.

In the 21st century, advances in the science of genetics started giving researchers an unprecedented ability to uncover the details of humanity’s past. Studies have shown that the genetic lineage (haplogroup) associated with the Indo-European languages originated in India 15,450 to 18,000 years ago.

For a summary of the archaeological, literary, linguistic, and genetic evidence available until May 2017, please refer to this article.

A new study appeared recently, which documents population dynamics in Central and South Asia in the 3rd and 2nd millennia BCE. It was co-directed by David Reich of Harvard Medical School. It was quickly followed by the publication of two opinion pieces - one by Tony Joseph in the Quint, and the other by a mysterious, anonymous author in the Economist, both claiming that the study's results support and confirm the Aryan invasion/migration theory.

Joseph is well known for his advocacy of the theory; I have in the past debunked his attempt to "settle" the Aryan invasion debate. The article in the Economist has a vindictive, gloating tone, it proclaims that the "treasured" "Out of India" theory has been "squelched"; and goes on to announce that the Aryans did not come from India; they conquered it.

An analysis of Reich et al.'s study reveals that these conclusions are incorrect.

The study analysed DNA from 612 ancient individuals, including 65 ancient South Asian individuals from the Swat Valley in present-day northern Pakistan (1200 BCE – 1 CE). The data was co-analysed with genome-wide data from present-day individuals, 1,789 of which were from 246 ethnographically-distinct groups in South Asia.

The study finds evidence between 3100-2200 BCE, in Turkmenistan and Iran, of population groups that have Indian ancestry. It hypothesises that these Indian-ancestry individuals were recent migrants from the IVC. In other words, this is evidence of westward migration of Indians. The study also finds evidence of Indian ancestry in individuals living in the Bactria–Margiana Archaeological Complex (BMAC) between 2300 -1400 BCE.

Reich et al. find that migrants from the Central Asian Steppe integrated into the Indian population along the northern fringe of the Indus Valley Civilisation (IVC), in Swat Valley (present-day Pakistan), between 1200 BCE -1 CE. This mixed population is genetically similar to present-day people of Swat Valley. They call this the "Indus periphery" group.

They estimate that Iranian ancestry must have reached the Indus Valley by the 4th millennium BCE. They find that Indus periphery related people are the single most important source of ancestry in South Asia today, with significant contributions to North Indian as well as South Indian population groups.

In short, the study confirms that there were migrations of people with Iranian as well as Central Asian Steppe ancestry into India at various times between the 4th and the 2nd millennium BCE.

At first glance, this appears to be game, set, and match in favour of the AIT. There is proof of migrations into India, after all, from Iran and Central Asia, and that too around the 2nd millennium BCE, when the IVC is known to have declined.

However, there is more to this than meets the eye. Let us examine what is missing from Reich et al.'s study.

First, and most importantly, Reich et al. did not have access to ancient Harappan (IVC) DNA. Without this crucial evidence, the study is unable to reach any definitive conclusion about the origin of the people of the IVC.

The paper explicitly states that,

Without ancient DNA from individuals buried in IVC cultural contexts, we cannot rule out the possibility that the group represented by these outlier individuals, which we call Indus_Periphery, was limited to the northern fringe and not representative of the ancestry of the entire Indus Valley Civilization population.

The study is therefore unable to find any evidence that the people of the IVC were "Dravidians" or AASI (Ancient Ancestral South Indians).

Second, it is beyond the study's scope to determine the language and the culture of the IVC.

Third, the study does not in any way invalidate the results of previous studies which have shown that the genetic lineage (haplogroup) associated with the Indo-European languages originated in India 15,450 to 18,000 years ago.

Fourth, Reich et al. make no mention of the term ‘Aryan’, and merely speculate that migrants from the Steppe may have brought Vedic culture into India. This is mere speculation; the study does not furnish any evidence that would support such a hypothesis. It therefore fails to establish any evidence of the migrants being Aryans, or of them bringing Vedic culture into India.

Fifth, the study does not assess the scale of the migration (how many individuals migrated, in how many pulses/waves).

In the light of these five points, can the study confirm that the migrants were Aryans? No, it cannot. It's beyond the study's scope.

Can the study identify the ethnic or genetic origin of the original inhabitants IVC? Can it identify their language or culture? No, it cannot. Again, it's beyond the study's scope.

Does the study demonstrate that the migrants brought Sanskrit and Vedic culture into India? No, it does not.

Does the study confirm that there was an "Aryan invasion/migration"? No, it does not.

Thus, on examining Reich et al.'s paper in the larger context, we find that it does not, in any shape or form, confirm the AIT. Rather, we find that it is limited in scope, and that its results fit quite well within a larger cycle of back-and-forth population migrations whose most common recent ancestor (MRCA) originated in India.

The fact that there were migrations into India should not surprise anyone. Human history is a history of migrations, and recent discoveries in Asia are beginning to convince historians that the story of our species needs rewriting again.

We know of many peoples that migrated to India: Greeks, Scythians, Kushans (Tocharians), and Huns, among others. Modern India's population is undoubtedly mixed; an amalgamation of these various ethnicities. Some of India's greatest leaders were immigrants. Take the great emperor Kanishka, for example, who was a Kushan. He forged a great empire that included much of the Tarim river basin. He worked tirelessly to foster Indian culture and values and promote them throughout Asia. He valued Indian lives and pursued India's national interest. I daresay he was more Indian than most Indians alive today.

This is the reason why the debate is intensely political and controversial. Large sections of India's political spectrum seek to portray Hinduism and Sanskrit as the culture of invaders and oppressors, the oppressed being the Dravidians and the Dalits. It is vitally important for them that the AIT remains the dominant narrative in India. It is critical for them to keep spinning a narrative that favours the AIT. History has shown that they will stop at nothing, including deception and outright lies.

The Quint and Economist articles are symptoms of this political ecosystem’s foot soldiers – sepoys – at work.

There exists a vast amount of archaeological, literary, linguistic, and genetic evidence which, taken together, clearly demonstrates that India's unique culture and civilisation emerged and developed within India's distinctive geography, and that they form an unbroken continuum that spans several millennia and continues to the present day. This is an inconvenient fact that the aforementioned sepoys are working hard to obfuscate.

Reich et al.’s paper represents the dawn of genetic research into India's ancient past. One hopes that it will spur more research in the field. There is a long way to go. Much more work will have to be done, much more data analysed, before a clear picture of India's genetic past (and indeed, that of the world) emerges.

The only thing that will settle the ’Aryan invasion/migration’ debate once and for all is a large-scale genetic study of ancient DNA from ancient IVC individuals. This should include a large number (several hundred, ideally) of pre-5000 BCE individuals, including pre-7000 BCE individuals.

At present, there is no such project in the pipeline. If such a project fructifies, it will take several years, probably over a decade, to complete, due to the scale and complexity of the work involved.

One thing is sure: the question of the origin of the Indian people isn’t going to be “settled” anytime soon. Settle down, folks. We're in for a long ride.