When Did ‘Death Before Dishonour’ Become Something To Mock? 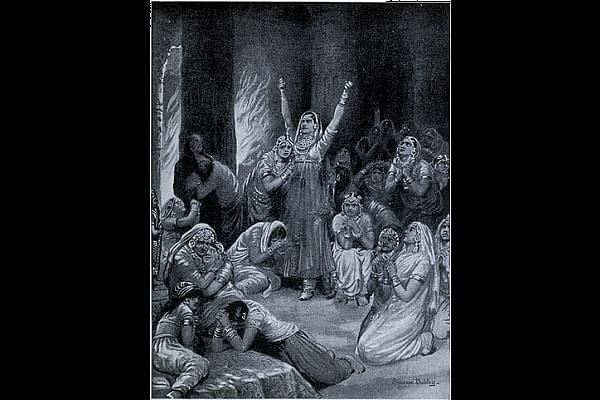 The Rajput ceremony of Jauhar (holocaust), 1567.

In the discussions about the film Padmavati, some people brought up the question of the code of chivalry of Hindus. It was phrased in an oblique way, in terms of whether Rani Padmini should have chosen to survive as a captured trophy in the harem of the invader Alauddin Khilji, instead of killing herself in ceremonial jauhar. Is death preferable to life, they asked rhetorically.

But this question can be rephrased slightly: “If rape is inevitable, why not lie back and enjoy it?”. I suspect that re-framing, putting it in the modern context of Harvey Weinsteins and the #MeToo campaign, would get a completely different response from the very same people. Somehow, they can see that a modern woman or child should have the choice to say “no”, but a medieval Hindu queen should not have refused to submit to a Muslim invader.

To put it bluntly, it is because of a certain widespread and unspoken idea in India that a coupling between a Hindu woman and a Muslim man is normal and somehow admirable, but not the reverse. This opinion has probably been shaped by Hollywood films, and the marriages of Muslim celebrities such as film stars and sportsmen to Hindu women. The narrative in India sees this as normal, and thus a Khilji lusting after a married Padmini is not seen as offensive.

There is moral relativism here, as is also seen in a different context where the same leftists celebrate Surpanakha. Now there’s a woman who, lusting after a married man who’s uninterested in her, is prepared to murder the wife whom she sees as her obstacle. It takes a warped sense of ethics and morality to see her as the wronged one; but then such is the dominant trope in India. Similarly, Khilji, as Aurangzeb, is being ‘rehabilitated’ in certain quarters: “He was not such a bad sort: see his reforms”.

That is the prerogative of the terminally brainwashed Lutyens types. But the idea of Hindu honour goes further. There is a question that is hurled around often: “Why is it that India is still majority Hindu after hundreds of years of Islamic rule?”. The obvious implication is that, like Khilji, the Mughals and other Muslim kings were not so bad after all, or else they could have forcibly converted all the Hindus to Islam. They didn’t because they were such nice guys, right?

Actually, no. There is a different answer to the question, or in fact several. One is that Islamic rule, despite being extremely gory (it is recorded in great, vivid detail by court historians) and no different in India than elsewhere, was never quite powerful enough. And that is because Hindus fought back, and they fought back continuously. The great imperial civilisations of Egypt and Persia fell within a few years of blitzkriegs by the Arabs. But India held them off for centuries till there was a breach in Sindh. Then North India was in a chaotic state of civil war from about the 1200s to about the 1700s. Wherever Islamic rule was really strong, it did in fact wipe out Hindus – as in today’s Pakistan.

The second answer, related to the first, is that there exists a Hindu code of honour. Hindus may wear their religion lightly, and laugh off even very virulent verbal attacks on it (as al-Biruni noted with amazement), but they believe deeply; they find the grand claims of other religions illogical and therefore see no reason to convert. Thus, they resist and, in the end, might choose death over dishonour. There is the story of the old Brahmin of Delhi, or the people of Goa during the Inquisition, who did not submit, and who chose to be tortured and executed brutally rather than capitulate.

The Rajputs did not submit, either. Jauhar is a magnificent act of chivalry and courage in the face of certain defeat – the womenfolk and children enter the funeral pyre so that even their dead bodies will not be desecrated by the invading hordes; and the men ride out to fight to death in a shaka wearing saffron robe. Death before dishonour. That is one of the most stirring tales of valour, much as the West likes to talk about Thermopylae and other tales of honourable warriors.

There are other stories of Hindu honour; for example, the chaver squads of a few highly trained men, who would take on the entire army of the Samuthiri king of Kozhikode, and fight to certain death in an attempt to get to the Samuthiri himself. On one occasion, a 16-year-old youth almost managed to kill the king. It was another magnificent spectacle, those doomed but courageous men of Valluvanad.

The bushido of Japanese samurai is well known, and it is in some ways similar to the kalari warriors of Kerala and their code of honour.

There is another instance of Hindu honour, and that is in the puputan in Bali, Indonesia. Many Indians are unaware of how the Balinese, in the face of superior Dutch firepower, committed a jauhar/shaka-like self-sacrifice. There were two in the last century. Dressed in funereal white, the Balinese, in the face of certain defeat, attacked the Dutch and were killed. In 1906 and again in 1908, they died, death before surrender. That’s chivalry we should celebrate.