When It Comes To India, Most Expatriate Journalists Display An Inherent Racism 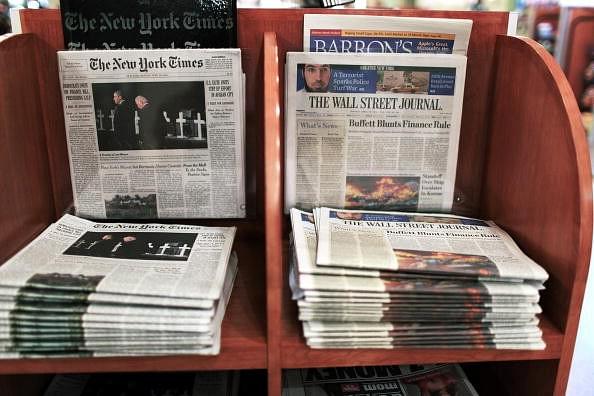 An issue of The Wall Street Journal is placed beside The New York Times. (Spencer Platt/Getty Images)

There was a recent incident wherein Annie Gowen, a resident correspondent in Delhi for the Washington Post, insinuated that those with ‘Rudra Hanuman’ in their Twitter display pictures were fake IDs, and should be culled. Upon being challenged, she proceeded to display what amounts to naked contempt for Hindus.

This sort of behaviour is appalling, but it is not surprising in foreign correspondents in India, who live in a Lutyens bubble and merely echo what their cocktail party acquaintances and hero-worshipping Jawaharlal Nehru University (JNU) acolytes tell them. As we know, Lutyens and JNU are just about the most anti-India cohort anywhere. In a case study of circular thinking, whatever fake news and exaggerations they convey to the foreigners gets published in some Western paper, which is then used as solid ‘evidence’ by the same Lutyens journos. It’s hard to find a better case of ‘truth by repeated assertion’.

This behaviour does afflict male as well as female reporters in Delhi. Not surprisingly, British males are the worst offenders; but American females also indulge in it quite happily. Speaking of British males, there was a correspondent for the Economist magazine who was transferred to India from Pakistan. He wrote then that he used to “have a drink and sit around wondering what the hell was going on” with his Pakistani buddies, but that he was not keen on “prickly nationalist Indians”. I remember his name, but since he discreetly took down that post on the magazine’s website before I had a chance to take a screenshot, I shall not accuse him by name.

But his experience sums up the classic expat response to India (I hasten to add that there are others, such as Francois Gautier and to an extent Mark Tully, who are exceptions to this rule). They are comfortable with Islam because, after all, it is in theory more or less identical to their Christian belief system. Besides, they soon learn, it is not wise to criticise Islam, as the consequences can be dire. On the other hand, there are no consequences to harshly demonising Hinduism, and indeed self-hating Indians with Hindu names will actually applaud them. So they carry on with their fake news and views.

The standard operating model for these 'journalists' is very simple and can be summarised in a few steps:

The best exemplar of the above pattern is Barbara Crossette, a New York Times correspondent some years ago, who remains the gold standard. She absolutely hated us (and she was mentor to a notorious local 'journalist' who suddenly chanced into massive, unexplained wealth). Her prior experience, as in books published, before she came to India? Something about the country inns or bed and breakfasts of America. Obviously this made her an expert on India!

Upon her return to the US, she wrote a tome on India, as in step 6 above. A reviewer from the University of California, Berkeley, wrote something to the following effect: “If you know nothing about India, you will learn nothing from this book. If you do know something about India, you’ll realise that the author has no idea what she’s talking about”. For instance, she berated Indians for not being physically fit. Her benchmark: we don’t play American football! (Or was it baseball? I forget).

The New York Times continued this hoary tradition with several other women: Pamela Constable, Heather Timmons, Lydia Polgreen. There is a telling story: Lydia Polgreen is black. And therefore it appears Lutyens/JNU circles didn’t quite warm up to her or lionise her. As a result, Polgreen’s reporting seemed far more sympathetic than that of the others. Which says a lot about both Lutyens/JNU lefties and about NYT reporters.

And Heather Timmons: she proclaimed grandly that Xi and Modi would never become global leaders until they ‘solved’ the “Rohingya problem”. China laughed in her face, but India, as usual, was easily cowed. Timmons was never clear about why on earth Rohingya, ex-Bangladeshis living in Myanmar, are India’s problem. After all, Rohingya are known trouble-makers. I mocked Timmons for idiocy, “Dear Heather Timmons: Duh!” and she promptly blocked me on Twitter.

I am not quite sure why the New York Times does this sort of thing, considering that it earlier had reasonable correspondents here, such as Steven Weisman and A M Rosenthal. I suspect it has to do with the US Deep State and its animus towards India. It is widely rumoured that the New York Times often voices the views of the US State Department, and that the Washington Post purveys the opinions of insiders in intelligence agencies (or maybe the other way around). I wrote some time ago in “Is India now part of a new ‘axis of evil?” that Russia, Japan and India had now become the ‘Axis of Evil’ for #deepstate, replacing Iran, Iraq and North Korea, and ignoring China, Pakistan and Saudi Arabia. Thus the need to put India down.

The same pattern holds in other papers, most obviously the Financial Times. Considering it is Japanese-owned now, one would think it would be more India-friendly, but no, it’s not. Earlier, it had Edward Luce, who sneered endlessly, and wrote an unreadable book. Then there was Victor Mallet who suggested that Hindu pilgrims, and the Ganga, were responsible for antibiotic-resistant bacteria. Then there’s James Crabtree who has just written a book about Indian tycoons (Step 6), although I don’t recall him being too unsympathetic as a journalist, and maybe his book has merit.

But the person I feel really sad about is Amy Kazmin at the FT. She has been in India for some years, and to begin with, she wrote even-handedly. I attributed that to her background as a liberal Berkeley graduate, and I became somewhat chummy with her on Twitter, using the Berkeley-Stanford rivalry. But over time she has gotten deeply embedded into the standard model, and has become an unrepentant basher of Hindus. Once, when I chided her about Hinduphobia, she remonstrated that her colleague was a Hindu kayastha from UP! Yeah, some of my best friends are Jews, too, as in the classic comeback.

This disease afflicts not only journalists, but also diplomats. Consider ex-CIA and State Department ‘South Asia’ expert Robin Raphel, friend of Pakistan, the Taliban and the Clintons, who single-handedly wrecked US-India relations a while ago. (She was caught in an espionage and counter-intelligence scandal regarding Pakistan, and her security clearance was revoked, but she was rehabilitated and was being repurposed to be the big subcontinent honcho again; but, alas, Hillary lost the election. Thank god for small mercies!). She has an axe to grind with India, perhaps because her ex-husband, then US Ambassador to Pakistan, was killed along with General Zia when the famous crate of mangoes blew up. Maybe she knows things we don’t.

There was also the sinister Madeleine Albright, who contemptuously lectured India on many occasions. More than what she said, the attitude – of an imperialist chiding a vassal – rankled. Another is the self-proclaimed expert on all things in the subcontinent, C Christine Fair, whose colonial hauteur is the stuff of legend.

The root cause of all this racism, I believe, does go back to imperial times. Imperial middle-class memsahibs, the wives of not-so-successful men, were transported to India, and suddenly lived lives of unimaginable luxury that they could not get to grips with, except by pretending that they deserved the servants and the obsequious fawning. They developed a theory of superiority to the locals.

I remember watching a scene in The Raj Quartet where a colonial woman has to constantly apply a perfumed handkerchief to her nose as she could not stand the smells of India. Similarly, in A Passage to India¸ the combined effects of life in India drive a young British woman to hysteria in the caves of Marabar. To them, India was alien, and went against their entire Judeo-Christian cultural indoctrination. It must have been hard to deal with.

There was another factor: what is known as the ‘Fishing Fleet’. A number of young colonial women were in the habit of taking a boat to India to try and snare some up-and-coming British officer in the military or civil service. An excellent idea, indeed, because these men, often not upper-class in their home country, would loot at will and amass huge fortunes. Thus these women were keen on landing one such officer, so they could retire in luxury.

They also wanted to keep their men from pursuing Indian women. Their competitive response? Covert or overt racism. They declared Hindus to be racially inferior, untouchable and beyond the ken of fraternising, on pain of ostracism. To put it bluntly, British women largely mainstreamed racism against Hindus (assuming they didn't invent it in the first place). Today’s Americans are just following in those pioneering footsteps.