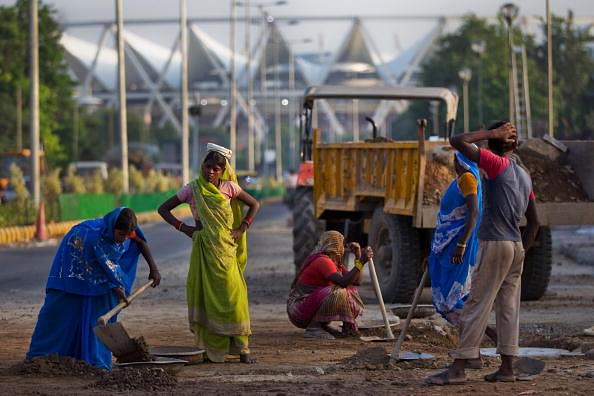 It reflects quite poorly on our political discourse that there has been almost no debate over the recently amended Minimum Wages Act, 1948 which increased the wages of labourers by a whopping 42 per cent. The intelligentsia applauds such populist increases irrespective of the government in power.

Union Finance Minister Arun Jaitley tweeted out that the 42 per cent hike for unskilled non-agricultural workers was historic! Other ministers of the Narendra Modi government have also fully endorsed this move, which came into effect in August last year.

And this phenomenon is not restricted to the Bharatiya Janata Party (BJP) alone. Days before joining the Aam Aadmi Party (AAP), renowned commentator on Urban affairs Ashwin Mahesh had this to say about the decision of the Delhi government to raise minimum wages by 37 per cent.

This puts another piece of the ‘basic human dignity’ basket into place. ... With higher wages too, they should have more discretionary funds to plan their lives with. These are necessary steps. And very doable in every state. These steps have a much higher chance of helping the country meeting its national targets for social and economic development. ….Of course there are costs too……... I believe that higher productivity in the local economy will help offset these costs.

Variants of the above argument are often given as a justification for hike in minimum wages. Hence, we need to examine this in detail. There are four parts to the argument. Proponents of such hikes believe that:

First, such arguments are based on the assumption that employers will bear the increased costs and would not resort to passing them on to consumers (thus reducing the discretionary funds available to workers who are also consumers) or end up firing a few workers to cut costs. Given that higher minimum wages are an impediment to formalisation of the economy (it makes hiring formal sector employees more difficult and costlier), low income citizens are forced to take up informal employment which is certainly doesn’t bode well for either the poor or the economy.

Second, the evidence that increases in minimum wages lead to job losses is quite exhausting. Given that the rules of economics don’t change just because we live in a different part of the world, all we need to do is to look at the evidence piling up against minimum wage increases in the west. A comprehensive study by economist David Neumark and researcher William Wascher is a case in point. According to the detailed review by Neumark and Wascher in 2007, of 100 (then) new minimum wage studies, two thirds found that such increases cause job losses. More alarmingly, 85 per cent of the most convincing ones among them showed job losses.

In a more recent (2015) study in Indonesia, researchers found ‘significant, negative employment effects of minimum wages among small firms, non-productive and less-educated employees, and female workers.’ This study was conducted among manufacturing firms in the country. The evidence clearly arrives at this conclusion - in areas where higher minimum wages can be enforced, job losses are imminent and will affect low-skilled workers and less educated workers disproportionately. It will also push workers to the less productive (and much hated) informal sector. In what parallel universe can this lead to better social and economic development?

Third, one of the most flimsy arguments in favour of minimum wage increases is that the costs of such increases to employers will be very minimal as it will be adjusted against increases in productivity. Not much evidence (other than International Labour Organisation studies) exists to support such a view.

Moreover, higher minimum wages pose barriers to workers from entering into formal employment and picking up those productivity enhancing skills in the first place. One is also forced to ask, if artificially raised wages increase productivity, what prevents proponents from giving their maids the same salaries that they get? After all, according to their logic, the costs are next to nil or at least bearable.

Fourth, the last part of the pro-minimum wage increase argument is that such increases are enforceable by Indian’s central or state government or local bodies. Anyone who has lived in modern India can confirm that the capacity of the Indian state is quite low. Some sectors like finance might see decent levels of state capacity. The state might even be able to enforce a good portion of the laws on its books in formal manufacturing units. However, the difficulty in enforcing the same in the informal economy is beyond doubt.

Most of the commentators and politicians who favour higher minimum wages also understand unemployment to be a social evil and informal employment to be bad for our society. One can only hope that these people see how much minimum wage laws, and increases, contribute to these evils.