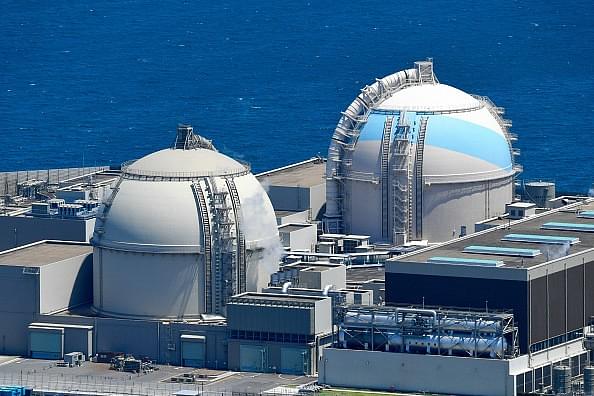 Time for an urgent rethink of the global nuclear power strategy. (Asahi Shimbun via GettyImages)

Not so long ago, Seattle became the first major US city to ban plastic straws. This prompted California, Washington, New York, and corporations like Starbucks, American Airlines, and Marriott Hotels to debate a ban on the same. The basis for this ban was a survey that concluded Americans use in excess of 500 million straws each day. The survey was carried out by a nine-year-old.

When it comes to matters pertaining to environment conservation, activism often trumps logic. Of the 8 million metric tonnes of plastics that enter the oceans each year, straws constitute only 0.03 per cent of the waste. Yet, a significant amount of resources were diverted towards implementing the straw ban. Nuclear power, across the world, suffers from the same fate, for any prospects of rational discussion on nuclear energy have been lost in renewables backed jingoism.

The nuclear industry is in the midst of a slowdown worldwide. In 2017, US-based Westinghouse, known for its innovation in the realm of pressurised-water reactors (PWR), and one of the global leaders in nuclear technology, filed for bankruptcy since they could not make any headway with their latest reactor, the AP1000. Toshiba, another nuclear powerhouse from Japan, has gone public about its doubts for the future, given the financial troubles it finds itself in. Things have become difficult for Électricité de France (EDF), the biggest nuclear power company in Europe, given President Emmanuel Macron’s stance against nuclear energy. Together, the three companies are responsible for more than 50 per cent nuclear power generation worldwide, and yet, they face an uncertain future.

Interestingly, even with Macron’s resistance to nuclear energy, France derived 71.6 per cent of its electricity through nuclear energy. The percentage stood at 20 for the United States, 27.1 for South Korea, 33.4 for Switzerland, 49.9 for Belgium, 11.6 for Germany, 6.2 for Pakistan, and a mere 3.2 for India in 2017.

France aims to bring down its share of nuclear energy in electricity to 50 per cent by 2025. With most reactors in the country beyond an age of 30 years, there are little chances of these reactors being replaced by newer ones. Britain, without a domestic nuclear reactor manufacturer, is finding itself increasingly dependent on Chinese and Korean companies. With companies like Westinghouse collapsing, countries like China and South Korea are filling in the gap in the realm of nuclear reactor manufacturing.

For the global prospects of nuclear energy, the Fukushima accident in Japan in 2011 has been a hindrance. Japan shut all its 48 nuclear reactors after the incident, and in 2017, only five were back online. The shock from the Fukushima disaster has ensured no large-scale reliance on nuclear energy. The stiff resistance from the local politicians and communities has further added to the anti-nuclear drive. However, how justified was the fear attached to nuclear energy?

When it comes to any discussion on nuclear energy, three accidents are always mentioned.

Firstly, the accident in 1979 on the Three-Mile Island (TMI) in Pennsylvania. The 2 million people affected were exposed to radiation 1 millirem above the average radiation. Radiation exposure from X-Ray is 6-millirem, while the average radiation from the reactor was 100-125 millirem. Thus, the impact on public health was negligible, according to the United States Nuclear Regulatory Commission.

Two, the accident in Chernobyl, Ukraine in 1986. Known as the worst nuclear accident in history, the event helped self-proclaimed environmentalists and activist groups make a case for a nuclear-free future. The accident led to the death of 29 workers due to extensive radiation exposure. Since 1986, however, the United Nations Scientific Committee on the Effects of Atomic Radiation identified no elaborate health consequences. However, thyroid cancers were noticed in Belarus, Ukraine and Western Russia, amongst those who were young during the accident and consumed milk containing iodine. More than 6,500 cases of thyroid cancer were detected with 15 deaths as the result of the Chernobyl nuclear fallout.

To put things in perspective, the exposure from the radiation from Chernobyl for the people from 1986-2005 was 30 millisievert or mSv for the ones who were evacuated, 1 mSv for the residents of USSR, and 0.3 mSv for the European population. In comparison, a full-body CT scan results in an exposure of 10-30 mSv.

The third accident and the most recent one is that in Fukushima, Japan, in 2011 which was a result of a tsunami that followed an earthquake. The tsunami caused the power system to flood, thus causing a meltdown of the cooling systems of the reactors. Over 150,000 Japanese citizens had to be evacuated. However, according to a report with the International Atomic Energy Agency, the 195,000 odd residents living close to the plant showed no harmful effects from the meltdown when they were screened in May 2011. Also, the report stated that there was no radiation exposure for the public from the meltdown.

Thus, it won’t be wrong to say that nuclear energy has been a victim of bad press and jingoistic activism. For long, renewables have been pitched as an efficient energy source to combat the excessive use of fossil fuels and as a replacement to the available nuclear options. So, what are the observations here?

In 2016, US generated 20 per cent of its electricity through nuclear power plants. The nuclear reactors worked for 336 days out of the 365. The remaining days they were taken offline for maintenance. In comparison, hydroelectric systems, wind turbines, and solar arrays worked for 138, 127, and 92 days in the same year. So much for reliance on renewables alone. A year before that, the global energy output through these renewables stood at 1.8 per cent, far less for the resources that were invested in them.

Preventing the global temperatures to rise beyond the two-degree threshold using renewables alone is like chasing down 200 in a T-20 game with a plastic bat. Even today, over 80 per cent of the world’s energy is derived from fossil fuels. Developing countries across Asia have not been able to curb their emissions until now. While the ozone layer may have shown signs of improvement, the atmospheric concentrations of carbon dioxide are increasing.

Perhaps, we have been making the same mistake lawmakers and citizens in Seattle, New York and Starbucks are making?

Sometime in the 2030s, the atmospheric concentration of carbon will exceed 450 parts per million, rendering the two-degree target useless. Thus, the only solution will be to decarbonise the atmosphere. However, the technology for that is still alien to mankind. Investing in renewables while ignoring nuclear options may make for good theatrics, but they are not going to solve the bigger problem. India alone, to reduce its dependency on coal for power generation must make a shift towards nuclear power, but there has been no debate about it in the public space. It would be unwise for a country like India to invest in renewables alone to combat carbon emissions, especially when power consumption per capita continues to rise.

Unfortunately, investments in the nuclear industry come with fragility and uncertainty, for even a single man-made or natural accident could result in governments, communities and companies pulling out their investments and abandonment of nuclear projects. Increased investment by US in natural gas and its ability to extract more oil than Iran and Iraq combined will deter it from making more investments in the nuclear industry. China, looking to recreate an export-driven cycle of growth, has been investing highly in renewables, even though they continue to sanction the construction of eight nuclear reactors.

Climate change is real and it’s here. However, like a boatman in a storm, we are expecting a straw to help us correct our sails. Sadly, it’s not going to be enough, and if leaders across the world are serious about fighting climate change and curbing carbon emissions, an urgent rethink of the nuclear power strategy worldwide is the need of the hour.