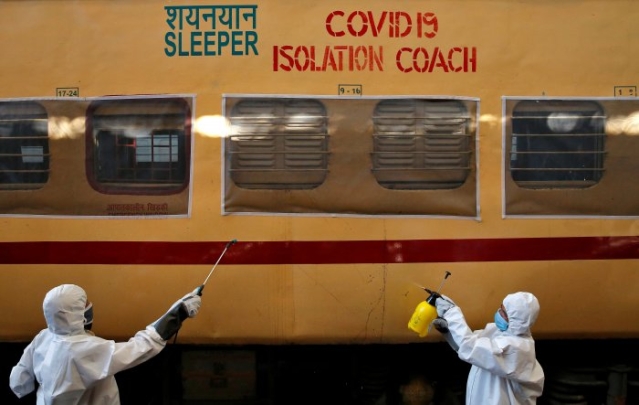 Amid a worrying spike in infections in the capital city, the Railways is deploying 240 more isolation coaches at various stations including Nizamuddin and Anand Vihar, taking the total Covid Care Centres to 250 in the region.

Starting from Sunday, isolation coaches would be deployed at Anand Vihar, Old Delhi, Safdarjung, Sarai Rohilla, and Nizamuddin stations in the wake of rapid spread of Coronavirus in the national capital, sources in the Railways told Swarajya.

With the deployment of 250 coaches, railways has provided a total of 4,000 isolation beds to the city government which is facing a massive shortfall of Covid care facilities.

Since Delhi is becoming the third worst affected state in the country, an all-out effort is being made by the Centre to contain it in a coordinated way, with Union Home Minister Amit Shah slated to meet Delhi Chief Minister today.

Shah would also hold a review meeting with all Mayors of Delhi on Covid-19 situation in the city.

Till now, 10 isolation coaches with 160 beds are being stationed at Shakurbasti station.

After a detailed discussion with Delhi government, Northern Railway has started mobilising 240 isolation coaches to Delhi Division, it is learnt.

Complementing the government's efforts against Covid-19 pandemic, the battle-ready Indian Railways has made a total of 5,231 isolation coaches including 540 coaches by Northern Railway to cater suspected patients across the country.

Earlier, the government had earmarked 215 railway stations for the deployment of isolation coaches to be used as Covid Care Centres for suspected or confirmed patients categorised as mild or very mild cases.

Railways shall provide linen, water, electricity, oxygen cylinders, proper signages and security arrangements for the Covid coaches during their operation at various stations.

However, arrangements necessary such as personnel, and material for all the onboard management activities for patients and other works such as housekeeping, laundry, and biomedical waste disposal shall be done by the Delhi government.

The situation has assumed an alarming proposition with Delhi reporting 2,134 new cases, the first time that over 2,000 fresh infections were reported in a 24-hour period in the city.

The meeting will be followed by one between Harsh Vardhan with mayors of Delhi municipal corporations.

On Friday, the Supreme Court pulled up the Delhi government over the ‘horrendous, horrific and pathetic’ situation in the city and said Coronavirus patients were being treated ‘worse than animals’.

With rising cases, other states have also sought isolation coach deployment at their respective cities.

While Uttar Pradesh has finalised 24 stations, Telangana has asked for coaches to be stationed in 3 locations — Secunderabad, Kachiguda and Adilabad.

Zonal Railways has converted these coaches for quarantine facility. The coaches can be used for very mild cases that can be clinically assigned to the Covid Care centres as per guidelines issued by the Health Ministry.

These coaches are to be used in areas where the state has exhausted the facilities and needs to augment capacities for isolation of both suspected and confirmed Covid cases.

These facilities are part of the integrated Covid plan developed by the Health Ministry and NITI Ayog.