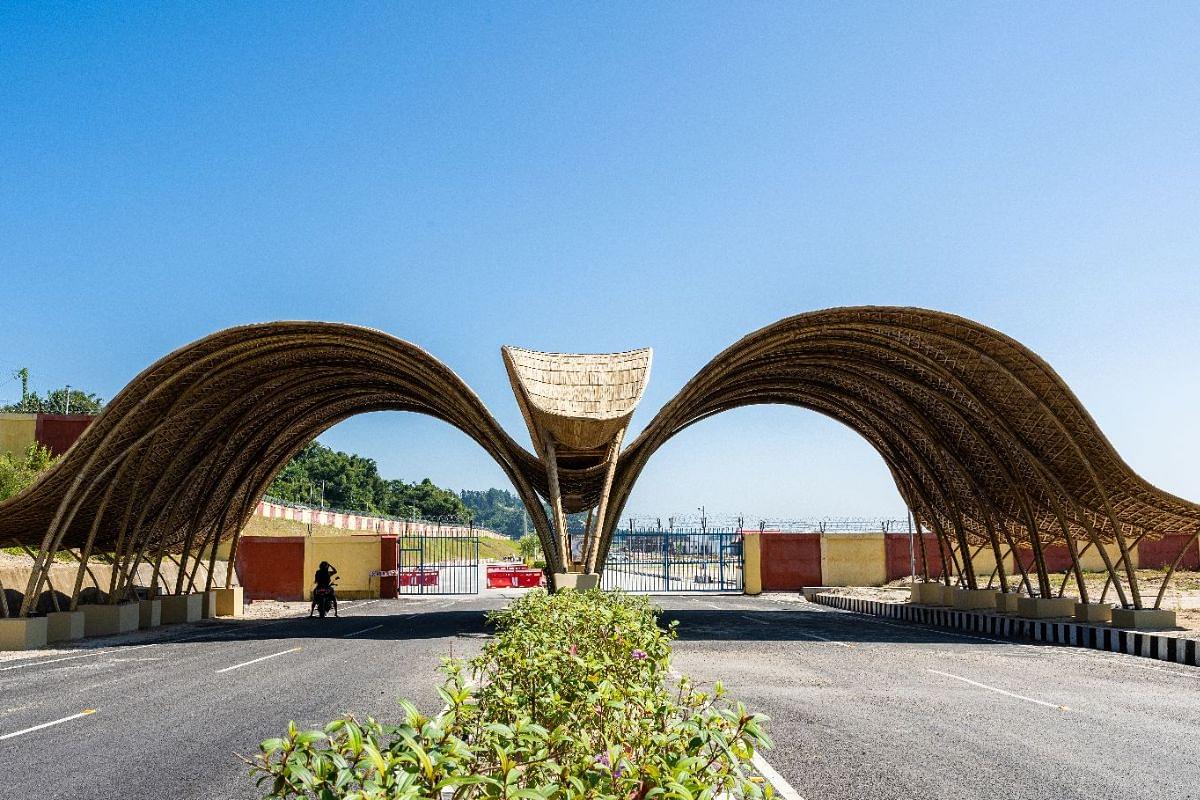 Donyi Polo Airport’s massive gate in shape of a hornbill.

Arunachal Pradesh’s new Donyi Polo airport, which is scheduled to be inaugurated by Prime Minister Narendra Modi later this month, will showcase a unique architectural marvel that is a prime example of a well-designed, sustainable and eco-friendly structure.

The airport’s massive gate, made entirely out of bamboo and cane, is the biggest public structure in India made out of naturally-available materials.

Designed by young architect Aroty Panyang who is a native of the state, the gate has been built to last a lifetime.

Spread over an area of 2,500 square feet, it is 23 feet high and 82 feet wide--enough to allow unhindered movement of all types of vehicles including massive cargo trucks.

The gate, in the shape of a hornbill which is Arunachal’s state bird, took five months to build by 15 specialised bamboo artisans of the state who worked full-time on it.

Terming it as a “landmark project”, Panyang told Swarajya how the hornbill provided her the inspiration to design the gate. “The hornbill is a unique bird with very distinctive features. We studied all aspects of the bird--its features, form and flight. These features were then incorporated in the design of the gate,” she said.

The most striking characteristics of the hornbill are its beak and its great wingspan. The gate emulates the wingspan spread over the entry and exit lanes of the airport. The gate is like a double-headed hornbill with its unique beak so that people entering and exiting the airport are greeted by this majestic bird,” said Panyang.

The young lady, who belongs to the Adi tribe, got her degree in architecture from the Bharati Vidyapeeth College of Architecture at Pune. She then chose to do her thesis project on bamboo architecture.

Since then, she has worked very closely with the globally renowned Markus Roselieb of Chiangmai Life Architects in Thailand. She is developing multiple projects with them.

Panyang has also trained with the world-famous Bamboo U of Bali and Germany’s Jorg Stamm, another world-famous bamboo architect.

Panyang started Studio Aro in 2018 “with the intention of establishing a practice that will focus solely on bamboo and sustainable architecture”.

“Since the industry for permanent bamboo architecture is still very nascent, we want to make a mark on this movement and contribute to the growth and adoption of sustainable architecture in India,” she said.

“One of the greatest aspects of using natural materials like bamboo and cane is that they hugely benefit the local economy. We work with local artisans and this gives them an opportunity to practise their traditional crafts in a profitable manner. One of our key aims is to keep these local art forms alive,” she said.

Arunachal Pradesh and its people, said Panyang, have a very close relationship with nature and use bamboo for construction of their houses, community halls and other structures as well as for making items of everyday use like baskets and mats.

“Since we wanted not only the design of the gate, but also the materials used in its construction, to be symbolic and typical of our state, bamboo and cane became the natural choice. We have an age-old relationship with these two materials,” she explained.

The process of building the gate started with selection of the bamboo and cane. “Healthy groves were identified and only bamboo which was four years old was harvested.

"Two species of the plant--bambusa tulsa (locally called ‘jati’ bamboo) and bambusa balcooa (‘baluka’)--were chosen. Jati bamboo was used for the roofing and ‘baluka’ for the arches and main structure,” said Panyang.

Allaying fears about the longevity of the gate, Panyang said: “It is often said that if you give the bamboo a hat and boots, it will last a lifetime. What is meant is that if bamboo is cured and looked after properly, it will last for a very long time.

The bamboo harvested for constructing the gate was treated and preserved with non-toxic salts such as borax and boric acid powder. “That prevents infestation by beetles and other bugs, and greatly increases the structure’s lifespan,” she added.

The monsoon, which spans many months in the state, posed a problem. But that was overcome by pre-fabricating parts of the structure off-site in a covered location. Panyang says her team of 15 artisans found it easy to shape and mould the baboo “since they have grown up with the material”.

Panyang says that it is important to stay true to one’s roots. “Since we belong to the lush forested areas of northeast India, we have a deep connection with nature. Bamboo is our speciality and a material close to our hearts.

"As an art form, it has been passed to us through generations. We weave and create, we are proud of our skills and we are keen to share them with the world while contributing to the sustainable architecture movement globally,” she told Swarajya.

Panyang hopes that the gate will “rekindle the relationship of the people of Arunachal Pradesh with bamboo”. But more than that, it will serve as a great example of sustainable architecture that needs to be replicated.

Arunachal Pradesh Chief Minister Pema Khandu, who is excited about the gate and had tweeted about it, says that the bamboo and cane gate, being the first such public structure in India, will serve as a model for sustainable architecture that can be replicated in other parts of the country.

(Watch this video on the gate)