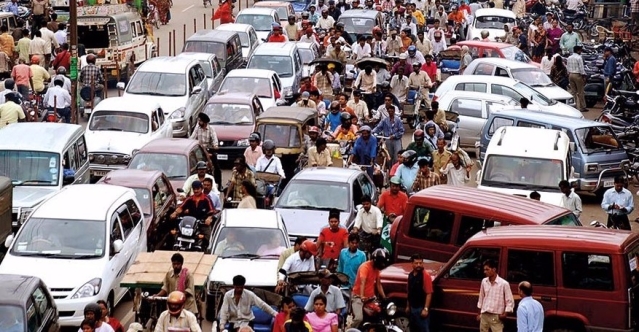 The traffic chaos in Bengaluru.

If you want a good example of bad traffic and road management, look no further than global IT city Bengaluru. In most of the newly-developed IT hotspots of the city, roads, speed-breakers, traffic signals, bus stops and pedestrian crossings follow few design principles or the specifications of the law. Thus, what passes off as traffic management impedes vehicular and human traffic flows, often endangering lives.

It is thus good news that a compensation of Rs 22 lakh has been awarded by the Karnataka State Consumer Disputes Redressal Commission for a badly designed speed-breaker in BTM Layout (somewhere to the south-east of the city) that caused the death of a software professional in February 2008. The fine has been imposed collectively on the traffic police, the BBMP (the city municipal corporation), and the state’s urban development department (UDD), none of whom (predictably) accepts responsibility for the death of Surya Prakash, who was riding a bike home around midnight when he skidded at speed-bump and met with a fatal accident.

According to a report in The Economic Times, while the traffic police and the UDD denied it was their job to manage speed-bumps, the BBMP claimed that Surya Prakash was killed because of a skid near the bump and not on the bump itself. This is questionable, since skids happen because the rider sees the bump a bit too late, and braking suddenly can result in skidding.

Bengaluru roads are killers by bad design, and in 2014 the traffic police reported 729 deaths – roughly two daily. While over 90 per cent of these accidents have been attributed to rash or reckless driving, it raises the question: isn’t this what traffic rules are about? Rash driving is not just about poor driving or riding skills (which means the Regional Transport Office isn’t doing its job), but also poor traffic policing and non-enforcement of road rules, among other things.

Consider the many transgressions on the road.

It is common to see cars, mini-trucks and two-wheelers ply on the wrong side of the road – they come in the direct that is opposite to the flow of one-way traffic – and it happens because they don’t want to drive a bit further before a U-turn.

Many speed bumps are built to excessive heights (the rules say they should not exceed 0.1 metres; read the guidelines here and here), thus hitting car undercarriages often, causing damage to vehicles. If car owners took the BBMP to court just like Surya Prakash’s father did, the municipal authorities would not be so careless. Some of the speed-bumps do not even sport visible black-and-white bands or signages to warn riders or drivers of the bumps ahead. This is one reason why Surya Prakash may have failed to see the badly-built BBMP bump nine years ago.

Public buses are incentivised to pick up as many passengers as possible, which means they wait longer than needed at busy bus stops to collect passengers. Multiple buses halting at the same stop means some of them are double-parked illegally (though temporarily), restricting available lanes for moving traffic. Thus, despite road spaces being adequate, buses constrict flows artificially.

On many side roads, speed bumps and artificial vertical barriers are erected illegally by citizens themselves, apparently to prevent too many vehicles from using these roads. But there is no action against such lawless restrictions on traffic movement. When the law recedes, citizens take the law into their own hands.

Drains are desilted to allow rainwater to flow into them and not form pools on roads, but the debris and muck is left on the side of the drain for so long that half of it falls back into the drain before being removed. Surely, the people desilting drains are not in talking terms with those who have to move the muck. Whether you clear the drains or not, the muck constricts road spaces.

Pedestrian skywalks in busy office areas like the Outer Ring Road-Sarjapur area, where lakhs of people come to work every day, have been an after-thought rather than a part of road-building schemes. Citizens thus must dash across roads brimming with cars and buses, risking life and limb.

When public pressure builds up, road dividers are suddenly cut by the traffic police to allow cars and bikes to make U-turns without going the regular distance. Thus, at many places, you have bikes and cars trying to bisect high-traffic trunk roads at right angles – an unthinkable situation in any modern country with any degree of road sense.

If you want to see what not to do about traffic management, Bengaluru should be first on your travel plan.

Note: The above rant may be loaded against Bengaluru, but these are based on actual observations. Some other cities could be worse, and I invite readers to send me gorier stories of traffic mismanagement for future reference.