Explained: Why Kerala Has Decided To Reconstruct A Kochi Flyover Within Three Years Of Its Inauguration 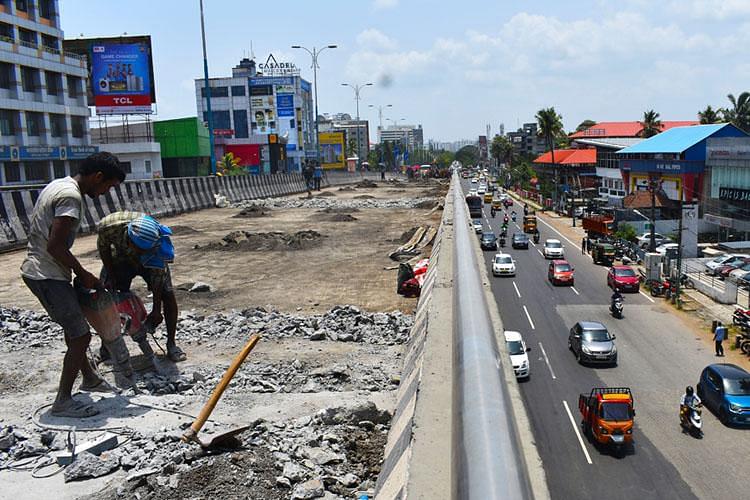 Kerala government to rebuild the Palarivattom flyover in Ernakulam.

The flyover was inaugurated less than three years ago on 12 October 2016. The decision to rebuild the flyover was taken after an expert committee headed by 'Metroman' E Sreedharan recommended its reconstruction to strengthen it. The committee also included specialists from the Indian Institute of Technology, Madras.

The expert team found that inferior quality cement was used for construction and the quantity of steel used was inadequate. The reconstruction is likely to begin in October.

The Palarivattom flyover, which was expected to be in use for 100 years, was shut for traffic in May this year after major flaws were detected in it. Initially, it was shut for a month before an indefinite closure was announced.

The structure, constructed to decongest the National Highway Bypass that intersects the busy state highway of Ernakulam-Kakkanad-Muvattupuzha, came up at a total cost of Rs 72 crore.

The Roads and Bridges Development Corporation of Kerala was given the responsibility to construct the flyover with RDS Project Limited, a private firm, bagging the contract for the construction.

It was built during the Congress-led United Democratic Front (UDF) government headed by Oommen Chandy with funds being allocated by the Kerala Road Fund Board through the collection of fuel cess.

Traffic on the flyover was halted after it developed cracks, especially at the expansion joints.

A fallout of this is a political spat between the UDF and the ruling Left Democratic Front (LDF) headed by Communist Party of India-Marxist (CPI-M). The LDF is demanding an investigation into the irregularities committed during the construction of the flyover.

In turn, the Congress and its UDF allies have raked up a controversy over the construction of another flyover at Vytilla in Kochi, which is 5 km from the Palarivatoom flyover.

In July, the Kerala Public Works Department (PWD) came out with a report expressing serious concerns over the quality of Vytilla flyover. Congress leaders, in particular, have made use of this opportunity to stage protests.

Pressing the panic button, the LDF government suspended the PWD engineer who submitted the report, holding him responsible for its leak to the media.

Soon after the flyover was shut, the Kerala government asked the Vigilance and Anti-Corruption Bureau (VACB) to investigate the flyover deal.

Before the VACB could begin its probe, Vijayan told Kerala Assembly that those involved in the construction of the Palarivattom flyover would not be spared.

Speaking on the floor of the house on 11 June this year, the Chief Minister referred to a VACB “report on corruption” submitted in 2015.

The 2015 VACB report pointed out how corruption flourishes in Kerala PWD.

One of the major issues was that the percentage of the bribe to be offered to the department staff at various levels would be fixed before a budget was prepared for any public project.

Then, bills were passed before the work was completed with the bribe being deducted from them. A rise in the project cost was approved after securing a bribe.

Materials supplied by the PWD for construction were sold off illegally by contractors. Bribes for transfers and postings and other issues such as improper measures were also pointed out as irregularities that prevailed in the department, according to the VBAC report.

The needle of suspicion in the Palarivattom flyover case points to the PWD minister in the UDF rule, Ebrahim Kunju, who belongs to the Muslim League.

One of the allegations against Kunju is that he had approved the payment of Rs 8.25 crore as advance to the firm that was selected to execute the project. The advance was given at low interest, though there are no such provisions to grant advance.

Sooraj, who belongs to the Indian Administrative Service cadre, has said that he had acted on the orders of Kunju, who signed all the necessary papers for the flyover. It is likely that the former Muslim League minister could be arrested soon in connection with the case.

On his part, the former PWD minister has justified the grant of advance. He has justified his action on the ground that there is a provision to do that.

Meanwhile, taking up the petition of one of the four arrested in the case, Justice P Ubaid of the Kerala High Court remarked that the flyover case reminded one the famous Malayalam film Panchavadipalam in which a bridge collapses on the day of inauguration.

The High Court has asked the VACB to file a report explaining the progress in the flyover case.

As the CPI-M and Congress fight over corruption and irregularities in flyover constructions, the last word hasn’t be said on the issue yet.