Flood For Thought: When Mumbai Pours, It’s Time To Reflect 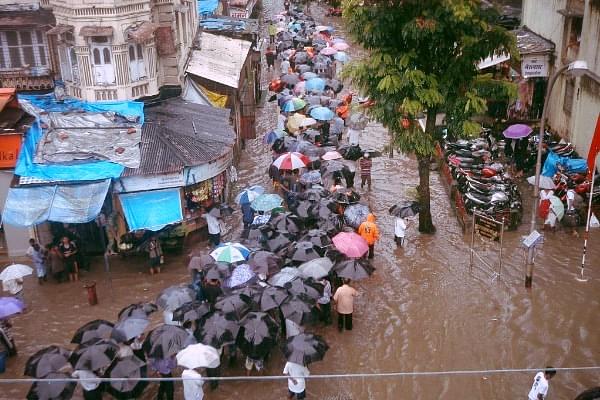 When it rains in Mumbai, infrastructure is the first casualty. (Nagesh Ohal/India Today Group/Getty Images)

As May draws to a close, Mumbai begins to see signs of an approaching monsoon. Like a bully on his last legs, summer goes into overdrive. Humidity picks up, and yet for the city’s residents, this poses a mixed bag. It hints of an imminent closure to heat, yet at the same time, humidity has to be endured, for seasons too are like egos at war; they don’t give in easily. When the showers come, it is a welcome relief.

Barely a week into the south-west monsoon, Mumbai’s residents start dreading the difficulties caused by rain. July and August are the tricky months to negotiate as the monsoon is known to play havoc with urban infrastructure. And, this has a cascading impact on various verticals. For a city addicted to running on schedule, smooth transport is critical. Transport is the first casualty of the rains. Dust and grime mixed with water makes roads slippery, traffic signals dysfunctional and railway tracks waterlogged, thus delaying trains. In a country given to undisciplined driving, the breakdown of the transport system makes for a nightmare. In all this chaos, frustration runs high, leading to human pathos.

Ever since that day in July 2005, when a cloud burst marooned Mumbai and killed many, Mumbai’s residents have real worries about water logging, flooded streets hiding open manholes, train services coming to a halt, traffic snarls, building collapses and falling trees among a very long list of other inconveniences. However, it is pertinent to add that all this is not new. Most monsoon seasons, for example, have an incident or two on the above mentioned lines. Except, we have added people, dwellings, factories, vehicles and garbage. Simply put, we push the limits and expect rains to comply. July 2005 illustrated what can happen to an ill-prepared city when natural forces combine to deliver a shocker. Imagine how much has been added to Mumbai’s load in the dozen years that followed. According to media reports, in 2006-2007, Mumbai had 15.03 lakh registered vehicles. By 2016-2017, it was 30.69 lakh. Stuck in traffic, you should perhaps contemplate how much your ride adds to climate change and congestion. As human beings change, so does nature. In the years gone by, the monsoon was a consistently rainy season. Now, it comes in fits and starts, but when it decides to hit, it hits really hard.

Mumbai receives a huge amount of rainfall during the south-west monsoon season. As per annual average statistics, the city receives 2,400 mm of rain. Its storm water drains are inadequate to contain the deluge. In earlier years, open spaces helped soak up or drain some of the excess water. Over the years, however, open spaces have disappeared. Land has been lost to roads, buildings and slums, offering little scope for groundwater recharge or drainage. Excess rain water ends up inundating several parts of the city. Areas that get flooded include Hindmata near Dadar, parts of Dharavi, Byculla, Kurla East, Kurla West, King Circle, Santacruz East, parts of Khar, Nagpada, Malad and Marol among many others.

Born from a string of islands in the tidal sea, Mumbai has a drainage problem. What collects within does not flow out if the tide is high. On 26 July last year, the city and suburbs recorded 944 mm of rain and on the next day over 600 mm of rain. Mumbai’s neighbouring district, Raigad, received heavy rains on July 25. All the lakes started overflowing as did the Mithi river that runs through the city. The highest tide fell on one of these days and as a result, water levels kept rising, inundating many suburbs. Over a 1,000 people died and ever since, the monsoon, although coming as a respite from the scorching heat, is taken very seriously by Mumbaikars.

The Mithi is a mirror to Mumbai. A river that overflows and swamps its neighbourhood isn’t as bad as a sewer doing the same. Owing to industrial effluents, garbage, household waste and construction debris, the Mithi is now a dead river, but a giant sewer. A city is as bad as its habits, be it spitting or indiscriminate dumping of waste. This is what makes flood water dirty, opening up the possibility of disease. In the aftermath of the July 2005 flood, Brihanmumbai Municipal Corporation (BMC) started work on cleaning the Mithi.

However, large stretches of the river are yet to be deepened and desilted. Encroachments can still be seen on its banks. As the years go by, even as the city positions municipal workers and pumps to tackle the issue, water logging has become a problem due to a bloated population, growing number of buildings and poor waste management. In a bid to upgrade Mumbai’s storm water drainage system, BMC commenced the Brihanmumbai Storm Water Drainage System (Brimstowad) project, which entails reconstructing many of the drainage systems. Some of the projects under Brimstowad are yet to start. It’s a vicious cycle, if you know what I mean.

The rains are not all worry, though. For Mumbai’s classical music lovers it’s time for concerts, featuring monsoon ragas such as Miya Ki Malhar, Goud Malhar and Des, something that is unique to the city.

The end of the brutal summer season with the arrival of rains is also good news for Mumbai’s growing community of long-distance runners,

For the city’s army of hikers it is the best season to roam the Sahyadri; this is when the hills turn green, mist-wrapped and cool. As news reports of deaths at waterfalls show up, over-enthusiasm claims victims here too. But on the whole, despite humanity’s ways, nature’s take on the monsoon continues to be true – this is the season of life. If only our life was in tune with nature.

Latha Venkatraman is an independent journalist based in Mumbai.