From FGM To Burial And Ashes Immersion, Religious-Cultural Practices Need A Rethink 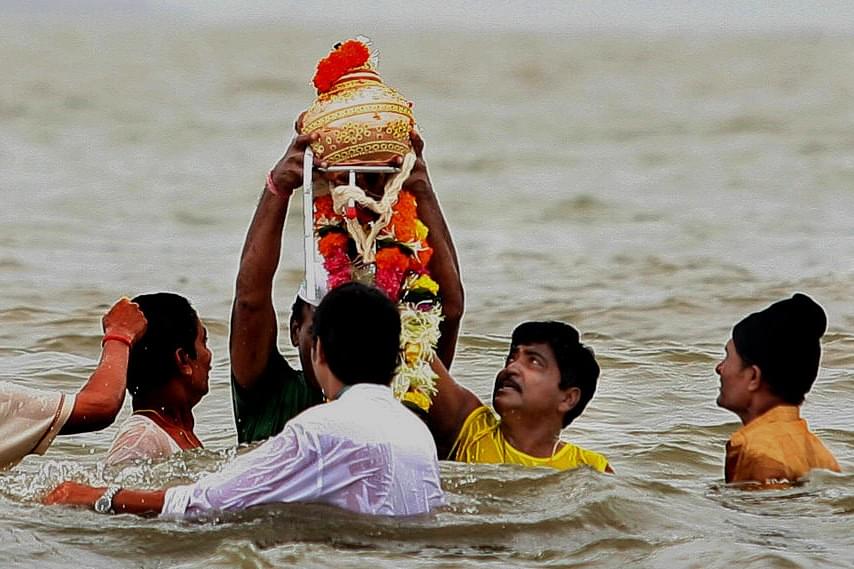 Immersing the ashes in a water body creates ecological and pollution problems that are aggravating by the day. (Satish Bate/Hindustan Times via GettyImages)

The Supreme Court’s ongoing hearings on banning the practice of female genital mutilation (FGM), and other court battles over the allotment of burial grounds for various communities, especially Muslims, Christians and some Hindu castes, should prompt all communities to have a serious rethink on religious-cultural practices that have evolved over the ages. These practices need tweaking to adjust to modern-day realities.

While hearing a public interest litigation in the FGM case, a Supreme Court bench headed by Chief Justice Dipak Misra asked why this practice, which is thankfully restricted only to some Muslims communities, should not be considered a violation of child rights and female bodily autonomy. Appearing for the Dawoodi Bohra Women’s Association for Freedom of Religion, Abhishek Manu Singhvi, claimed that this thousand-years-plus religious practice, called khatna, involved only a tiny cut in a female child’s genitals and it was as harmless as male circumcision. The evidence, though, is to the contrary (read here and here).

But whatever the truth about FGM, it begs the question: do parents have the right to do female (or even male) genital mutilation, when both genders can decide this when they are adults? It is one thing to do circumcisions when there is a medical need for it or even as a preventive for infection-prone children, but should either practice become routine?

In another court hearing in Mumbai, this time at the High Court, petitioners objecting to the creation of a Muslim burial ground near a 11th century Shiva temple got an earful from the bench on secularism and democracy. The court rejected out of hand the petitioners’ claim that this proximity between a temple and a kabrastan could occasionally create communal tension.

One can quibble with the court’s reluctance to take a view on what could happen in future, and what ought to happen if there is communal tension, but the real underlying issue is that burial grounds are simply too much of a burden on states and citizens in urban areas, where land parcels are very costly. Issues about land allotments have been regularly cropping up in several cities (read samples here, here, here, here, and here), and the problem will only worsen as communities that bury their dead demand more pricey land to do so.

In the case of Hindu disposals of the dead, cremation is certainly clean and final and less demanding of land resources, but the religious requirement of immersing the ashes in a water body creates ecological and pollution problems that are aggravating by the day. Centuries of immersing ashes in rivers and lakes, especially the Ganga, have ensured that the holiest river of India is also the most polluted. The dead are killing the river.

To put all these issues in perspective, the key religious-cultural issues that need a rethink are of two types:

One is about child and women’s rights. This would be the case in FGM, triple talaq, nikah halala and polygamy. These practices need banning. Even male circumcision, which is widespread, needs educative efforts where child rights are given greater emphasis than religious and cultural practices. What can be a choice made by men after they are adults, or a doctor’s decision, cannot be left to parents.

Then there is the larger question of cultural practices involving disposal of the dead, and here we need a multi-pronged approach.

In the case of Hindus, where the primary problem is ashes, the community needs to introspect and work on a plan where the amount of ashes immersed is a token amount (a pinch, or a bit more). Government policies on water bodies should allow for an enclosed area where water from a river or lake or even the sea is flown into a restricted area where ashes can be immersed, and the outflows back into the river or sea are filtered or treated before release.

In the case of burials, four points are worth making.

First, existing burial grounds in big cities are to be excavated and multi-level burial places created to economise on land use. Many communities already use multi-level burials, and there is no reason why this idea should not be extended to existing graveyards.

Second, new land should be given far away from the city, but subsidised hearse and transport facilities can be provided to make the burial process smooth and painless for the grieving relatives.

Third, churches and mosques that have lots of extra land should be incentivised to allow a portion of the grounds to be used for creating multi-level burial plots.

Fourth, of course, governments should encourage cremation for all communities, with only a small portion of the ashes being buried – in keeping with the tradition of burials, including some Hindu ones. One way to do it would be to sell land for such purposes only at near-commercial rates, so that the wasteful and horizontal spread of graveyards is discouraged. If the living can use high-rises, so can the dead.

For those who want to make this a religious issue, it is worth noting that in the US, half the people choose cremation over burial. This trend reversal from burial to cremation has happened in recent years, and has begun in India too. It needs to be encouraged.

The living find it tough enough to buy land for shelter, education and health facilities, and transport and social infrastructure. It makes no sense to give the dead priority over scarce land resources in urban centres. Even in rural areas, land for burials should be sold at close to market rates, so that the practice of swallowing large tracts of land by the dead is discouraged. It would be a travesty if job- and livelihood-creating land is procured for homes, infrastructure and factories at extortionate rates, but given practically free for the dead.