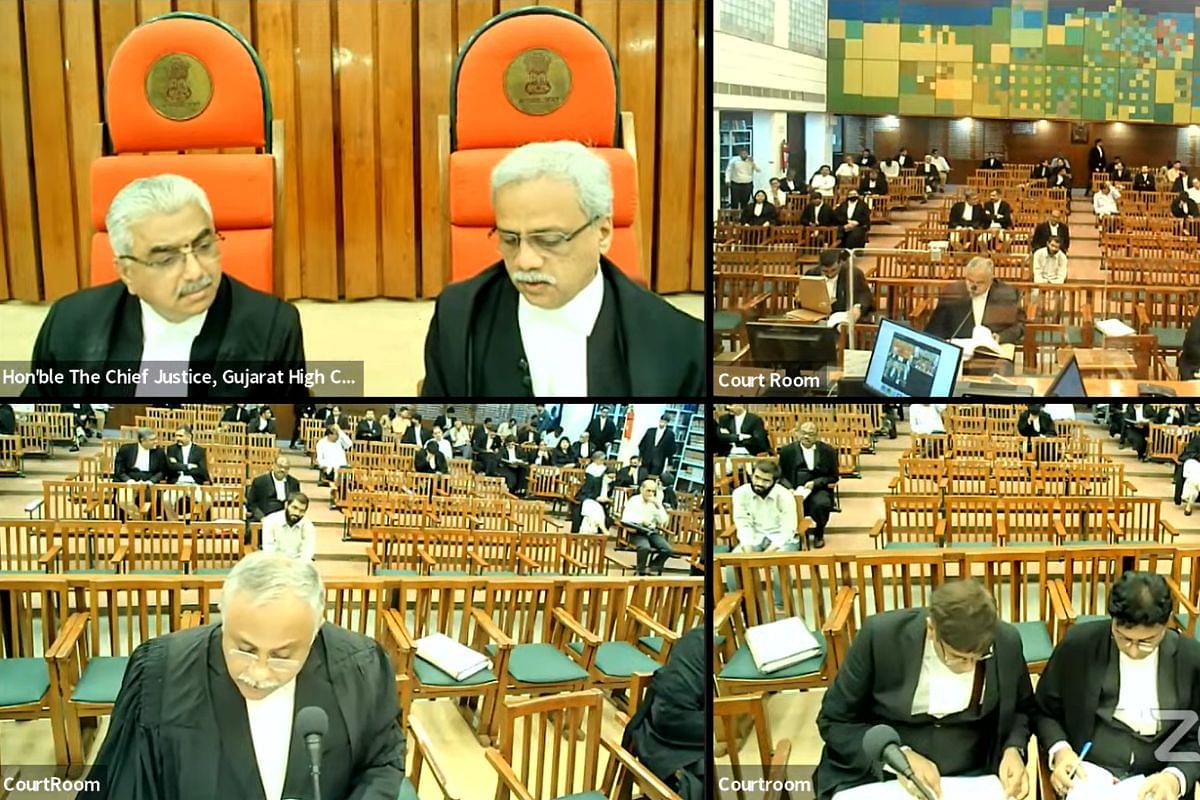 That old adage, ‘seeing in believing’ was never truer, than in the corridors of India’s courts of justice which for decades bore witness to another, sadder, saying: ‘Justice delayed, is justice denied’.

There is now a welcome recognition – in government and on the Bench – those delays extending over a decade, and the intolerable wait of lakhs of under-trials can no longer be left unaddressed.

That problem may not be susceptible to instant redressal, but one dramatic change has taken place, kick-started in a small way by the Covid-related lockdowns: The ability of litigants and lay Indians to see justice being delivered, in real time, with sound and image, on a YouTube channel that can be viewed on any device, even a mobile phone.

On 27 September, when the proceedings of the Constitution Bench of the Supreme Court are video-cast live, India will join a very small coterie of nations with a judicial system sufficiently confident in itself, to conduct its apex hearings in the full glare of its citizens.

The United States? No.

The largely conservative Supreme Court in the US has long agonised over whether judicial proceedings should be televised and broadcast live. It worries that with cameras in the courtroom, lawyers, even judges might seize the opportunity to ‘grandstand’ for the larger audience outside.

Today the US apex court only uploads audio of its proceedings, no video. District courts in 13 of the 50 states do likewise.

Their fears may be unfounded: When the “January Six committee” of the US Congress, investigating the attempted insurrection in the national capital on 6 January 2021 telecast some of its sittings earlier this year, the result was one of the highest viewership figures in US television history: nobody grandstanded; nobody disrupted.

As the Indian Constitution Bench begins its deliberations in a slate of high profile cases including the law regarding Economically Backward Classes, the issue of enhanced compensation to victims of the Bhopal gas tragedy of 1984, even the constitutionality of the law against sedition, lakhs of Indians with a personal or ideological stake in the matters, will be able to witness the process by which the decisions of the court are arrived at.

There are 493 matters pending before the constitution benches, so public interest will be massive.

Suggests The Times of India in an editorial: "If citizens can witness SC hearings that address the great questions posed by a voluble democracy, brutally competitive politics and social churn, two positives impacts are likely:

more interest in crucial matters that define India’s governance and greater accountability for SC judges and big name lawyers, who typically are the ones that engage in legal jousts before apex court constitution benches.”

Nevertheless, it is generally understood that it took the current Chief Justice of the Supreme Court, Uday Umesh Lalit, with the unanimous approval of the judges on the Bench with him two days ago, to set aside any misgivings and take the crucial decision regarding live-streaming the proceedings of all Constitution Benches.

This was something pending for exactly four years: On 26 September 2018, the apex court declared that live telecast of court proceedings should form part of the right to access justice, guaranteed under Article 21 of the Constitution, read with Article 14.

About a week ago, Supreme Court lawyer and former additional solicitor general Indira Jaising wrote to Chief Justice Lalit suggesting that the one-off live telecast of the formal farewell to retiring CJ, NV Ramanna, should take a more permanent form. In fact, she was one of the petitioners of the 2018 case that led to the decision then.

As a follow-up to the 2018 decision, the E-committee of the Supreme Court drafted rules governing “Live streaming and Recording of court proceeding”, in June 2021. Read PDF of the rules here.

There are reasonable restrictions on how the media may use these recordings and special protections and prohibitions for cases involving matrimonial matters, sexual offences, gender violence and the like.

Since then, six High Courts have implemented these guidelines, while commencing live streaming of all their court proceedings.

The National Informatics Centre has assisted the state courts in setting up the necessary infrastructure and till dedicated web channels are established, use is being made of the YouTube channel to enable lay citizens to see and hear any sitting in these high courts, live.

Public interest in the states has been palpable: When cases with large public interest, like the Hijab case in the Karnataka High Court was being heard, the live stream enabled lakhs of concerned citizens to hear lawyers for both sides present their case right up to the decision delivered on March 15 this year.

By and large the video streams have been technically sound and visually arresting, thanks to multiple cameras focused on the Bench and the litigators.

The Union Department of Justice has compiled all state high court video streams to a single site. At any time, a viewer can click on the state high court of Gujarat, Jharkhand, Karnataka, Madhya Pradesh, Orissa or Bihar to access every courtroom which is active then – or check the archives for earlier days and weeks.

(When we checked today, all states were accessible, with the exception of Jharkhand, which has, for some reason, restricted public viewing).

Next week, the Constitution Bench of the Supreme Court will add a link to this page that is already a vibrant, symbol of Justice seen, even while being delivered across the length and breadth of India.

(Additional resource: For those interested in how courts across the world stream their proceedings, there is a useful compilation by R. Mihir in Supreme Court Observer, a web resource from Bengaluru. It dates to 2021, hence some Indian state high courts are not reflected.)