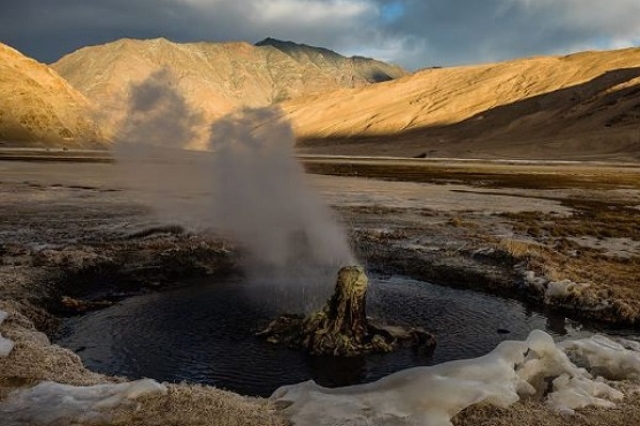 A hot spring in Ladakh.

India’s first geo-thermal project will be set up in Puga, a village in eastern Ladakh — the site for which has long been identified as a hotspot for geo-thermal energy.

A tripartite agreement has been signed between the Union Territory of Ladakh, Ladakh Autonomous Hill Development Council (LAHDC), and Oil and Natural Gas Commission (ONGC) in the presence of Ladakh Lieutenant Governor R K Mathur and Jamyang Tsering Namgyal, Member of Parliament, Ladakh.

“The signing of the MoU with ONGC for the first geothermal project in India is a promising initiative towards innovative and sustainable development of Ladakh and is also a step towards achieving the goal of carbon-neutral Ladakh,” the Lieutenant Governor said.

Governor Mathur also termed this as a 'historic step' towards a carbon- neutral Ladakh.

In Phase-1 of the pilot project, one megawatt of power will be generated, which will be distributed to the public free of cost, and ONGC will establish an agency to oversee its execution.

Mathur thanked ONGC for its efforts in commencing the project, and sought its earliest execution for the benefit of the people. He also hoped the project would achieve 400 MW capacity to fulfil the demand.

Sanjeev S Katti, Director-General of ONGC Energy, said this project will give round-the-clock energy to Ladakh, and hot water springs can be used for heating and establishing spring pools to attract tourists.

MP Namgyal thanked Governor Mathur for signing the agreement, and for helping Ladakh enter a new era of development. He also emphasised on the need to push forward the “Vocal for Local” concept in Ladakh, and make it self-sustainable in the long run.

Governor Mathur also said the government was learning from the successful examples of different countries which have dabbled in energy development, tourism and green house projects using geo-thermal energy.