Kerala’s Healthcare System Is Cracking; It Needs To Reach Out To Private Sector 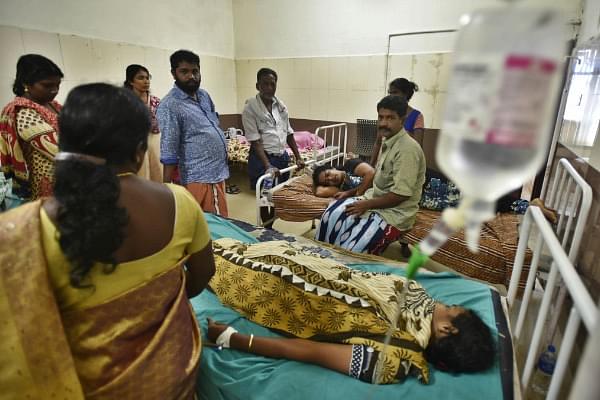 The good health of the citizenry is an important indicator of the well-being of any nation. Developed countries have achieved excellent health indicators by investing in healthcare. But it cannot be inferred that great health indicators can only be achieved in developed economies. Kerala set an example by achieving that on a par with developed nations amidst low economic growth till the 1980s.

Kerala belonged to a category of states with a high poverty ratio in 1973-74. The state’s economy began to develop only in the 1990s when the per capita income of the state exceeded the national average for the first time. The outstanding achievements in Kerala’s health sector during a period of low economic growth present an interesting paradox. How did the state achieve this at a time of economic sluggishness?

The state’s rapid progress in social indicators is often attributed to larger government spending in comparison to other states. However, there has been a noticeable decline in the quality of healthcare rendered in government medical institutions since the 1980s. This is mainly because of the decrease in capital expenditure in the health sector since that period. This has had a devastating effect on health infrastructure and supplies to government facilities, taking a toll on the quality of healthcare services.

According to a study done by Kannan et al (1991), the private sector had a balanced presence in both rural and urban areas. A study by National Institute of Health and Family Welfare on the universal immunisation programme among children aged 0-23 months in 1986-87 states that Kerala was able to achieve a coverage of about 90 per cent for all the vaccines. This would have been unattainable without the private sector. The availability of vaccines even in small private clinics and hospitals made it easily accessible for all.

The average number of beds per private allopathic hospital was 26 and 34 during the years 1986 and 1995 respectively, which indicates that a majority of the hospitals belonged to the category of less than 50 beds. Even now, 58 per cent of hospitals in Kerala have less than 50 beds. This stresses the role played by small private institutions in providing affordable healthcare even in rural areas.

The recent visit of the Kerala Chief Minister to the United States for his treatment has drawn flak from various spheres, questioning its need when Kerala itself has plenty of super-speciality hospitals and skilled practitioners, with infrastructure comparable to that in Western countries. The state also aims to promote itself as a hub for medical tourism by 2020 as foreigners can avail quality treatment at a fraction of the cost in the West. While the personal choice of an individual cannot be questioned, it is to be pondered if all the citizens have the same luxury to make choices in getting quality healthcare services within the state itself, which once boasted of affordable healthcare for all.

Kerala’s healthcare system faces the challenge of large out-of-pocket expenditure (expenses which are not reimbursed by insurance), which constitutes 95 per cent of the private health expenditure (Kerala Health Accounts 2013-14). The trend in increase of super-speciality hospitals at the cost of small hospitals raises the question of accessible and affordable healthcare for the average person.

The government is responsible for ensuring affordable and equitable healthcare for all. This is possible only by engaging small private medical institutions because a large share of the people among those going to private hospitals are dependent on such institutions. The involvement of small private players is also necessary for the government to fulfil its promise of comprehensive health insurance for all. If people cannot avail the benefits of health insurance from hospitals located nearby, such schemes will remain ineffective. Most people opt for small private medical institutions near their home for basic healthcare and acute cases rather than visiting government hospitals where health insurance can be claimed. According to Ramankutty (1989), people utilise services from private hospitals as travel and wait time are relatively lower in the private sector.

Many of the government schemes are provisioned through only around 200 empanelled private hospitals of a total of around 1,100 private hospitals. Only 10-20 per cent of the people going to these hospitals are covered under these schemes, where the amount offered is much less than the cost levied by the hospitals. Moreover, the lackadaisical attitude of the government in reimbursing expenses provides no incentive for private players to remain in the scheme, especially the smaller ones.

Blaming the private sector will not help in solving these vexing issues. The state needs to take a firm position on effectively engaging small private medical institutions and devise schemes mutually benefitting both government and private healthcare providers. This would be the path to attaining accessible and affordable healthcare.

Sara John is Project Associate, Centre for Public Policy Research, a think tank based in Kochi.