KSRTC: Why Continue To Prop Up A Dying Venture? 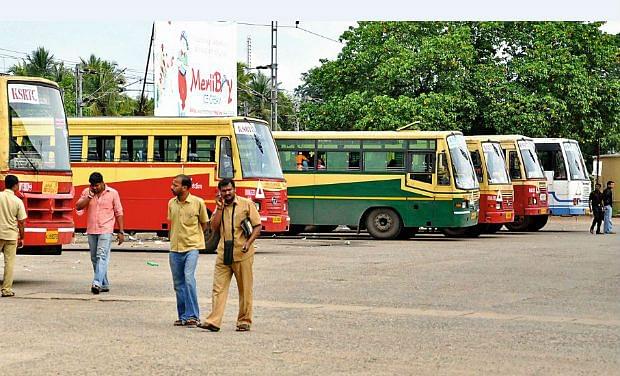 KSRTC buses at a depot.

The Kerala State Road Transport Corporation (KSRTC) has been given a special package of about Rs 3,000 crore to revamp itself and break-even in the 2017-18 Kerala budget. This, according to Finance Minister Thomas Issac, is on the basis of the Susheel Khanna report, specifics of which have not been released to the public. The suggestions made in the report (that are in the public domain) reflects what a standard review of transport public sector undertakings (PSUs) might show: increase efficiency, reduce breakdown rates, better utilisation of fleets etc.

In the budget speech, Issac mooted a “thorough restructuring and induction of professional experts” into the KSRTC. While this seems to be a practical and reasonable step for the survival of the entity, one might doubt the practicality of such a change, considering that removing mid-level and low-level employees is fraught with risks. It is a well-known fact that transfers/postings in PSUs, including the KSRTC are on the basis of political partisanship rather than merit. In such an atmosphere, one would only classify Issac’s words as rhetoric. The induction of experts into top-level positions of the company maybe a viable option, but it is nothing more than that. (One would ask why the professional experts are only being inducted now, but such a question loses relevance in the current context).

The other parameters that Issac moots are improvement in utilisation of fleet and average kilometres per bus. As noted in the Economic Review 2016 by the Kerala State Planning Board, 12 per cent of the fleet is under repair and 25.9 per cent are over aged. The breakdown rate is six per lakh kilometres for the KSRTC, and less than one for its counterpart in Karnataka. The KSRTC does not even have a time management system. This illustrates how bad the condition of the corporation is.

The biggest problem that the government of Kerala will face is restructuring of the corporation. It will be bringing down the average employees per bus, which is currently 7.2, down to the national average of 5.2. This will entail the firing of 10,000 workers. Such a move is completely impractical in the political landscape of Kerala. Trade unions such as Indian National Trade Union Congress and Centre of Indian Trade Unions will never allow such a move. Besides, the employees themselves are bearing the brunt of the corporation’s failure: they are receiving only 75 per cent of their monthly salary for now. There have been instances where the corporation has been unable pay pending dues for several months. The KSRTC spends more than 50 per cent of its earnings on salary dues – the dues amount roughly to Rs 77 crore a month, while the earnings by the corporation is Rs 149 crore a month. This means that the KSRTC is inherently unstable and its continued existence is not viable economically. The KSRTC suffers from accumulated liabilities of capital investment, dues to oil companies, repair and maintenance expenses, and the pension dues – which is Rs 27 crore for the company, with the other half being given as “grant” by the state government.

This has pushed the KSRTC into the massive debt trap that it currently finds itself in. Issac envisions this package as a last attempt to save the company and (hopefully) reach operational profit in 2017-18.

This seems very unlikely at the very least.

There have been, however, improvements in the KSRTC’s financials. According to the Economic Review 2016, the earnings per bus has increased and so has fleet utilisation (from 67 per cent 2009 to 75 per cent in 2016). But the other indicators are worrying – especially the expenditure and earnings, as well as the unsatisfactory marginal increase in earnings per bus.

The earnings from a single bus have to support seven employees of the corporation. This is far from the case. The corporation has to exponentially increase its earnings as well as shelve some of it concessions and operate purely on profitable routes. The marginal improvements listed above will not save KSRTC from ruin.

The KSRTC operates in almost 180 nationalised routes in the state, and the income generated from these routes, represent the majority of its earnings. The LDF government recently decided to limit the distance of private carriers within the state to 140 kms, in a bid to prop up the KSRTC – as it faced more than Rs 2 lakh loss per day as a result. The state government is essentially supporting an inefficient, perpetually loss-making (public) corporation over private players. This move actively lobbied and supported by the trade unions, going on to illustrate the amount of influence they have. In this context, one wonders whether the luxury of double duty afforded to employees will change, either.

The corporation, in a welcome move, is planning to shelve 1,819 routes that is loss-making. However, one wonders how such a large number of services continued to remain on paper, regardless of the record loss that KSRTC has caused the exchequer. The only difference between the past two financial years of the company is that it reduced losses from Rs 617 crore to Rs 613 crore. (It seems unlikely then, that the corporation is running only at a loss of Rs 18 crore per month, as filed before the Supreme Court)

It is time that the KSRTC is dissolved, and any government with any sense of fiscal responsibility would have done so, as has been argued earlier. But this is Kerala. And state-run PSUs exist to provide welfare employment, as that is its essential function. Issac’s decision to pump money into KSRTC’s revival plan seems to be brave and optimistic, but foolish in many ways. To take the KSRTC out of the woods, it is essential to not only have financial packages, but political will to stand up against the trade unions. However, this government is unlikely to take on the unions.

To a day were “fiscal responsibility” and “private” become acceptable terms in Kerala, I await, as the state continues slide into financial disaster.