Lessons From Noida: How To And Not To Go About Urban City Planning 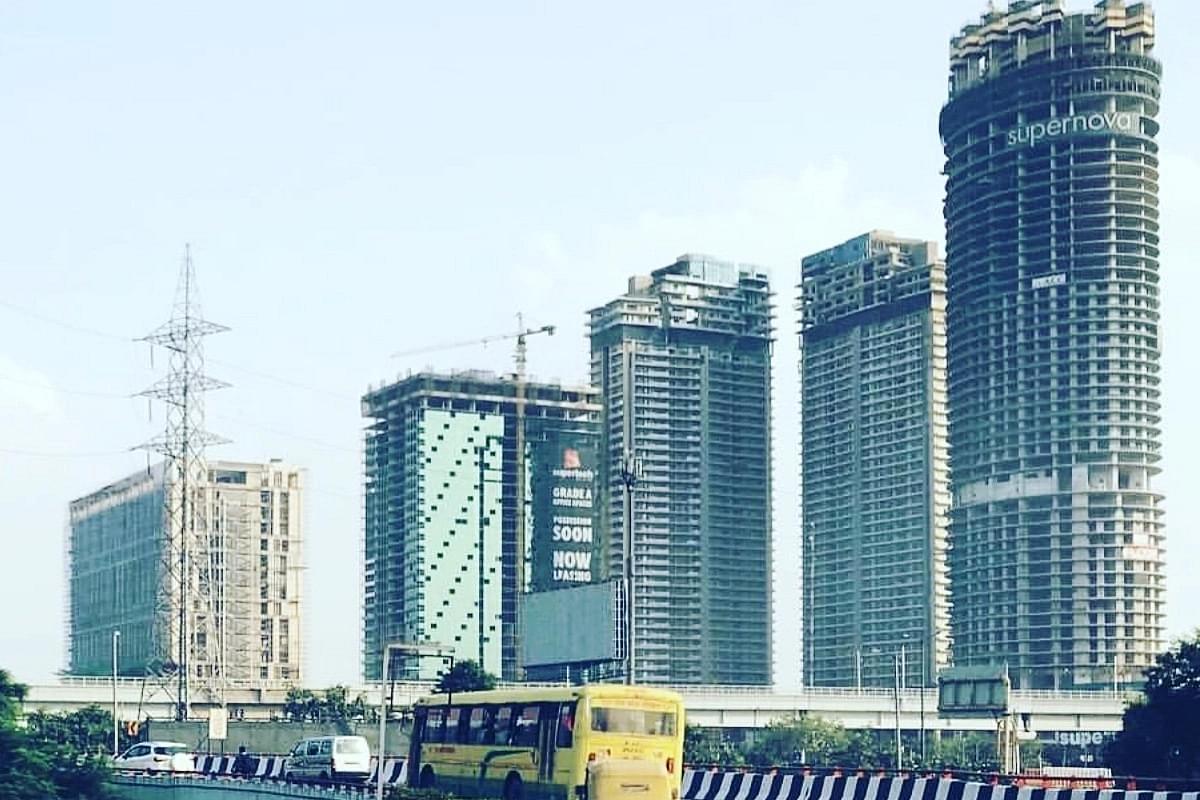 The next decade and beyond will be characterised by increased urbanisation in India.

Satellite towns will bloom into cities, and as the aspirational population from rural India climbs the economic ladder, the demand for real estate (mostly rented), automobiles, shopping malls, and other commercial spaces will steadily grow.

It is in this context that the future of urbanisation in India must be seen.

Unless there is a certain character and history to the city, as in the case of Mumbai, Delhi, Chennai, Bengaluru, and so forth, there is a limit to what the government can do.

However, when it comes to cities being built from scratch, a lot more wisdom is warranted.

Compare Noida, Gurgaon, and Delhi, for instance, making up a significant portion of the National Capital Region.

Only in the last two decades have the satellite cities bloomed into proper cities from villages. Until the early 2000s, one could count the number of malls in Gurgaon on one hand and vast spaces that, today house residential estates, were for farming.

Both Gurgaon and Noida are aspirational cities. An elaborate critique of the former was penned on the website, highlighting the infrastructural gaps.

Noida, fortunately, has fared better, but is still far from being the ideal urban city of an India aspiring to be a $10 trillion economy. Noida gives enough perspective to policymakers on how to go about city planning.

To begin with, what are the right lessons for urban planning from Noida?

One, the metro. The biggest win for Noida are the two metro lines. The Blue Line, that connects Delhi to Noida, and the Aqua line, connecting Noida and Greater Noida.

For the future, planners must factor in the need for metro as the city is progressing and not later, as evident by the demand in Bengaluru, Gurgaon, and Mumbai.

Noida’s Aqua Line is an interesting case study, given the low footfalls. However, five-years down the lane, it will be one of the busiest lines in the NCR metro network, given the increasing population density on the stretch.

Bottomline, plan for transit systems are far ahead of the demand for all satellite regions around Mumbai, Bengaluru, Chennai, Pune, and other economic centres.

Two, the roads. What differentiates Gurgaon from Noida is the width of the roads. In Noida, the policymakers went for wide roads, even within the sectors, compared to Gurgaon that gets jammed easily.

This is also beneficial during the rare rainy season, as there are no snarls or flooding on the roads with traffic moving seamlessly on most stretches.

For the future, policymakers must factor in the increasing automobile sales, and the number of migrants who shall buy their first car in the following decade.

As an aspirational economy, we are light years away from peak car demand, and the roads being built for the future must reflect this. More wide roads, please, with more underpasses or flyovers.

In the 70x region with close to a hundred thousand apartments (probably more), small shopping complexes and markets have come up. Most societies have a market of their own, further aiding the supply and demand.

This is an excellent example of planning, when viewed from the perspective of residents.

However, local governments must complement these markets with flourishing commercial spaces that add to the employment and trade prospects.

Four, the cleanliness. Relative, though, Noida is much cleaner than all the cities in Uttar Pradesh and most in India.

One must complement the local government for ensuring public restrooms at regular intervals on the roads, factoring the social realities on the ground. Most stretches across Noida are also maintained well.

A note must also be made about the law and order in Noida. Given the history of the state with law and order, one of the challenges for the local government was to ensure safety for the residents.

Outside the gated societies, there are enough patrol vehicles of the Uttar Pradesh police, even at odd hours. For each satellite city, this is indispensable.

NCR is an interesting case study. The state of Delhi, as a city, tells you why people prefer Noida and Gurgaon. Further, living in Noida tells you how Gurgaon should not have been planned. Furthermore, Noida tells you that malls and societies are no promise of good urbanisation.

Often, in Noida, many projects even after completion take a long time to ensure possession to the owners.

While RERA and local governments can fix this problem for the future, there are two other grave problems that must be a lesson for the policymakers. One, the poor build quality of buildings, and two, the anarchic residential welfare organisations.

While building audits are a must for the societies that were built in the last fifteen years, it doesn’t take away from the fact that many builders compromised on the materials used.

One of the builders, now bankrupt and previously endorsed by a famous cricketer, is infamous for building societies where all it takes is one's fist to crack the wall.

Many societies, through maintenance money, engage in repairs regularly. However, given the seismic activity in the region, the cost of building, it is imperative that real estate developers are given strict parameters to work within when it comes to construction quality.

As an anecdote, here’s what removing a poster does to a wall in one of the better societies of Noida.

The other problem is the non-uniformity of rules when it comes to societies.

The RWAs (residential welfare associations) suffer from the class-monitor syndrome, blocking bachelors at will, regulating cargo as per their convenience, and so forth. Therefore, it is imperative that the local governments frame rules that are consistent with the laws of the land.

Two, the roads and traffic management. While the planners have done well to ensure wide roads in most parts of Noida, they have faulted elsewhere. For starters, traffic bottlenecks around the Noida-Greater Noida expressway are common, resulting in long jams, as recorded here.

Traffic management is also in utter chaos. Random U-turns, speed breakers at every intersection, no proper halting area for battery operated vehicles or autos, and no specific lanes for heavy or light traffic reflect poor management of traffic. In some parts of Noida, parking on roads results in half of the road being rendered unusable.

India, in the next five years, will attain that threshold where development must be complemented by civic sense.

In Noida, wider roads are a license for many drivers to take the wrong way to dodge the U-turns. This is the kind of behaviour that must be heavily penalised. Traffic management is integral for any booming economic centre.

Three, the layouts and numbering. One can assume that the numbering of sectors in Noida was done over a lazy game of poker. As is the case with Chandigarh, it is important that new sectors and areas being carved and developed in the satellite cities are sequentially mapped and numbered for ease of access and future planning.

Ideally, it would be in the interest of the local governments to have the sectors or areas divided symmetrically, and not leave the carving out of areas to the highest bidders, as was the case in Noida.

As a consequence, patches of prime land in Noida today remain unoccupied or disputed because the planning was left to the builders.

There must be a plan in place to ensure no open drains. Be it Bengaluru, or Delhi, or Mumbai, and now, even Noida, the open drains are an eyesore.

Apart from ushering diseases and stench, they do takeaway from the city’s beauty. The onus therefore lies on the government of the day to ensure there is sufficient planning in place.

Urban heat islands are another problem in the making. In summers, the 70x region in Noida is an urban heat island. It would have sensible on the part of the government to carve out a huge green belt with trees and parks, quite like the Central Park in New York City, to counter the heat from the apartments. Small, scattered parks, without trees, are not good enough.

Four, the connectivity. Noida’s local metro is one of the best in India, but the metro from Greater Noida is a case of bureaucratic foolishness, as explained by the author in a ground report from September 2019. Today, a project has been sanctioned to connect the metro to Greater Noida with the entire Delhi Metro, but at an inflated cost.

Beyond Noida, the lessons from Bengaluru, Chandigarh, Gurgaon, Mumbai, Kolkata, Pune, and elsewhere are similar. Have a regional transit system that connects the satellite cities to the main economic hub. An early investment in the transportation network may not give short-term returns, but is always beneficial in the long-term, as Delhi Metro proves.

For long, urban planning has been dictated by developers looking to maximise their economic returns, leaving residents and future governments helpless.

As the smart city programme gains steam, and the macro infrastructure (highways, expressways, regional rapid transit systems, airports, etc) improve, it would be ideal to focus on the micro details too in our cities.

The road to a $10 trillion economy goes through eight-ten regions, each with at least half-a-dozen satellite towns under development, and this is where these lessons in urban planning must be deployed.