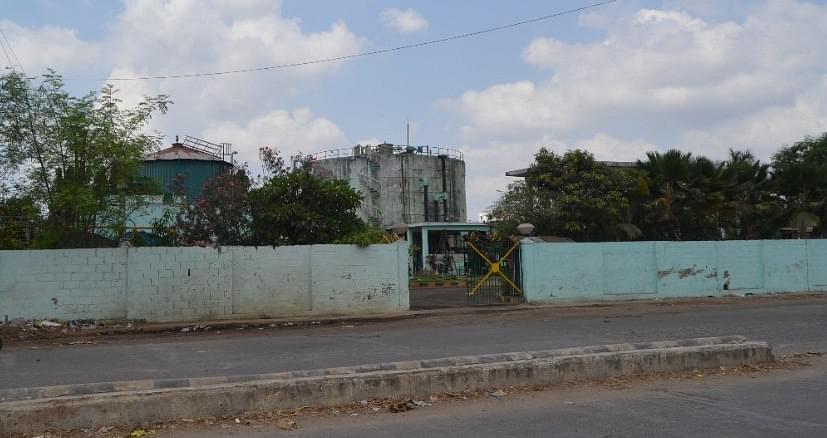 The bio-gas plant complex at Koyambedu, Chennai, that generates power from bio-degradable wastes.

During the day, Chennai Metro Bus Terminus at Koyambedu, one of Asia’s largest, is hard to miss, for any traveller given the traffic there. During nights, no one can miss its bright lights. The story behind the bright lights is that a part of the terminus electricity needs is met by a bio-gas plant some 750 metres away.

The bio-gas plant that converts wastes from fruits and vegetables into electricity has been in existence for more than a decade now, just outside the huge Koyambedu market complex. The plant was conceived as a pilot project mainly to mange solid wastes being created at the market complex.

Solid waste management is a big issue in the country, and its sanitation. In states like Tamil Nadu, Karnataka, Delhi, Maharashtra and Kerala, failure on the solid waste management front has led to increase in vector-borne diseases like malaria and dengue. A record number of more than 1.5 lakh dengue cases were reported last year until 4 October with the number of fatalities being 226.

“The Koyambedu market complex generates nearly 200 tonnes of solid wastes a day. The bio-gas plant makes use of 30 tonnes of bio-degradable waste from the complex every day to produce an average 1,000 to 1,300 kilowatts of power. Though the plant uses only part of the generated waste, it is an objective lesson of putting bio-degradable waste to better use in the days to come,” says a source connected with the project. (He would not want to identify himself as he is not authorised to speak to the media.)

The pilot project was launched in 2006 at a cost of Rs 5.5 crore with Rs 3.75 crore coming from the Centre in the form of financial aid to help manage solid wastes through the Ministry of Non-Conventional Energy Resources. The state government has chipped in with the rest. The plant, which had a German machine, ran without any problem until the second half of 2011 when it developed a snag.

“The German machine couldn’t work under Indian conditions. As a result, the plant was in a limbo for two years. A machine was then brought in from the Czech Republic, and since 2014 it has been functioning without any problem,” the source said.

The plant uses ‘macerator’, an equipment to crush the vegetables and fruits into a paste, which is then stored in a silo to generate bio-gas.

The bio-gas plant actually needs fruits and vegetables that produce more starch than water content. This was the reason why the plant ran into problems in 2008 when it could not source enough supply from the market complex.

The wastes are brought from morning to evening by vehicles that are specially deployed. Most vendors in the complex keep the wastes in a bin and deliver it when the vehicle collecting the waste arrives at their outlet. In some cases, the vendors accumulate the waste in a particular area, which is then collected by the vehicles and taken to the plant.

“Each vegetable and fruit has a different capacity to produce bio-gas. Some like pumpkin produce more. Though the average amount of power produced is 1,000 to 1,300 kilowatt, the plant produces even more depending on the inputs used,” the source said.

The stored bio-gas is then led into another silo to run the generator and produce power. The power thus generated is fed into the state electricity board grid to supply power to the bus terminus. Tamil Nadu Electricity Board pays Rs 3.15 for every unit of power that it draws from this plant.

The plant operates for less than 12 hours a day but plans are afoot to run it 24 hours. “Plans are ready to increase the supply of vegetables from the market complex to 50 tonnes and produce more power. But it will take some time to realise,” the source said.

A report in The Hindu said the plant would be upgraded with an addition of a ‘digester’ that will be able to use waste from slaughter houses and restaurants in the neighbourhood. It would also help treat sewage and banana stems to generate bio-gas. The upgradation was expected to be completed by 2016 but nothing has been done yet. Once the ‘digester’ is added to the plant, it can supply bio-gas to some 2,000 houses in the vicinity.

The Central Leather Research Institute (CLRI), Chennai, is the technical agency that is monitoring the pilot plant’s progress. CLRI will also help in the plant’s upgradation.

A feasibility study undertaken by ICRA said that the plant can produce 4,000 kilowatts of power if at least 40 tonnes of bio-degradable waste are used in the plant.

According to Chennai Metropolitan Development Agency, the bio-gas plant can help in reducing the waste by nearly 60 per cent, depending on the composition and technology that is adopted. The plant will help reduce environmental pollution, it said.

While bio-gas is generated from the crushed vegetables, the process results in a byproduct being produced. The crushed vegetable remains are converted in dried solid cakes. The cakes are bought by private companies and used in gardens as fertilisers.

What has got the bio-gas plant going at its capacity is the state government’s decision to allow Ramky Enviro Engineers Limited to operate and maintain it. In addition, it has been given the responsibility of removing the solid wastes from the market complex.

Though the progress has been a little slow, the bio-gas plant is expected to help in management of solid wastes, which breed mosquitoes, in a big way over the next few years.

Tamil Nadu government authorities were unavailable for comment on either the plant, its expansion plans or problems faced by it.