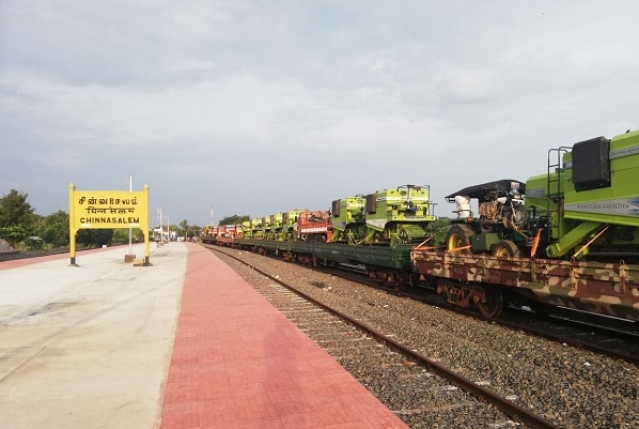 Paddy harvester being taken out of Chinnasalem.

With the spread of the Coronavirus (COVID-19) pandemic affecting passenger traffic as train operations were suspended, the think-tank in Indian Railways has begun looking for other avenues of revenue, especially through its commercial wing.

In order to meet the challenge of earning more revenue, the Railways has set up Business Development Units (BDU) in almost all of its departments.

The search for new avenues of revenue led to the Railways to tap in an opportunity to transport mechanical paddy harvesters from the Salem region to other parts of southern India.

There are at least 3,000 mechanical paddy harvesters in Chinnasalem, some 90 km from Salem and 250-odd km from Chennai, that are transported every year by road to Odisha, West Bengal, Karnataka, Maharashtra, Kerala, Andhra Pradesh and Telangana for harvest operations.

The Hindu BusinessLine reported that in Udupi and Dakshina Kannada districts alone, nearly 90 per cent of the farmers who have cultivated paddy in about one lakh hectares prefer to use harvesters to harvest paddy.

“Until last year, the harvesters were taken by road in trucks and tractors. This was time-consuming and expensive too,” said Michael.

Expenses in transporting harvesters by road include fuel and toll charges, besides wear and tear.

That 3,000 harvesters being moved from Chinnasalem to Karnataka and Andhra Pradesh presented a good business opportunity to the Railways, whose commercial division team began negotiations with the owners of the harvesters.

“The idea had been there early on, but getting the orders was a challenge. Many rounds of negotiations had to be held with the owners and costs were worked out,” says Michael.

Ultimately, it worked out to be a win-win situation for fall. For the owners of harvesters, it was transporting their machines at an economical cost and for the Railways, it was the much-needed revenue.

Farmers also stood to gain as these harvesters could reach their farms on time, instead of waiting nervously, given various delays and risks in transportation by road.

“All the stakeholders stand to gain from this. This is a seasonal activity, but we hope this arrangement will continue,” the PRO said.

With the finer aspects of the arrangement worked out, the Southern Railways operated its first service transporting 85 vehicles to Nalgonda in Telangana.

The Railways transported not just the harvesters, but also tractors, trucks and mini-lorries along with them that carry these tractors to the farms.

The Southern Railways followed this by operating two rakes with 100 vehicles to Suratkal near Mangaluru in Karnataka.

According to sources, another rake left Chinnasalem for Eluru in Andhra Pradesh yesterday (3 November).

One of the advantages that these owners of harvesters have is that they can simply roll in their vehicles on to the wagons at Chinnasalem and then roll off at their final destination.

This is the sort of RO-RO system seen in some of the seaports.

“In Chinnasalem, the owners made use of a ramp to load on to the wagon,” Michael said.

According to experts, the Commercial Division will have to get various clearances, particularly while crossing bridges, before such operations are commenced. There are issues with the height, especially on electrified tracks. These clearances came in quickly.