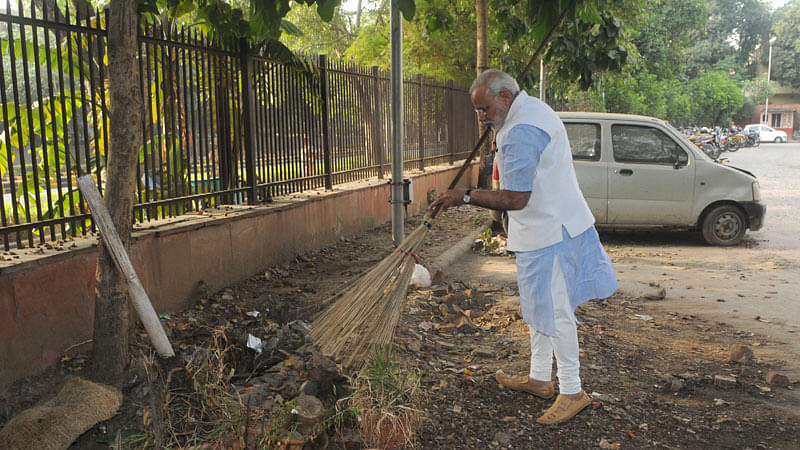 "A clean India would be the best tribute India could pay to Mahatma Gandhi while celebrating his 150 birth anniversary in 2019," said Prime Minister Narendra Modi as he launched the Swachh Bharat Mission on 2 October 2014.

The main objective of Swachh Bharat Mission is to completely eliminate open defecation in India by 2019. The other objectives of mission include setting up door-to-door collection of all of the country’s garbage, converting all inorganic trash to generate energy, setting up massive new capacity in sewage treatment plants and bring about behavioural shift on sanitation among masses . The mission also seeks to end the widely prevalent practice of “manual scavenging.”

Despite persistent criticism, the government has gone about implementing the programme in a mission mode. Swachh Bharat Mission Gramin (rural) has, within 3 years, performed tremendously: Nearly 2.3 lakh villages, 177 districts and five states have been declared Open Defecation Free (ODF) as per the latest data from Mission website.

We talked to Mr. Parameswaran Iyer, Secretary, Ministry of Drinking Water and Sanitation about the Mission, its successes and challenges and his own experiences of working with the Indian government and the World Bank on sanitation issues.

Swachh Bharat Mission has been one of the most successful government schemes in the recent years. What do you think has been the biggest contributor towards this?

The most important game changer in the programmes has perhaps been the involvement of the Prime Minister who has put Swachh Bharat Mission as one of the top flagship programmes of the country. As a result, the programme has gathered a momentum unparalleled by any sanitation programme so far. In addition to this, the programme has captured the imagination of the country as everyone can relate to the issue of swachhta/cleanliness. Now that it has been put squarely on the national agenda, people have responded very positively. For us, in the Swachh Bharat Mission-Gramin, we are primarily looking at two things:

The more this programme becomes a Jan Aandolan, the more successful it is going to be, and that is the direction it is heading in.

What makes Swachh Bharat Mission different from previous such initiatives of the government such as Total Sanitation Campaign (TSC) and Nirmal Bharat Mission (NBA)?

Unlike previous sanitation programmes, the Swachh Bharat Mission focuses more on outcomes, i.e. ODF villages and districts, than outputs, i.e. toilets constructed. The programme is about the usage of toilets through behaviour change and not just construction. But the biggest difference is the personal involvement of the Prime Minister and the kind of political capital he has invested in the issue of sanitation.

You were handpicked by the PM to overlook this mission, to bring in a specialist’s perspective on the government’s affairs. Do you think we need more specialists like you in Indian administration?

Let me begin by saying that I feel very privileged to be doing this job. I had taken voluntary retirement from government services and then worked with the World Bank in the sanitation and water sector. I think that we need both specialists and generalists to run a programme of this magnitude and complexity. We are a federal country and this mission too has the same structure. We need to have people who understand the nuances of the system at all levels. At the same time, we are providing technical support to all the states. So a healthy balance of both capabilities is needed to manage a programme like Swachh Bharat.

You have worked on sanitation and water issues in a number of countries including some in South East Asia. How are challenges faced in India different from those faced by other nations? Are there any similarities?

Sanitation is a global issue and is one of the sustainable development goals (SDGs). India has one of the major sanitation programmes in the world. But other nations too have their own issues. Nations like Indonesia and Bangladesh in Asia and Ethiopia in Africa are running very successful programmes. There are similarities in the problems faced by people in all such countries such as chronic diarrhoea among children leading to stunted growth, economic problems and issues related to dignity and security of women.

All these countries have adopted different approaches to the problem. A number of countries, including India, focus on behaviour change. For this Mission also, construction of toilets is only incidental, and the focus remains on bringing a change in the attitude of people towards usage of toilets. In Vietnam, one of the triggers that worked was convincing mothers of the ill-effects of open defecation on their children’s health. Both India and Vietnam have the component of ODF in their programmes. Vietnam, however, does not face water issues like India. Thus, there are both similarities and differences.

One of the major differences for India is the scale of the programme. When the Mission started, there were 55 crore people in rural India defecating in the open, the number has now come down to 32 crore. India is scaling up its sanitation programme very quickly as compared to other countries and is implementing it in a mission mode.

A number of reports indicate that despite the new construction of toilets, a number of people continue to defecate in the open due to their old practices. Is open defecation a behavioural issue more than lack of access?

Absolutely. And as I said earlier, this is one of the key ways in which Swachh Bharat Mission is different from the previous sanitation programmes. We have recognised that constructing toilets is not enough. Behaviour change communication is a key focus area in SBM, and we do not count a village or block or district as ODF unless all residents have not only built but are also using toilets.

How are you targeting behavioural change, especially given the fact that the audience is vast and diverse?

Behaviour change is at the heart of this programme. We have a component of Information, Education and Communication (IEC) which is basically about how do we reach out to people and convince them through whatever means to not defecate in the open. This has two major parts:

1. Mass media which includes television, radio, newspapers where we can hit a large audience and

2. Interpersonal communication where we engage with communities at the grassroots level. For this, there is a swachhagrahi, who is a grass root level motivator who works directly with the community. This process of engaging the household and community is difficult and time-consuming. But it is worth the time and investment because behaviour change is an issue that needs to be tackled at all levels.

Even though the guidelines require 8 per cent of the total SBM-Gramin budget to be dedicated to Information, Education and Communication (IEC) activities for the financial year 2016-17, till 10 January 2017, only Rs 56 crore had been spent, amounting to approximately 1 per cent of the total expenditure up to that month. Why is there such a poor resource allocation to such a crucial aspect?

Behaviour change through IEC is the cornerstone of SBM. There is a major focus on IEC at the national, state and district levels. The centre spends 3 per cent of the union SBM budget on IEC, while the states are supposed to spend 5 per cent of their respective state+centre budgets on IEC. As per a recent order issued by the ministry, spending the stipulated amount by the states on IEC will be a pre-condition for the release of funds to the states from the next instalment, onwards of 2017-18.

That said, it is important to realise that apart from the money spent by the states on IEC, the ministry and the states mobilise tremendous support from development partners and carry out IEC activities through them, which doesn't reflect in the official IEC spending. It must also be emphasised that change in deep-rooted habits is not merely a function of the amount spent on IEC, but is brought about by wholesome behaviour change communication efforts.

It has been seen that in some cases local and district bodies inflate the numbers for toilet construction in their haste to achieve the ODF tag. What is the government planning to do about such issues?

There is a multi-stage verification system at the district and state level for all reported figures on our MIS. The SBM-G guidelines recommend that a village be verified within three months of declaration of ODF. Of the 2 lakh ODF declared villages, nearly 1.5 lakh have been declared ODF only in the last year. Over 1 lakh villages have already been verified, and the ministry is laying a strong emphasis on the states for verifying the remaining villages at the earliest. Completion of verification of all villages which have been ODF for more than three months is now a pre-condition for release of funds to the states from the next instalment onwards of 2017-18.

Once a village achieves ODF status. What are the next steps to sustain its achievement?

There are two parts to this. Before a village is declared ODF, a due process is followed where a self-declaration is done, first by the village panchayat, followed by a verification by an external agency typically within 90 days, as I said, followed by a sustainability check within 180 days. The Ministry of Drinking Water and Sanitation has issued a protocol on sustainability. The previous programmes did not have an emphasis on sustainability of the ODF status, and there were frequent slip backs. However, in this programme, there is a rigorous verification process at the local, district and state level and then a third-party verification at the national level. Thus, sustaining is about providing incentives, having mechanisms at the village level (such as the nigrani samiti). While there may be occasional cases of slip backs, we are very clear that the programme has to focus on sustainability.