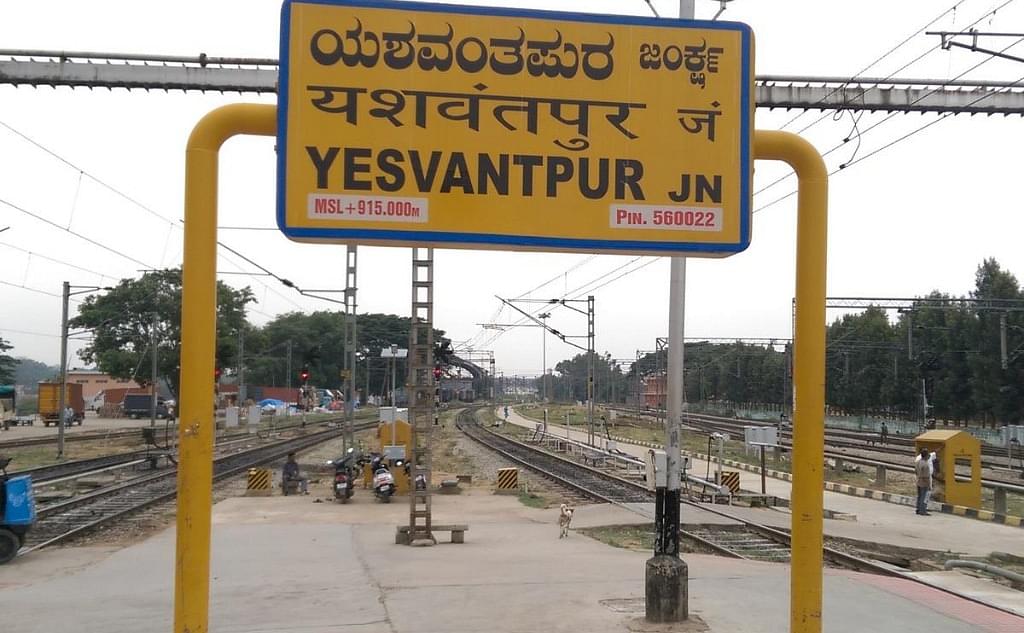 Karnataka’s capital Bengaluru is not known to be much of a rail-based city. In fact, it has a very substandard railway network compared to other cities of its stature such as Chennai, Pune and Hyderabad. In his budget speech in February this year, Finance Minister Arun Jaitley announced the allocation of Rs 17,000 crore to develop a 160-kilometre commuter rail system (CRS) or suburban line for the city.

Of the few railway lines spanning the information technology (IT) capital of India, the one with the most potential is also the most underutilised – the 66 km-long line connecting Yesvantpur Junction (YPR) and Hosur (HSRA) in Tamil Nadu passes through Lottegollahalli, Hebbal, Banaswadi, Bellandur Road, Carmelaram, Heelalige and Anekal Road before crossing the inter-state border.

While a dedicated train was flagged off from Banaswadi towards Heelalige in March, this only solves part of the problem.

So How Can This One Track Solve Such A Large Problem?

The YPR-HSRA track connects several crucial localities that are both commercial and residential in nature. It partly mirrors the highly congested eastern crescent of Outer Ring Road and parts of Hosur Road.

The entire line is currently a single non-electrified track. It needs to be doubled and electrified and South Western Railways (SWR) needs to start running both regular electrical multiple units (EMUs) and air-conditioned (AC) EMUs. Mumbai got AC EMUs earlier this year and the response has been positive. Bengaluru, too, needs AC local trains given that the city has the highest number of AC buses on its roads.

Almost all stations on the route are important. Hebbal station lies to the west of the Hebbal flyover, which is a major intersection along Outer Ring Road and Bellary Road, leading to the Kempegowda International Airport (KIA). A branch line connects Byapanahalli station on the Bangalore-Chennai railway line, where the Purple line of the Namma Metro terminates currently.

Bellandur Road is an important station located near a densely populated residential and commercial area that has a preponderance of IT firms.

Carmelaram station lies at the intersection of Sarjapur Road, which is home to a large Wipro campus among other commercial ventures. The most crucial station on the stretch from a commuter perspective, however, is Heelalige station.

So, What Needs To Be Done?

The first step towards building the CRS in Bengaluru – on all lines, not just the one being discussed – is to set up a special purpose vehicle (SPV) on the lines of the Mumbai Rail Vikas Corporation (MRVC). The MRVC is a joint venture between Indian Railways and the government of Maharashtra to expand the infrastructure for Mumbai’s Suburban Rail. Karnataka had signed an agreement towards the setting up of an SPV last year.

The second step would be doubling and electrifying the entire line, including the branch line passing through Byapanahalli station. It is important that the powers at work ensure that the start of the line is at Yesvantpur via Hebbal and not just at Byapanahalli.

The third step would be to give all the stations en route a complete overhaul. All stations must be given proper raised platforms that are fully covered, feature footbridges or subways to cross tracks, proper entrances and exits with parking areas and bus stations. SWR can look at commercialisation of the railway property once footfalls increase.

An intermediary step would be to add more railway stations on the route. Between Banaswadi and Bellandur Road, there are no stations. An additional station can be built to cater to parts of C V Raman Nagar. The Bellandur Road station must be upgraded to cater to localities such as Marathahalli and Varthur.

The fourth step would be to get the Bangalore Metropolitan Transport Corporation (BMTC) to start operating feeder buses from the new railway stations to the localities they serve. Buses should ideally be a mix of AC and non-AC vehicles so that every potential commuter is covered.

For example, BMTC can run a bus from Carmelaram station along the length of Sarjapur Road, covering the Wipro campus and the residential neighbourhoods around it. Buses can be run from Bellandur Road to various tech parks along Outer Ring Road. Lastly, buses must be run between Heelalige and Electronics City – covering Phase 1 and 2 of the tech district along with residential localities such as Neeladri and Begur.

The upcoming Yellow Line of the Namma Metro connects the R V Road terminal with Bommasandra. The terminal station is roughly 5 km north of Heelalige station. The Bangalore Metro Rail Corporation (BMRCL) should logically explore the feasibility of extending the line, first to Narayana Hrudayalaya and then to Heelalige.

From Yesvantpur, three tracks head north. The main line heads to Tumkur before going towards Hubbali and Belagavi and ultimately Pune. The remaining two lines proceed towards Lottegolahalli after which they split. While one line heads towards Yelahanka en route to Hyderabad, the other line continues on towards Hebbal. The line that connects to Yelahanka then connects to Devanahalli, passing below the approach road to KIA. SWR should explore the feasibility of building a station in the vicinity and also a new track that can take trains from Hosur towards KIA.

If government bodies from both the Centre and state come together to expand the YPR-HSRA line using the suggestions made, it would certainly reduce the time the average Bengalurean spends stuck in traffic jams. Who knows, for it might even make traffic jams at Central Silk Board, a thing of the past.