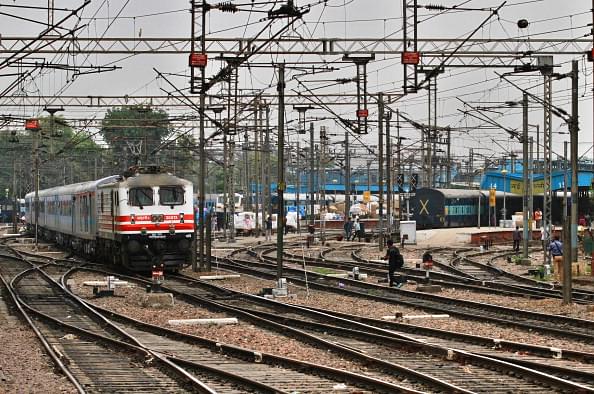 The passenger train sets off during the trial run of a ‘semi-bullet train’ between New Delhi and Agra from New Delhi railway station. (Arun Sharma/Hindustan Times via Getty Images)

India is working towards a bullet train project, the basic premise of which is high speed coupled with economical fares for high-density routes. This project has seen much commentary and promise of a large investment, but what has been missed alongside is the crawl at which India’s existing trains are chugging along.

Not just speed, punctuality of the railways has been suffering too.

This piece says almost 30 per cent of trains ran late in 2017-18, the Indian Railways’ worst performance in three years. Of the 17 zones, the North Central Zone, which includes Kanpur, Tundla, Agra and the stretch till Mughalsarai, was the least punctual. According to data presented in Lok Sabha in March this year, almost every third Rajdhani and every third Duronto train was delayed between 1 April 2017 and 10 March 2018. Every sixth Shatabdi train and almost every fourth mail/express train was delayed too. In fact, 451 mail/express trains were delayed every day during this period. These significant delays across the rail network were reported even when trains arriving 15 minutes after their scheduled time were not included in the list.

Remember, the Railways is the country’s biggest passenger transporter, ferrying more than 22 million people across its network each day. Such frequent delays mean loss of time and surely have significant economic fallout as well. In the Lok Sabha reply quoted above, Minister of State for Railways Rajen Gohain said, “on an average, 451 mail/express trains were delayed per day during current financial year due to various factors, some of which were beyond the control of the Railways. However, some of these trains got consistently delayed largely on account of dense fog, large number of speed restrictions for ongoing track maintenance and infrastructure augmentation works over Indian Railways network”.

How clogged is the current rail network? A senior official in the Railways Ministry had said earlier that almost 60 per cent of the ‘busy’ routes are over saturated and since the Railways tries to operate more trains on these routes to tackle passenger rush, the speed suffers. He gave the example of the Delhi-Mughalsarai leg, which has a capacity of 65-69 trains a day each way but the Railways has had to operate almost 90 trains (freight as well as passenger) each way on this route last fiscal. “This automatically means that time taken for the same distance on this route is almost doubled due to capacity constraints,” this official said.

Now, in bid to improve its worsening financials, the Railways is also in the midst of trying out a 'sweating of assets' which means using lay over portions – the time period between a train’s arrival at the destination and its departure again – to push in more journeys. The plan this fiscal is to add 64 trains a day due to this sweating of assets. While this may be a welcome move for harried passengers, especially during festivals and other peak seasons, what this will do to train speeds and punctuality is anybody’s guess.

Railways Minister Piyush Goyal said in a Quora post recently that maintenance work is also affecting the Railways’ punctuality but things will get back on track in the long term.

“Our dedication to safety in the form of track renewals, block time for track maintenance and maintenance of rolling stock has helped reduce consequential train accidents as well as fatalities. The investments made in safety will affect punctuality in the short run, however in the long run these investments will ensure there are less accidents that cause delays. In this regard, we are following the mantra of 'short term pain for long term gain'."

In the Hindustan Times report quoted earlier, Railway Board Chairman Ashwani Lohani has attributed the delay in trains to the overburdened infrastructure and increased focus on safety. “We are operating beyond capacity. In Northern Railway, most of the section is choked and at some places, we are operating at almost 150 per cent of the capacity,” Lohani said.

So it is a toss-up between safety and speed on the Indian Railways? Data show the number of accidents fell last fiscal. During the last three years, the number of consequential train accidents decreased, from 135 in 2014-15 to 107 in 2015-16 and further to 104 in 2016-17. In 2017-18, the number of consequential train accidents further reduced to 73. As maintenance closes off large parts of busy tracks and trains slow down, punctuality will surely suffer. But will a balance between maintenance and punctuality be achieved anytime soon, is the big question.