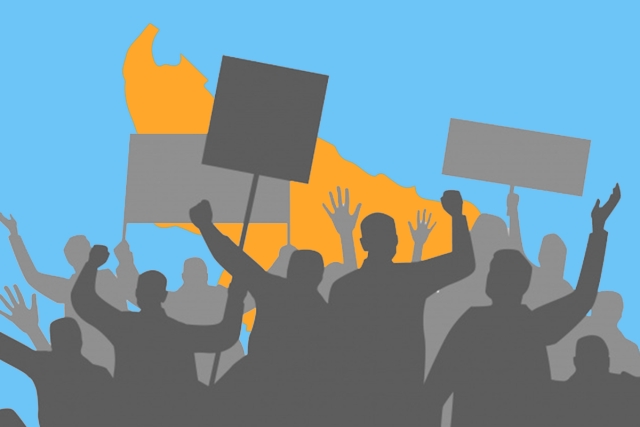 A power unrest in Uttar Pradesh came up on Monday when the employees in the state power department began an indefinite 'complete work boycott'. The situation was successfully diffused on Tuesday.

The strike was in response to the call given by the UP Vidyut Karmachari Sanyukt Sangharsh Samiti. The samiti was protesting against the proposed privatisation of the Purvanchal Vidyut Vitaran Nigam Limited, the Varanasi discom.

The government said that it had preparations in place in order to deal with the protesters. These included identifying critical power stations that would need beefing up security, and an action plan that would involve alternative staff taking over power transmission and distribution systems, if the need arises.

Earlier, the UP Power Corporation Limited (UPPCL) management, on its part, had reportedly held talks with the Sangharsh Samiti leaders.

It tried to persuade them to withdraw the call for boycotting work. This did not pan out well. The reason being given is that the management reportedly rejected the proposal "for effecting reforms in the energy sector without privatising it."

Shailendra Dubey, chairman of the All-India Power Engineers Federation (AIPEF) said that the full day work boycott would happen from Monday "as per the pre-declared plan" after the UPPCL management turned down the reform proposal from AIPEF.

Dubey accused the UPPCL management of misleading the government. He also appealed to Uttar Pradesh Chief Minister Yogi Adityanath to intervene in the matter.

The next day — on Tuesday — the government decided to withdraw the privatisation plan for electricity distribution companies, and UP power employees called off their indefinite strike against the proposed privatisation.

This development took place after the state government assured the employees of the company that it would not go ahead with the move — if the situation of UPPCL improves.

A meeting was held with protesting employee unions that lasted nearly five hours. An agreement was signed after the meeting with state Power Minister Shrikant Sharma working on the situation.

Here is what the agreement said: state power distribution companies will strive to improve power supply and operational efficiencies within the existing framework and any privatisation proposal in future will be made after taking the employees and authorities into confidence.

The agreement also says that Sharma will hold monthly review meetings until 15 January. "He will take stock of progress in the distribution utilities."
This report says: The government and the employee unions agreed to take measures to make the power distribution areas corruption-free, and bring billing and collection efficiencies.

With the situation easing, the government said that no action will be taken against protesting power department employees, and that it would withdraw the FIRs registered during the two days of protests and boycott.