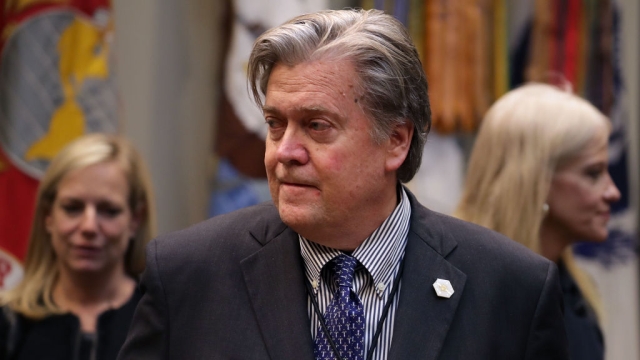 White House chief strategist Stephen Bannon had resigned from Breitbart News, a far-right digital media platform, exactly an year ago this month to join Donald Trump’s presidential campaign team as its manager. After winning the Presidency, Trump appointed him White House Chief Strategist, a position from which he has now been ousted. “White House Chief of Staff John Kelly and Steve Bannon have mutually agreed today (18 August) would be Steve’s last day. We are grateful for his service and wish him the best,” Press Secretary Sarah Sanders said in a statement.

Within hours of his ouster, Bannon returned at the helm of Breitbart News website and chaired the outlet's evening editorial meeting on Friday. "I feel jacked up, now I'm free. I've got my hands back on my weapons. Someone said, 'it's Bannon the Barbarian. I am definitely going to crush the opposition. There's no doubt. I built a f***ing machine at Breitbart. And, now I'm about to go back, knowing what I know, and we're about to rev that machine up. And rev it up we will do,” the Weekly Standard quoted Bannon, as saying.

This also gives credence to reports which stated that Bannon had resigned on 7 August but events in Charlottesville, Virginia over the weekend caused a delay in his departure. Bannon had planned in advance what he was going to do once he left the administration.

Bannon is credited with playing a crucial part in electing Trump president and his removal marks a remarkable rise and fall for a rightwing ideologue regarded by some as the power behind the throne. His absence makes more room for figures such as Trump's son-in-law Jared Kushner and the national economic council chair, Gary Cohn who are often called by Trump’s core base as “White House Democrats”.

In a recent interview, Bannon had said that he was fighting internal battles daily with officials in treasury department, National Economic Council and Goldman Sachs lobbyists who are trying to prevent Trump from “draining the swamp” - a term popularised last year by Trump to uproot the corrupt system in Washington D.C.

Breitbart Editor-in-Chief Alex Marlow welcomed Bannon back by saying that Breitbart had "gained an executive chairman with his finger on the pulse of the United Sates President Donald Trump agenda."

Bannon made it clear that he was going to war, however, not with Trump but for him. “If there’s any confusion out there, let me clear it up: I’m leaving the White House and going to war for Trump against his opponents — on Capitol Hill, in the media, and in corporate America,” Bannon said.