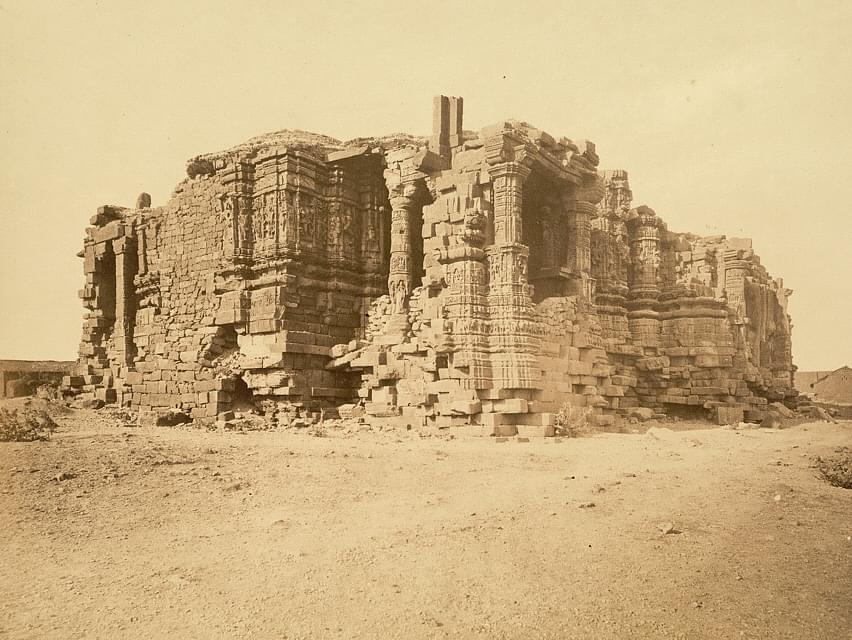 The ruins of Somnath Temple before it was rebuilt by Sardar Patel and K M Munshi. (Wikimedia Commons)

Today (11 May) marks 70 years since the restoration of the Somnath temple in Gujarat. It was on 11 May, 1951, that the first president of Indian republic Rajendra Prasad had led the reconsecration ceremony of the lingam at the temple.

Sri Somnath temple is considered first among the twelve Jyotirlingas of India. The temple has an utmost significance among the adherents of Sanatana Dharma.

The temple was destroyed numerous times by foreign invaders during the medieval ages between 11th and 18th century. Yet the temple has become a symbol of native resistance and resilience as Hindus had rebuilt the temple each and every time it was destroyed.

Lastly, Mughal ruler Aurangzeb who ruled a major part of Indian subcontinent from 1658 to 1707 AD ordered the demolition of the temple.

After India’s Independence from the British rule and the accession of Junagarh State into Indian Union, Sardar Vallabhbhai Patel, the then Union Home Minister, pledged that Somnath will be reconstructed and restored to its original glory.

When Patel broached this subject with Mahatma Gandhi, Gandhi endorsed the plan but said that the contribution for the reconstruction of the temple should come from the public. Patel accepted this advice.

With the demise of Patel, the task of the restoration of the temple was ably led by K M Munshi, a cabinet minister in the government.

On 11 May 1951, Rajendra Prasad, while presiding over the opening ceremony of the temple, gave a stirring speech. He said that the physical symbols of our civilization may be destroyed, but no arms, army or king could destroy the bond that the people had with their culture and faith. Till that bond remained, the civilisation would survive. He added that it was the creative urge for civilisational renewal, nurtured in the hearts of the people through centuries that had once again led to the praan-pratishta of the Somnath deity. Somnath was the symbol of economic and spiritual prosperity of ancient India, he said. The re-building of Somnath will not be complete till India attains the prosperity of the yesteryear.

In another indicator about the significance of the Somnath Temple, in January 2021, the temple trust appointed Prime Minister (PM) Narendra Modi as its chairman, making him the second PM after Morarji Desai to hold the position.

Prior to Prime Minister Modi, Desai was the only PM who had served as the iconic temple trust chairman. He had held the post for a long period from 1967 to 1995.