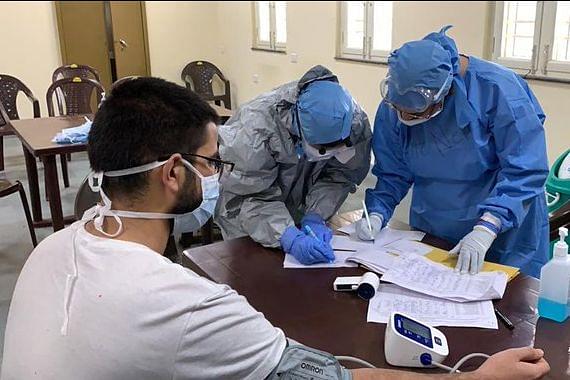 The ITBP quarantine facility in New Delhi (Pic Via Twitter)

As many as 112 people, including 36 foreign nationals, who were evacuated from China’s Coronavirus-hit Wuhan city and has been kept in isolation for 14 days at the Indo-Tibetan Border Police’s (ITBP) Chhawla facility in Delhi, will start leaving the premises from Friday (13 March) after being tested negative for the Coronavirus (Covid-19), reports ANI.

"All 112 persons housed at the ITBP Quarantine Facility, Chhawla, New Delhi including 36 foreign nationals will start leaving the facility from today after being tested negative for coronavirus test," the ITBP said.

All 112 persons housed at the ITBP Quarantine Facility, Chhawla, New Delhi including 36 foreign nationals will start leaving the facility from today after being tested negative in #CoronaVirus test.
Sh Nityanand Rai, Hon'ble MoS Home will meet & address the people at the centre. pic.twitter.com/Z0YghEACMR

Minister of State (MoS) for Home Affairs Nityanand Rai will meet and address the people at the centre, the ITBP said.

According to the report, this is the third batch of evacuees. They were brought to the quarantine facility on 27 February.

Earlier on Tuesday (10 March), ITBP officials had said that no fresh symptoms of coronavirus were seen in the 112 people housed at its Chhawla facility.

All the suspected patients had tested negative for the Coronavirus in the first sampling. Of the 112 people, 76 were Indians while the rest are foreign nationals.

As per the report, the foreign nationals who were quarantined included 23 from Bangladesh, six from China, two each from Myanmar and Maldives, and one each from Madagascar, South Africa and the United States.

It should be noted that the Coronavirus, which originated from Wuhan in China, has spread to over 100 countries infecting over 1,30,000 people and killing around 5,000.