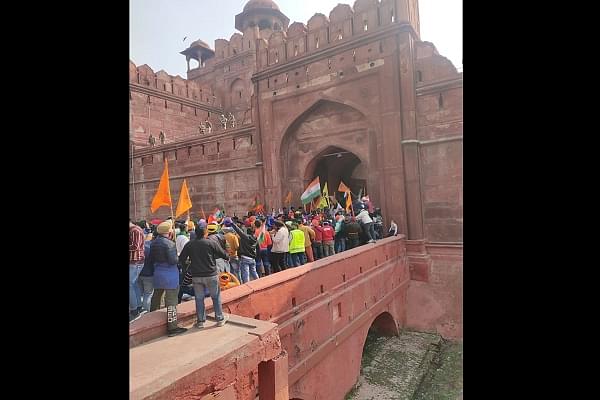 Hundreds of farmers riding tractors, bikes and cars reach Red Fort portico and enter its premises and hoist the farmer union flags and saffron pennant with a Sikh religious symbol on the first rampart of the iconic 17th century monument.

While this was going on, around 200 artists of Republic Day parade were stranded since around 12 noon near Red Fort due to the tractor rally. They were later rescued by the Delhi Police after being stuck for almost two hours in the afternoon, provided refreshments and subsequently escorted away, a senior officer said.

Around 200 artists of Republic Day parade were stranded since around 12 noon near Red Fort due to the tractor rally have now been rescued by Delhi Police. pic.twitter.com/S1o1L87gNa

According to Vikas Bhaduria of ABP news, around 250 students who had come to participate in the republic day parade were stuck inside the Red Fort. He also stated that they were scared seeing the hooligans outside before being rescued by the police.

Yesterday, the tractor rally meant to highlight demands of the farmers unions quickly took a violent turn as the protesters refused to adhere to the regulations of the police. The mob stormed the Red Fort after breaking through barricades at different border points in Delhi.

Video footages showed protesters attacking the police personnel with lathis and swords in hands. They were also seen ramming their tractors in the buses parked by police in the ITO area of the Capital.

Thousands of farmers from Punjab, Haryana and western Uttar Pradesh have been camping at the several borders of the national capital since 26 November last year demanding the repealing of the three farm laws. Eleven rounds of talks of farmers with the farmers in last two months have remained inconclusive.