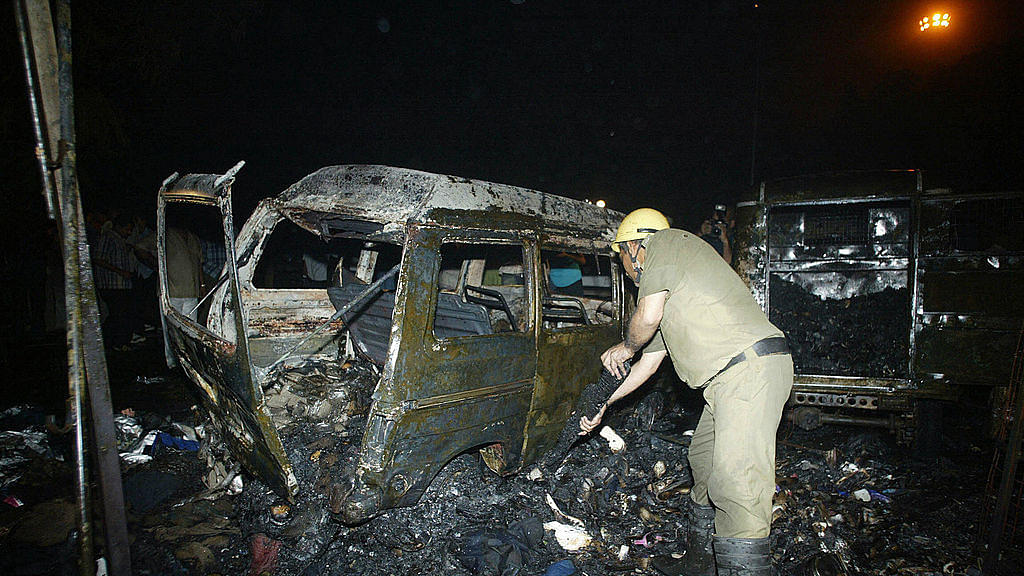 An Indian policeman inspects the wreckage of a vehicle following a blast at Sarojini Nagar market, 29 October 2005 in New Delhi. (RAVEENDRAN/AFP/Getty Images)

The mastermind of the 2005 Delhi Serial Blasts, Tariq Ahmed Dar was sentenced to ten years imprisonment by a Delhi court on Thursday. Two other accused, Mohammed Rafiq Shah and Mohammed Hussain Fazili have been acquitted of all charges. But Dar has also been set free by the court as he has already completed his sentence before the sentence was pronounced yesterday.

The series of blasts in Sarojini Nagar, Kalkaji and Paharganj areas of Delhi, that took place on October 29, 2005, had killed 60 and left more than 200 injured. Tariq Ahmed Dar, Mohammed Rafiq Shah and Mohammed Hussain Fazili of Lashkar-e-Taiba (LeT) were arrested and charges were subsequently framed against them in 2008. They were accused of waging war against the state, conspiring, collecting arms, murder and attempt to murder.

But additional Sessions Judge Reetesh Singh acquitted all the accused from Srinagar of all the charges. Acquitting Shah who was accused to planting a bomb in a DTC bus that injured 13 people, the judge noted, “The prosecution has been unable to prove beyond reasonable doubt that it was Mohammad Rafiq Shah who had planted the bomb in the DTC bus on.’’

Apart from these three, there were two other terrorists who had also been chargesheeted but they had pleaded guilty and were convicted by the court in 2014.